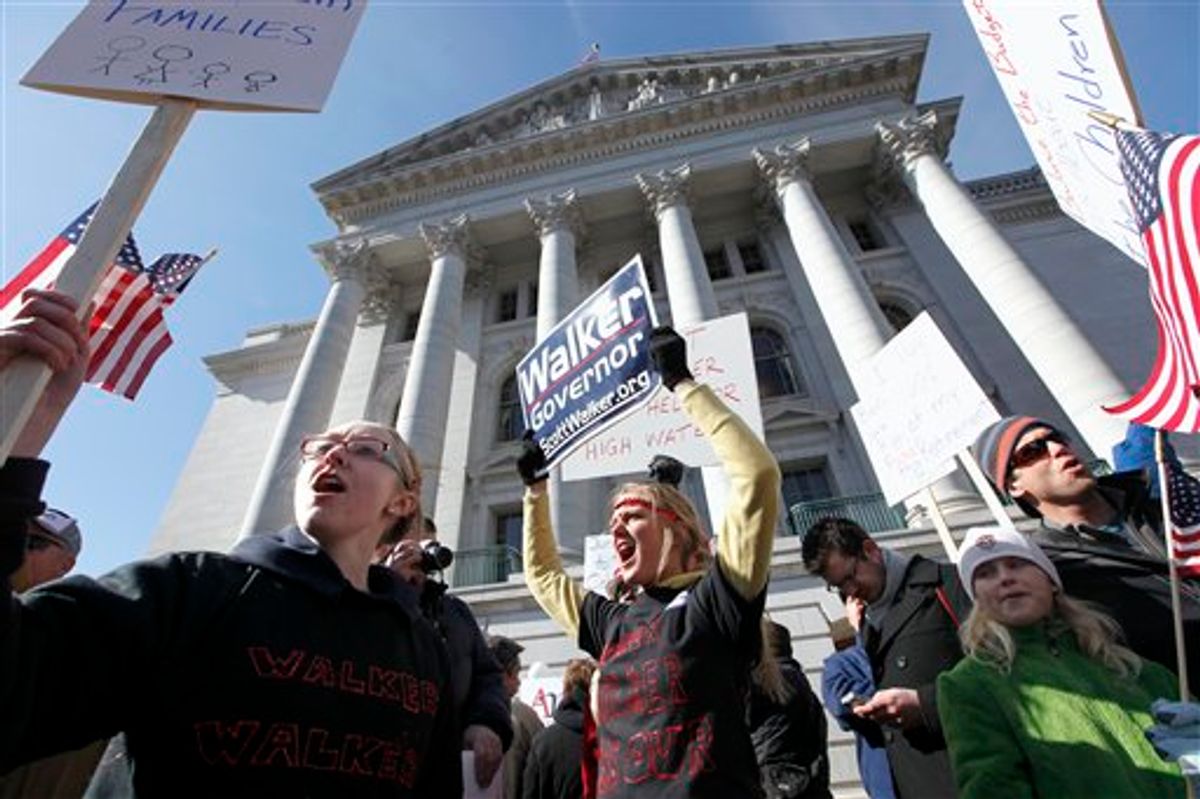 Scott Walker supporters, from left, Elise Kurz , Aimee Hilber, Haddie Carlson and her father, Brucestand, demonstrate outside the Wisconsin State Capitol during a rally on Saturday, Feb. 19, 2011 in Madison. A few dozen police officers stood between supporters of GOP Gov. Scott Walker on the muddy east lawn of the Capitol and the much larger group of pro-labor demonstrators who surrounded them. The protest was peaceful as both sides exchanged chants of Pass the bill! Pass the bill! and Kill the bill! Kill the bill! (AP Photo/Wisconsin State Journal, John Hart) (AP)
--

It took Scott Walker only a few weeks to push the Capitol into political chaos.

The newly elected Republican governor of Wisconsin has set his sights on forcing public workers to pay more for benefits as he looks to balance the state's budget -- savings he needs to help cover the cost of tax cuts he demanded the day he took office.

Democrats, who are no longer in power, have likened Walker to a dictator, and demonstrators protesting a contentious Walker-backed labor bill have waived signs comparing him to ousted Egyptian leader Hosni Mubarak. Even President Barack Obama has weighed in, calling the bill "an assault on unions."

Just seven weeks into his term, the 43-year-old son of a preacher has shown no sign of compromising. He has a GOP majority in both houses of the Legislature that has already helped him make good on campaign promises.

Walker insists that his push to force concessions from public employees by doubling their health insurance contributions and requiring them to pay half their pension costs is all about balancing the budget and not busting unions. But the bill also would strip them of most collective bargaining rights.

"I got elected to get Wisconsin working again and to improve the economy," Walker said in an interview with The Associated Press. "At the same time it meant fixing our budget crisis."

Wisconsin faces a $137 million budget shortfall by July. The concessions Walker seeks from the state workers would save $30 million over four months. He would balance the budget this year mainly through refinancing debt.

The increased pension and health benefit costs would save Wisconsin $300 million over the next two years, which would help buy down a projected $3.6 billion shortfall.

Michael Grebe, a Milwaukee business leader who has been a close Walker adviser and friend for the past 20 years, said the governor's proposal was consistent with his political philosophy and budgets he put forward as Milwaukee County executive that also targeted unions for concessions.

"If people are at all surprised by this then they haven't been paying attention," Grebe said. "He really does believe in skinny budgets and protecting the taxpayers. What he's doing now is completely consistent with that."

As county executive for eight years before elected governor, Walker never proposed a higher property tax levy than what was approved. To pay for that, he repeatedly sought to impose wage and benefit concessions on county workers, but was blocked by the unions and Democratic-controlled county board.

Now he has a Republican-controlled Legislature backing him all the way.

"I've always been bold," Walker said. "I've been bold at the county, which is why there's always been a lot of passion there for folks who supported me and those who opposed me, and I'm bold here, too. But you gotta be. We have no choice. Again, we're broke. We don't have any more options."

As proof that unions knew they would be targeted, Walker points to a flier circulated during last fall's campaign by union AFT-Wisconsin that warned that Walker wanted to curb the unions' power to negotiate.

In December, weeks after the election, he even suggested the possibility of abolishing unions altogether.

Anyone who didn't see it coming must have been in a coma, Walker said.

Union leaders insist they were blindsided.

"There wasn't any belief he was going to go for the nuclear option," said Gary Steffen, president of the Wisconsin Science Professionals, the union that represents state scientists, including crime lab analysts, biologists, chemists and foresters. "We expected concessions, but we just didn't think there was a mandate for this. We didn't see him getting rid of collective bargaining."

Union anger over the proposal set off a massive protest not seen in Madison since the Vietnam War era. Walker unveiled the bill on a Friday and four days later more than 10,000 people came to the Capitol in protest. By the end of the week, the ranks had grown to nearly 70,000, as schools closed around the state because teachers called in sick to join efforts to defeat the bill.

Assembly Minority Leader Rep. Peter Barca said Walker's goal was to "ram it through in less than a week to avoid scrutiny and discussion."

Walker has been in hyper-drive, calling the Legislature into special session the day he took the oath of office and asking them to pass tax cuts for businesses, make sweeping lawsuit reform and other changes. He got everything of consequence that he wanted.

The business tax cuts he pushed through added about $117 million to the projected two-year deficit, fanning anger among Democrats and unions that Walker argues he has to target public employees to balance the budget when he's found money for the tax breaks.

In an effort to slow down the union bill, Democratic senators skipped town on Thursday, delaying action in the state Senate indefinitely by leaving it one vote short of a quorum. The Assembly adjourned on Friday and didn't plan to take up the bill until at least Tuesday.

If anything, they say, the protests are only hardening support. Walker's office says he's getting 1,000 e-mails an hour, nearly all of which express support.

"There's a quiet majority out there who want us to do the right thing," Walker said. "This is bold politically, which is why there is all this attention, but it is still modest in terms of what we're asking in terms of our government employees."

The concessions amount to an 8 percent pay cut for the average worker.

Unions still could represent workers, but they could not force employees to pay dues and would have to hold annual votes to stay organized. Only wages below the Consumer Price Index would be subject to collective bargaining, anything higher would have to be approved by referendum.

In exchange for bearing more costs and losing bargaining leverage, public employees were promised no more of the layoffs or furloughs they've had to deal with for more than two years. The next forced unpaid day off was scheduled for Monday, Presidents Day, and state workers were sure to be out in force protesting at the Capitol.

Grebe, Walker's longtime friend, said he has been in regular contact with the governor since the protests started and he believes the activity is only reinforcing his belief the bill is the right way to go.

"I don't think it has affected his resolve at all," Grebe said. "He is committed to this."