Will labor strife in Wisconsin cascade across the country?

Strapped budgets across the U.S. have many wondering if Wisconsin labor dispute will beget similar scenes elsewhere 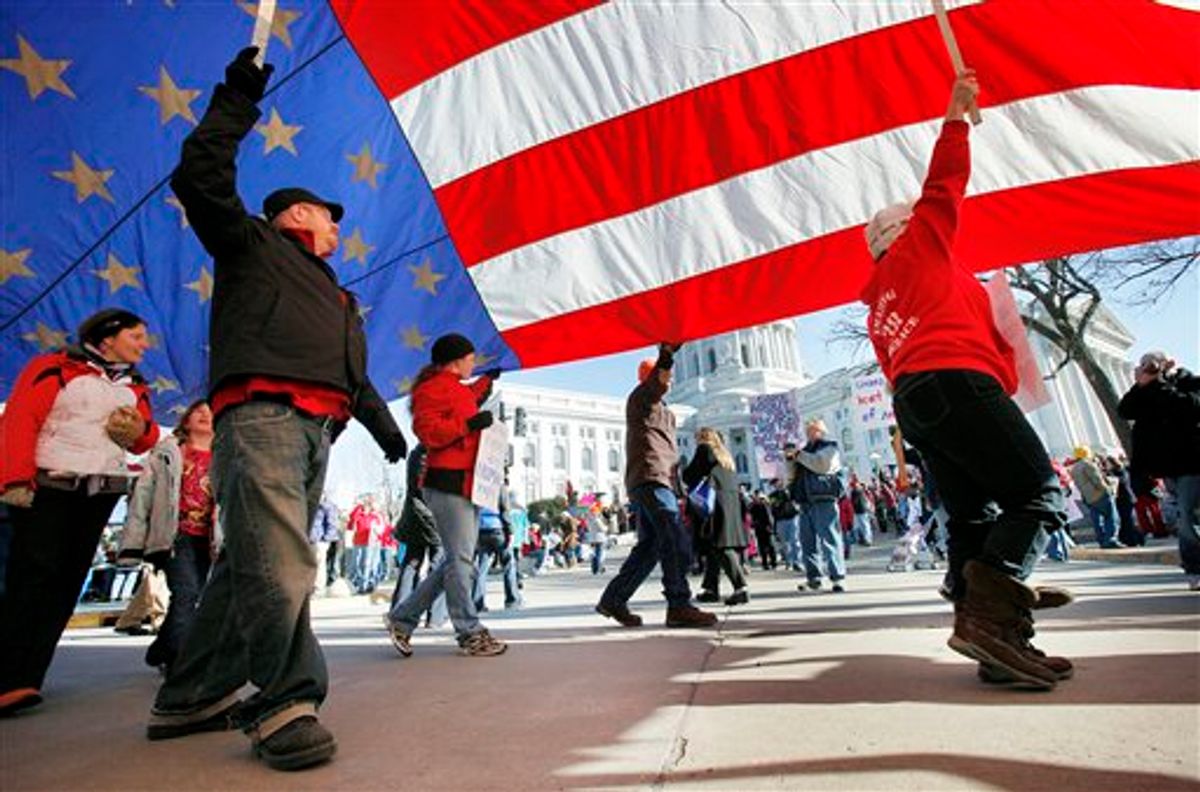 Protesters walk around the state Capitol with an American flag in Madison, Wis., Saturday, Feb. 19, 2011. A few dozen police officers stood between supporters of Republican Gov. Scott Walker on the muddy east lawn of the Capitol and the much larger group of pro-labor demonstrators who surrounded them. The protest was peaceful as both sides exchanged chants of Pass the bill! Pass the bill! and Kill the bill! Kill the bill! The Wisconsin governor, elected in Novembers GOP wave that also gave control of the state Assembly and Senate to Republicans, set off the protests earlier this week by pushing ahead with a measure that would require government workers to contribute more to their health care and pension costs and largely eliminate their collective bargaining rights. (AP Photo/ Wisconsin State Journal, Michael P. King) (AP)
--

Wisconsin has captivated onlookers as it evolves into what some are calling ground zero for a nationwide standoff over organized labor in the public sector. Major budgetary battles loom large on the horizon, and Wisconsin's Scott Walker is just one of several governors who are considering big cuts to union benefits for state employees. Rumors are already swirling about similar legislative battles in states like Ohio, Tennessee and Indiana, and action against organized labor there could instigate further protests. In short: The scene in Wisconsin could be prelude to a national event.

Given that the two major media stories of the moment have inundated the American public with images of protests, both at home and in the Middle East, it's unsurprising that people are beginning to draw comparisons. That being the case, the big question of the moment becomes this: Will the labor fight cascade out from Madison across the U.S.? Or, as the New York Times succinctly put it: “Is Wisconsin the Tunisia of collective bargaining rights?”

We've taken a look at a number of other states at the precipice of major labor battles in the coming months, and present them here for your perusal:

Ohio: As in Wisconsin, Ohio's state Senate is considering a bill to strip some state employees of collective bargaining rights. The bill in question would also "eliminate tenure as a consideration when deciding on layoffs, require workers to pay at least 20 percent of their health insurance premiums and institute merit-based pay for some public sector workers," according to CNN. Unlike in Wisconsin, Ohio Republicans hold a large enough majority in the Legislature to meet quorum with or without Democrats present, meaning an exodus such as occurred in Wisconsin is unlikely.

Protests over the controversial measures began in Ohio even before Madison turned into a national spectacle. In fact, union members packed into the statehouse as early as Feb. 9. Demonstrations escalated on Friday, as nearly 4,000 public employees gathered in the capital to voice their opposition to state Republicans.

Like Scott Walker, Ohio Gov. John Kasich was elected in the November landslide. He has indicated interest in overhauling collective bargaining, and believes that public employees who strike should lose their jobs. A vote has not been schedule yet on the collective bargaining bill, but there will be another hearing sometime this upcoming week.

Tennessee: Things are also heating up in Tennessee after the state Senate's Education Committee forwarded a bill to abolish collective bargaining rights for teachers. Both Senate Republicans and the Tennessee School Boards Association are strongly advocating for the bill's passage, a move that would declaw the Tennessee Education Association. Republicans hold a large House majority in the state's legislative body, though no vote has been scheduled yet. Still, as the Education Committee voted on the bill last Wednesday, there were stirrings of a Wisconsin-style showdown:

Hundreds of spectators gathered in Legislative Plaza hallways for the vote, most of them TEA members wearing stickers that said, 'Stop It.' But there were also substantial numbers of people representing school boards and a sprinkling of tea party activists who supported the measure.

Pennsylvania: State workers in the Keystone State are paying keen attention to events unfolding in Wisconsin. Indeed, Pennsylvania's new governor, Republican Tom Corbett, made a number of promises during last year's campaign that, if enacted, would likely upset public-sector unions. Those include overarching goals, such as balancing the budget, as well as more specific tasks like shrinking the state government, modifying the pension system for public employees and changing collective bargaining rights.

Unlike a number of other newly minted governors, Corbett didn't make unions the primary antagonists of his campaign. It remains unclear how Corbett will choose to address the expiring contracts, and his position won't likely be clarified until next month, according to PennLive.com. What would happen, though, if Corbett did choose to emulate Wisconsin's Gov. Walker?

It’s likely the Legislature would need to amend Act 195, which gave state, county, municipal and school district workers collective bargaining rights in 1970. If that happens, you can expect the fight to carry on at school districts across the state.

New Jersey: Chris Christie is doubtless the biggest name of all the freshman governors looking to institute policies of fiscal austerity. The New Jersey governor appeared in Washington last week for a much-touted speech in which he railed against government spending. While Christie hasn't indicated yet how he plans to deal with unions in his 2011-12 budget -- slated for release next week -- he did voice support for Scott Walker's "strong action to balance his budget." Add that to his combative posture around state spending, outspoken disdain for entitlements -- not to mention the much-circulated video of him lambasting a teacher during a town hall meeting  -- and there's at least some reason to believe that the New Jersey governor might decide to target public sector unions in some way, shape or form.