One artist explains why the country's hardest-working celebrity is good for us. (Somehow, this involves Borges) 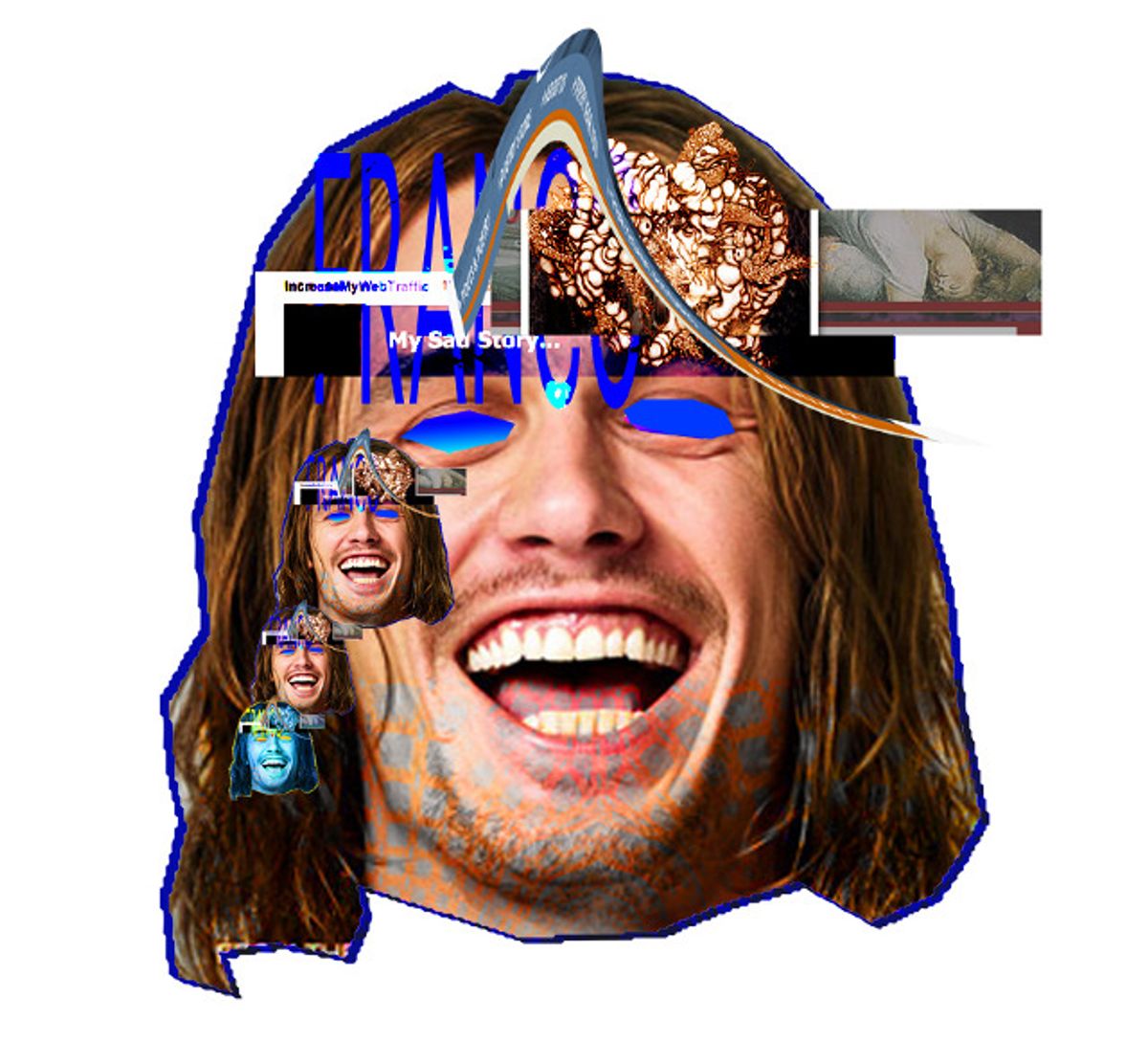 James Franco as you've never seen him before
--

We are a nation obsessed with James Franco. That doesn't mean we like him. At this moment in time, the 32-year-old actor might be the most versatile artist of our generation, with the ability to pick up almost any creative endeavor on a whim -- from writing novels to portraying Allen Ginsberg to cutting an album to creating art installations that will appear in scenes in "General Hospital," for which Franco is also portraying a character named Franco who makes art installations (oh god, our collective headache!) -- and get instant recognition for his "accomplishments." Not to mention that this weekend he'll be both hosting the Oscars and is up for a best actor nod for "127 Hours," meaning that he might have to miss a class at Yale, where he is earning his Ph.D. in literature (don't worry, he'll make up the credit). Oh, and he is set to teach a class called "Master Class: Editing James Franco ... with James Franco" at some place called Columbia College Hollywood, a class that is either cleverly po-mo or the most narcissistic thing a Hollywood actor has ever attempted, depending on how you look at it. But you know this already, because James Franco news has saturated all forms of media, from tabloids to the New York Times.

What Brooklyn artist Nic Rad posits in his "Celebritist Manifesto," a 14-minute monologue he first performed at Sundance this year (where Franco was also putting on an art installation) and again this weekend at the Lu Magnus Gallery in downtown Manhattan, is that James Franco is the one celebrity who "is good for us." I attended the event this weekend with about 7o other gallery-hoppers who were greeted by a floor full of Franco masks and a promise that the evening was going to be "weird." (I've been following with interest Nic Rad's "Celebritist Manifesto" for several weeks now, and have previously interviewed him about his James Franco installation. You can read the transcript here.)

But what does that mean that James Franco is good for us? Is it that Franco's myriad interests make us strive to become more capacious on our own? Or that he is interesting enough to be worthy of our attention? Or perhaps that because Franco is able to take something as lowbrow as a soap opera and turn it into a self-referential theoretical crash course on the nature of fame and art, so too the fandom  that is created around him is elevated to a higher cultural level discourse than, say, a 13-year-old girl's drawing of Robert Pattinson or our old "Buffy the Vampire Slayer" fan fiction? Is it that James Franco makes us feel smart about our celebrity crushes? James Franco is the Green Goblin.

James Franco is a wet tee-shirt model for Gucci

James Franco is a Director and a Producer

James Franco is a Novelist

James Franco is a performance artist

James Franco is a situationalist

James Franco is a self satirizing icon

James Franco is both overprivileged by his good genetic fortune, and also a humble a student of the universe

Nic is quick to say that his piece (also accompanied by three large canvases of "Franco art" and a multitude of "Being John Malkovich"-style masks of James Franco's face, to be worn by the audience) is a "fan poem," a term that brings to mind not gallery showings and Art Beat write-ups, but collages made by teen girls, scribbled in their notebooks after class. Yet we've seen from Laura Miller's adept deconstruction of "The Last Ringbearer" that the concept of "fan fiction" can no longer be ignored as only an exercise in celebrity obsession, or as the derivative form of creativity one gets from inserting their vision into a preexisting cultural phenomenon. There is "Wicked," which retold the story of "The Wizard of Oz" from the perspective of the Wicked Witch and, extending the metaphor, Warhol's prints of Marilyn Monroe. But neither is "fan art," in the way Nic describes the term, since both pieces seek to recontextualize their subjects and make the viewer experience them in a new way.

Fan art, as Nic describes it, is more an act of "unrequited group love" than it is of subversion or subjugation. "Celebritist Manifesto" isn't ironic or satiric in nature, which puts it on par, emotionally speaking, with those YouTube videos of girls lip-syncing to Justin Bieber, not "Rosencrantz and Guildenstern Are Dead." Ironically, it's closer to pop culture fandom than Franco's own attempt at cultural parody: That Sundance exhibition where he and several friends dubbed over the dialogue of "Three's Company," which mocked, not celebrated, the '70s sitcom. This project was an homage to Franco's artistic mentor Kalup Linzy, who became famous on YouTube for similar types of Dadaist soap opera reinterpretation. Of course, when you're dealing with "celebrity as fan" syndrome (as Franco is to Linzy), the result is a cultural Ouroboros where "General Hospital" ends up giving a cameo to a drag queen famous for her performance art satirizing soap operas. Kaufman-esque, indeed. Have we fallen too far down the rabbit hole yet? Too bad, now it's time to bring in Borges. In a conversation before the performance, Nic refers me to "Pierre Menard, Author of the Quixote,"  a short story that appears in "Ficciones." In the story, a French writer named Menard decides to throw literary criticism to the wind when translating Cervantes' famous tale; instead, he memorizes the entire book and rewrites it, word for word. Anybody who has taken a literary theory class has probably had this story used as an example of how the act of reproduction can change the "randomness" of a work. But seen from another angle, Nic argues, "Pierre Menard" is a story about fan fiction as well, and about contextualizing the culture that we live in now.

"I think we are increasingly a culture swaddled and completely insulated in our own sentiment. That’s by design, as in the design of marketing and advertising -- but also by mistake, as in the strong feelings that can sometimes develop for the random plot lines of the digital process that brings these stories into our lives," says Nic over e-mail. This e-mail comes approximately 30 minutes before James Franco signs up for Twitter.

It is also worth noting here that Nic looks remarkably like James Franco. As his love poem reaches its apex, the two entities -- fan and celebrity, artist and subject -- seem to meld into one being. Maybe that's the Borges talking, but there is a point during the show when an acquaintance taps me on the shoulder and asks, slightly worried, if we are actually watching James Franco perform as some guy named Nic Rad. It wouldn't be completely unheard of, considering James Franco's class on James Franco, right? An obsessive love poem about oneself from the point of view of a fictional fan would change the meaning of "Celebritist Manifesto," even if it was line-for-line the same. This is both the "Pierre Menard" theory, as well as just common sense. His success story is now new next America: how he cleverly avoided twenty seventh street and rose rank on his dashing good looks and public willingness to experiment with gender roles. James Franco whose name is easier to remember than Massimiliano Gioni, Josephine Meckseper, or Guthrie Lonergan.... James Franco who would name check Kalup Linzy's tossed salad animation style on one night and on the next night play opposite Julia Roberts in a romantic airport self help biopic. Here is your prom king deviant...only James Franco can simultaneously eat America's asshole and charm America's all American sweetheart who is also America's all American hooker...

Nic's epic love poem is as much about the world of art as it is about celebrity, and the nature of "fandom." It's also clear that he is far from being done with his thesis, even though he claims he won't be performing "Celebritist Manifesto" again unless James Franco asks him to. Nic's thesis involves a wide array of reference material: Lewis Hyde's "Trickster Makes This World"; McKenzie Wark's "Gamer Theory"; Chinese superstar/blogger/race car driver (and Franco equivalent) Han Han, and Tyler the Creator's recent appearance on Jimmy Fallon using our cultural cycle to revisit his core theme. Which, if you haven't figured it out yet, boils down to the subject of love. Nic Rad might be using James Franco as a subject for an exploration of an American movement, but this does not exempt him from being a fan, just like any other fan, as the last lines of "Celebritist Manifesto" achingly crystallize: