Liberalism and the post-union future 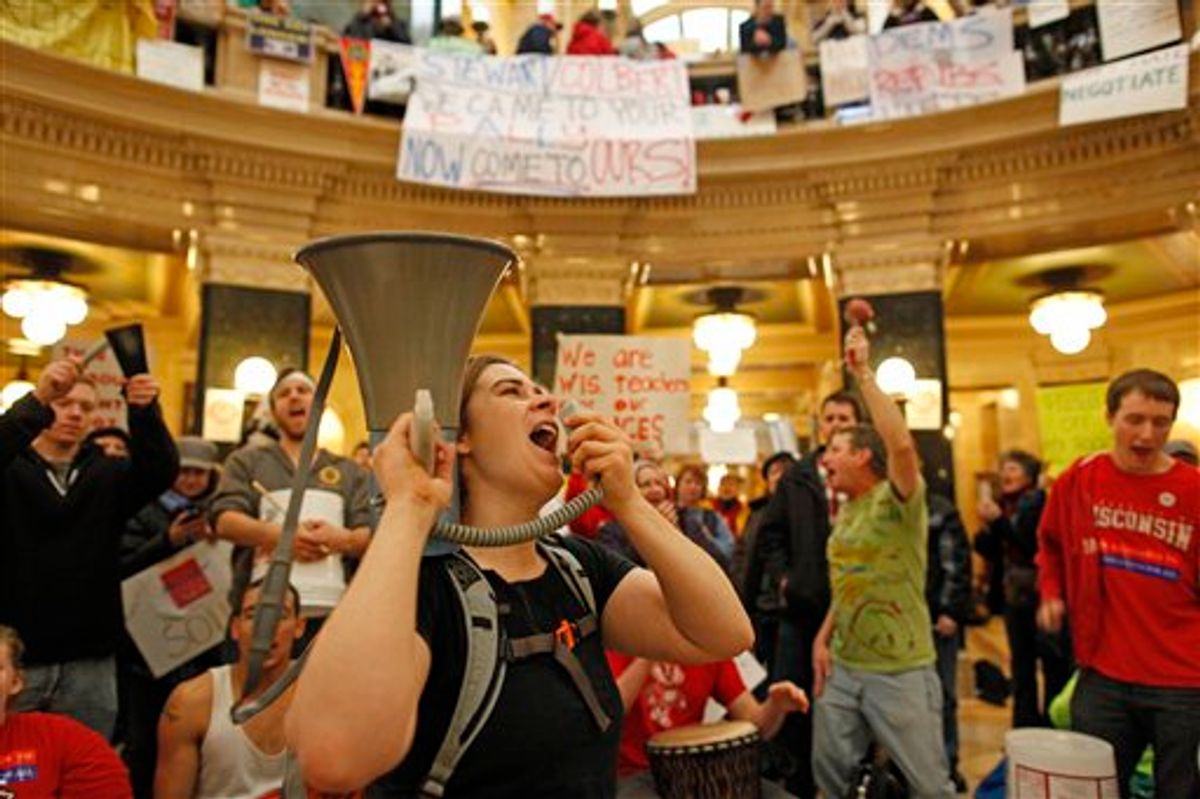 The struggle in Wisconsin over the future of collective bargaining by public employees is the most dramatic battle in a war being waged on many fronts over the future of public sector unionism. In other states and cities, the issue is whether states whose revenues have collapsed because of the recession should fund the promised pensions of public employees like police officers, emergency responders and schoolteachers.

In the divide-and-rule politics of the American right, public employees have for the moment replaced "welfare queens" and illegal immigrants as symbols of parasites who exploit working-class taxpayers. Never mind that the deregulation of finance and global trade imbalances caused the economic crisis and the subsequent cratering of revenues for state governments, not public sector unions. Never mind that it is illogical to assert that fairness requires not the upgrading of private sector worker rights and benefits until they are as decent as those of public sector employees, but the reduction of everyone’s rights and benefits to a miserable lowest common denominator. Resentment has its own logic, captured by a medieval Viking proverb: "One oak gains what is peeled from another." In times of crisis, populations often prefer scapegoats to explanations, and the right is ready to provide a scapegoat in the form of public sector unions.

The same phenomenon is occurring in most other industrial democracies. Only in Scandinavia is a majority of the private sector workforce still unionized. France’s level of 7-9 percent private sector union membership is nearly as low as that of the U.S. In Germany, union membership has dropped since 2000 from a quarter to a fifth of the workforce. In the developed world as a whole, only one in five workers are unionized.

Anti-union policies enacted by governments in the neoliberal era that began with Thatcher and Reagan are only part of the story. The transfer by companies of production to anti-union Southern states or developing countries like China and Mexico has eliminated many union jobs, while the expanding service sector is harder to organize than the mass production industries of the mid-20th century. The public sector has provided one of the few environments where workers can be successfully organized, sheltered from the threats of offshoring and (so far) from technological obsolescence.

In being unionized and having employer-provided defined benefit pensions, many American public employees are more like many private sector workers of the 1950s than like today’s non-unionized private sector workers, most of whom have neither an employer pension nor a stable, adequate 401K. Can public sector unions serve as a base, from which a substantial portion of the American workforce can once again be unionized? It is more likely that the right, having shattered private-sector unionism in America, will succeed in wiping out the remnants of unionism in the public sector as well. Even when the Democrats controlled both houses of Congress and the presidency after the elections of 2008, they were unwilling to try to pass the Employee Free Choice Act (EFCA), which would have made organizing unions slightly easier (if still difficult). And even if private sector unionism advanced, decades would be required before a substantial majority, much less a simple majority, of Americans belonged to unions.

The decline of trade unionism does not necessarily mean the decline of American liberalism. The union movement has been only one tradition in the American center-left. Others include technocratic progressivism, which puts its faith in paternalistic programs administered by nonpartisan civil servants and judges; the liberal variant of Jeffersonian and Jacksonian populism, which has championed small farms, small businesses and economic development of rural America; and social democracy, identified with universal social insurance programs like Social Security, Medicare and unemployment insurance. A fifth strain, democratic socialism, has always been marginal in America.

Of these traditions, liberal populism and social democracy have always been more popular with the American public than trade unionism and technocratic progressivism. Economic development programs like rural electrification in the 1930s, the interstate highway system and universal broadband today, typically championed by hinterland populists, appeal to American voters, as do programs to support small farms and small businesses. And despite the constant propaganda against "entitlements" by the elite media and pundits funded by the right-wing billionaire Pete Peterson, the American public embraces universal, contributory social insurance programs.

None of these popular liberal programs emerged from the union movement. Government support for economic development and small producers was championed in the 19th century by the modernizing boosters of the Midwest like Abraham Lincoln and in the 20th century by similar boosters of the agrarian South and West like Lyndon Johnson. In the early 20th century, universal social insurance tended to be opposed both by union activists, who preferred to bargain for benefits with employers, and by elite progressives, who preferred means-tested, paternalistic programs for the poor.

Unions have long struggled to establish their legitimacy in the eyes of the American people. The argument that unions represent monopolies of labor as dangerous as corporate and financial cartels has always resonated in Jacksonian America. The fact that unions in the U.S. have frequently been associated with immigrant workforces, corrupt urban political machines and in some cases the Mafia has not helped their popularity, either.

The chief contribution of unionism to American liberalism has not been in the realm of policy but in the realm of politics -- turning out the vote for progressive candidates and causes. The labor movement was critical at key moments in the passage of New Deal and Great Society legislation, as well as in the recent healthcare reform. Private sector union members tend to be more liberal in their voting behavior than their non-unionized counterparts in the private sector workforce.

Liberals must ask themselves whether defending archaic 1950s-style employment and benefit arrangements that survive as fossil relics in the public sector fits into a plausible and potentially popular vision of a reformed American social contract in the 21st century. The goal of liberal reform should be to phase out employer-based benefits entirely, in favor of universal, contributory social insurance programs. Deprived of employer benefits to offer their members, unions might still bargain with employers over workplace rules and wages. But from a liberal perspective, it would be better if workplace regulations were universal and imposed by legislation, rather than piecemeal and achieved by collective bargaining. And while the minimum wage should be raised until it is a living wage and indexed to inflation, it is not clear that liberals are obliged to support efforts by workers in particular industries or particular professions to obtain above-market wages, possibly at the expense of innovation or consumers.

In the long run, conservatives who succeed in destroying public sector unions might inadvertently help American liberalism. To begin with, the right would deprive itself of an enemy. And the divide-and-rule tactics of the right might be less likely to succeed if all American workers -- private and public -- were in the same situation with respect to benefits and workplace rights. But in order to take advantage of a post-union America, liberals would have to create a popular political movement capable of replacing the lost legions of organized labor at the polls. In other words, American liberals would have to organize.