Could this man save the Democrats' Senate majority? 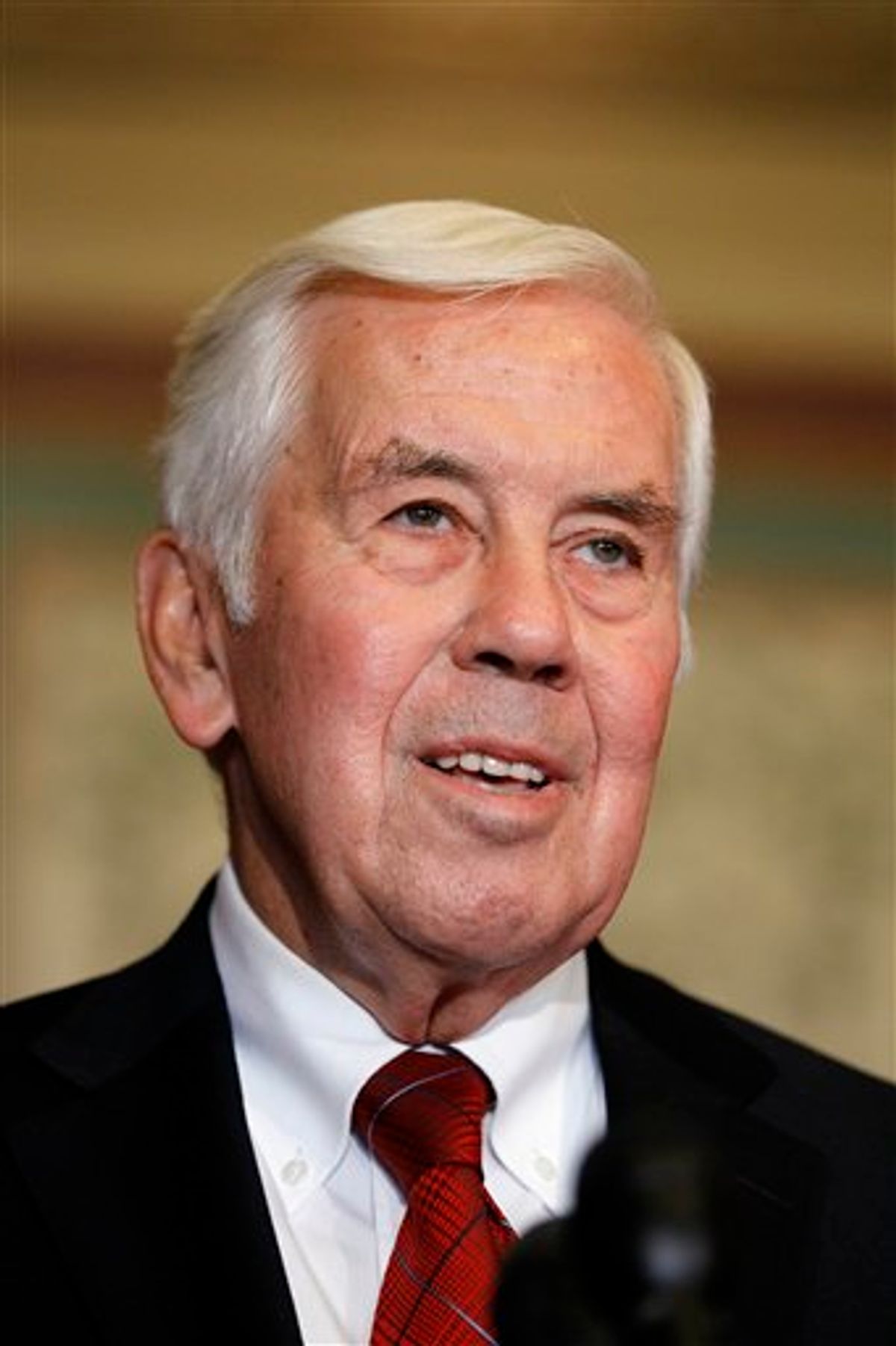 FILE - In this Oct. 12, 2010, file photo, Chairman of the Senate Foreign Relations Committee Ranking Member, Sen. Richard Lugar, R-Ind., talks on Capitol Hill in Washington. What does a longtime Republican senator with a national reputation for working well with Democrats do in the face of a potentially career-ending tea party challenge? If youre Lugar, you tell them to get real. (AP Photo/Alex Brandon, File) (AP)
--

It's been clear since last November, when Republicans posted a six-seat gain in the upper chamber, that the Democrats' Senate majority would be in grave danger in 2012, simply because the party will be defending 23 of the 33 seats that will be up. And that was before the news that North Dakota's Kent Conrad, Virginia's Jim Webb and New Mexico's Jeff Bingaman would all be stepping down, developments that have all further complicated the party's '12 math. (It's also not even mentioning the awful poll numbers that Ben Nelson continues to face in red state Nebraska, where it's looking more and more like he'll be the Blanche Lincoln of '12.)

Against this backdrop, the latest developments in Indiana, where Tea Party activists are aggressively targeting Republican Senator Richard Lugar, would seem to offer an invaluable and unexpected opportunity to Democrats.

Later today, Richard Mourdock, the state's Republican treasurer, is set to formally announce his challenge to Lugar in the '12 primary. And he will apparently enter the race with the support of a majority of the state's GOP county chairmen and members of the state party's executive committee. It's no secret that conservatives in Indiana have been planning to take on Lugar in '12; what's startling is that speed at which Mourdock has been able to corral so much support. This has the feel of an "emperor has no clothes" moment for Lugar -- something that will encourage other party leaders, activists and voters not to be intimidated by his 35 years in the Senate and by the immense respect he enjoys in Washington. In other words, it's not hard to see this getting worse -- a lot worse -- for Lugar between now and May '12.

The opportunity for Democrats is obvious, and it's apparently already being talked about in Indiana: Convince Lugar to switch parties and run for reelection on the Democratic line next year.

True, Lugar is still generally a reliable Republican vote in the Senate, despite the Tea Party's anger with him. He broke with the GOP on the Dream Act and on the new Start Treaty last December, but he was just as opposed to the stimulus and to healthcare reform as any Republican. Of course, the simple fact that the GOP base is turning on him so aggressively probably makes Lugar more popular with Democrats. And when he last ran for reelection (in the very anti-Republican year of 2006), Indiana Democrats didn't even challenge him, with the state Democratic chairman explaining that "Richard Lugar is beloved not only by Republicans, but by independents and Democrats."

It's an open question, of course, whether Lugar would be receptive to the idea of switching. Maybe he's convinced that he'll survive the GOP primary despite the ominous signs; or maybe he's content to let the primary electorate of the party he's belonged to for his whole life decide his fate next year, even if it means forced retirement. One of the chief knocks on Arlen Specter when he switched parties in 2009 was how desperate and calculating he looked; maybe Lugar wants to avoid this.

And it's an open question whether Democratic leaders, in Washington and Indiana, will actually pursue him -- and whether Democratic voters would play along if they did. Specter, after all, flipped parties only with assurances from the White House and top Pennsylvania Democrats that they'd stand with him and chase away potential Democratic primary challengers. But that didn't stop Rep. Joe Sestak from entering the race and knocking off Specter in the May 2010 primary.

You could make a case that Lugar wouldn't be as vulnerable in a primary as Specter, given that Specter's combative personality and periodic grandstanding for the right (remember Anita Hill?) had made him many Democratic enemies over the years. It might be easier for Indiana Democrats to forgive and forget Lugar's Republican past, simply because his personal style is so much more agreeable. Still, Sestak's primary success showed the clear limits of the power of the Democratic "establishment" to dictate primary outcomes.

If Mourdock continues to make waves on the GOP side, Democrats will soon have to make a simple calculation: Do they have a candidate in their ranks who could realistically defeat Mourdock -- who won the treasurer's race last year with 62 percent of the vote -- in November 2012? If the answer is "yes," then they should sit back and enjoy the GOP primary fight, hoping it gets ugly and divisive enough to boost their own general election candidate. But if the answer is "no," then they should reach out to Lugar now.

A pick-up of a Senate seat in Indiana next year could potentially keep Democrats at or above 50 seats. The prospect of this hasn't been on anyone's radar, though -- until now.