One in 4 U.S. counties are dying says Census 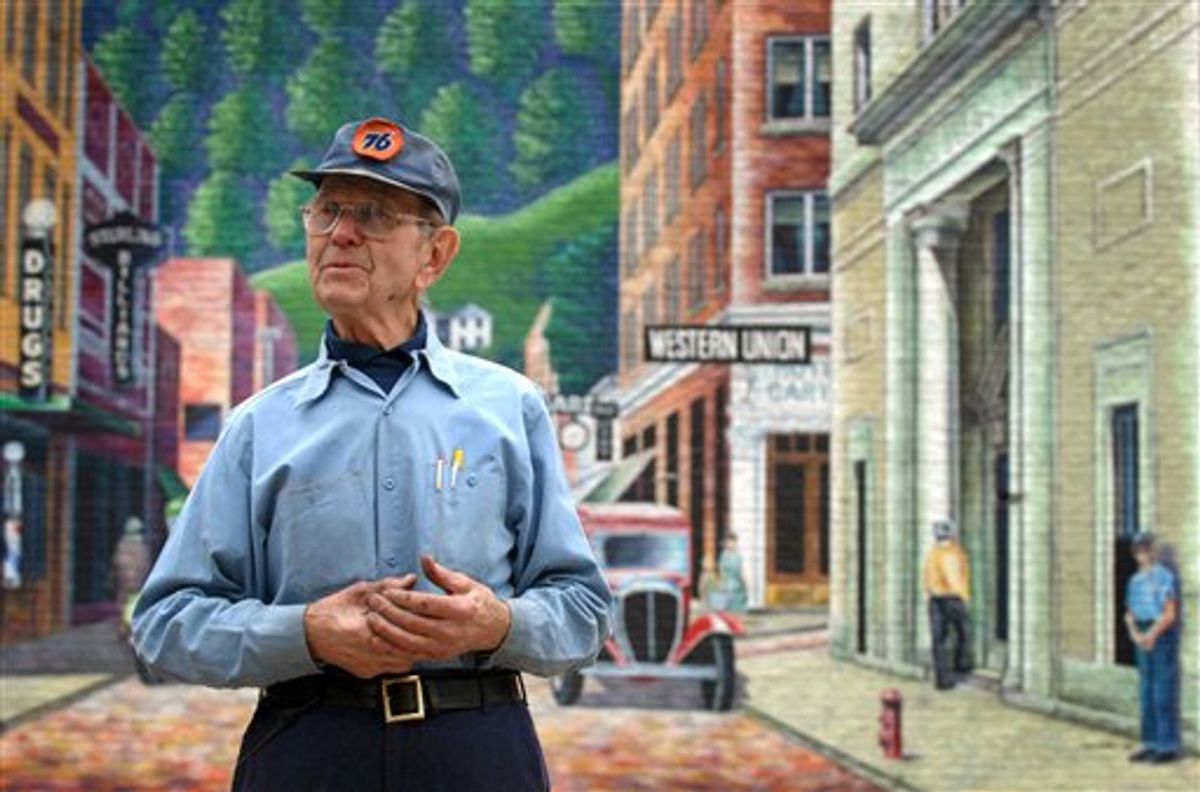 Ed Shepard, 87, who runs a full service gas station in Welch, W.Va., is seen in the Feb. 9, 2011, photo. His gas station is the last of the dozen full service stations that used to service the town of Welch. According to the 2010 census, Welch also experienced more deaths than births. Shepard laments a prosperous era gone by when shoppers lined the streets and government lent a helping hand. Now, here as in one-fourth of all U.S. counties, West Virginia's graying residents are slowly dying off. (AP Photo/Jon C. Hancock) (AP)
--

Nestled within America's once-thriving coal country, 87-year-old Ed Shepard laments a prosperous era gone by, when shoppers lined the streets and government lent a helping hand. Now, here as in one-fourth of all U.S. counties, West Virginia's graying residents are slowly dying off.

Hit by an aging population and a poor economy, a near-record number of U.S. counties are experiencing more deaths than births in their communities, a phenomenon demographers call "natural decrease."

Years in the making, the problem is spreading amid a prolonged job slump and a push by Republicans in Congress to downsize government and federal spending.

Local businesses in Welch began to shutter after U.S. Steel departed McDowell County, which sits near Interstate 77, once referred to as the "Hillbilly Highway" because it promised a way to jobs in the South. Young adults who manage to attend college -- the high-school dropout rate is 28 percent, compared with about 8 percent nationwide -- can't wait to leave. For some reason, the fish in nearby Elkhorn Creek left too.

"There's no reason for you to come to Welch," says Shepard, wearing a Union 76 cap at a makeshift auto shop he still runs after six decades. "This is nothing but a damn ghost town in a welfare county."

In all, roughly 760 of the nation's 3,142 counties are fading away, stretching from industrial areas near Pittsburgh and Cleveland to the vineyards outside San Francisco to the rural areas of east Texas and the Great Plains. Once-booming housing areas, such as retirement communities in Florida, have not been immune.

West Virginia was the first to experience natural decrease statewide over the last decade, with Maine, Pennsylvania and Vermont close to following suit, according to the latest census figures. As a nation, the U.S. population grew by just 9.7 percent since 2000, the lowest decennial rate since the Great Depression.

"Natural decrease is an important but not widely appreciated demographic phenomenon that is reshaping our communities in both rural and urban cores of large metro areas," said Kenneth Johnson, a sociology professor and demographer at the University of New Hampshire's Carsey Institute who analyzed the census numbers.

Johnson said common threads among the dying counties are older whites who are no longer having children, and an exodus of young adults who find little promise in the region and seek jobs elsewhere. The places also have fewer Hispanic immigrants, who on average are younger and tend to have more children than other groups.

"The downturn in the U.S. economy is only exacerbating the problem," said Johnson, whose research paper is being published next month in the journal Rural Sociology. "In some cases, the only thing that can pull an area out is an influx of young Hispanic immigrants or new economic development."

The predicament is starkest in places like Welch. In the 1960s, McDowell County ranked tops in the U.S. in coal production. Even as it began to stumble, President John F. Kennedy took notice and pushed federal aid to the region. McDowell residents were the first to get federal food stamps when they were rolled out in the Kennedy administration.

After U.S. Steel sold the last of its mining operations by 2003, folks in southern West Virginia began counting on new highway projects to prop up the long-struggling area.

"One of the promises we're waiting to come is the highway," said Carolyn Falin, an assistant schools superintendent in McDowell County.

From the east, the Coalfields Expressway would bypass the many two-lane, truck-clogged roads zigzagging through the mountainous region. It would link a freeway to the Virginia state line 65 miles to the southwest. So far, only a few miles are open. Design work on most of it hasn't been finished.

From the west, a 95-mile King Coal Highway is also envisioned, with some bridge work and a few miles now under construction.

Shepard, who walks to work from a nearby apartment, watched the county's population plummet 80 percent after U.S. Steel's exit. Even with the recent opening of a federal prison, Shepard bemoans the area's decline, including the end of "20 years of the best fishing you ever saw."

Nowadays, he says, "you can fish but you won't catch any trout. It's like the coal mines. It's all gone."

Recently the U.S. Senate rejected a $900,000 appropriation for a proposed interchange of the King Coal Highway and the Coalfields Expressway near Welch.

Dying counties in the U.S. were rare until the 1960s, when the baby boom ended. By 1973, as farming communities declined, roughly 515 counties -- mostly in the Great Plains -- reported natural decrease. The phenomenon then began to show up in industrial regions, such as upstate New York and California. Natural decrease peaked in 2002 at a record 985, or 1 in 3 counties, before increasing births and an influx of Hispanic immigration helped add to county populations during the housing boom.

Following the recent recession, birth rates have dropped to the lowest in a century. Preliminary census numbers for 2007-09 now show that the number of dying counties is back on the upswing. Recent additions include Pittsburgh and its surrounding counties.

James Follain, senior fellow and economist at the Nelson A. Rockefeller Institute of Government at the University of Albany, said a new kind of declining city may be emerging in the wake of the housing bust -- metropolitan areas that rapidly overbuilt earlier in the decade and then suffered massive foreclosures.

He cited as examples Las Vegas, Miami, parts of Arizona, and Stockton, Modesto, Fresno and Riverside in California. Like traditional ghost towns, Follain says, portions of these areas could spiral down from persistent loss of jobs and population and lose their reason for being.

Follain also pointed to a tighter fiscal environment in Washington that will limit help to troubled areas. The Obama administration announced this month it would shrink the government's role in the mortgage system to reduce taxpayer exposure to risk. House Republicans also are pushing federal spending cuts of more than $61 billion, even if it means reducing jobs.

"It's going to be a very slow recovery," Follain said.

Not all U.S. areas are declining. Most places with the fastest growth since 2000 were able to retain or attract college graduates and young professionals who came for jobs and later started families. Metro areas with diversified economies such as Austin, Texas, Raleigh, N.C., and Portland, Ore., all saw gains in college graduates; other places seeing gains or reduced losses in young adults, such as Washington, D.C., Boston and San Francisco, have burgeoning biotech industries.

In West Virginia, more than 40 of its 55 counties had natural decrease over the past decade. Yet the state still gained population overall, and averted a loss of a U.S. House of Representatives seat based on the 2010 census.

It wasn't because of a last-minute turnaround. Most of West Virginia's population gains are new residents spilling over into the eastern part of the state from the blossoming Washington-Baltimore metropolitan area. The three counties on the Maryland line -- Morgan, Berkeley and Jefferson -- each had substantial increases.

It's a different story in West Virginia's northern panhandle, along the edge of Pennsylvania near Pittsburgh.

On a recent afternoon, a group of students mingled during a cigarette break at West Virginia Northern Community College in Wheeling and chatted about their futures. "It's not that bad an area," said Demetrius Paige, 19, but there are "not a lot of jobs." He plans to leave within six years.

Kayla Murphy, 19, of Moundsville wants to stay in the state and become a nurse to help children like her brother, who has celiac disease and diabetes. She says moving out is the only real option for career-oriented people. They include her boyfriend, who left for Wisconsin to teach history.

"You have to," Murphy said. "Working at McDonald's isn't cool."