"V" is slick, serious fun, but lacks the ambition and intensity of great science fiction 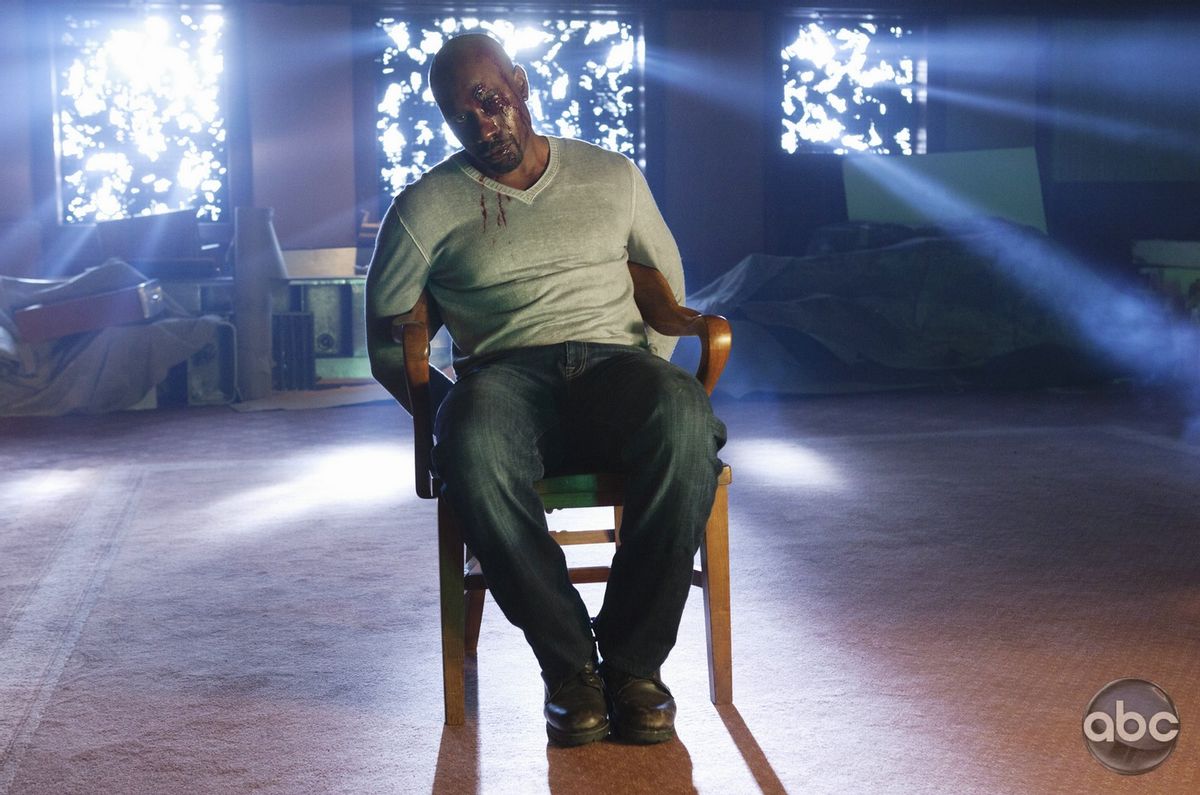 If you love genre TV, there's nothing more frustrating than finding a series that has everything it needs to be great, but somehow never gets there; a series that delivers a solid B+ episode week after week, and rarely missteps egregiously enough to make you want to bail out, but that neverthless remains tantalizing underdeveloped.

That's "V" (Tuesdays, 9 PM/8 central), ABC's big-budget remake of the same-named, strictly-from-hunger NBC show about humans battling an invasion by creatures that look just like us but are actually evil lizards. Developed by Scott Peters from the original miniseries-cum-series by Kenneth Johnson, the ABC version wants to be a serious sci-fi fan's reclamation of beloved childhood trash -- a remake/improvement along the lines of SyFy's meandering, fitfully brilliant "Battlestar Galactica," which turned a mostly braindead late-'70s ripoff of "Star Wars" into a meditation on war, terrorism, faith, cultural relativism, and whether so-called "human" qualities are unique to humankind. ABC's "V" flirts with those sorts of big questions -- notably in the scenes where the Visitors' leader, Anna (Morena Baccarin) devises new occupation tactics based on her understanding of human psychology. Unfortunately, the series never quite succumbs to the allure of pulp philosophizing -- perhaps because it rightly fears that doing so would alienate casual viewers who just want escapism.  It skates along the surface of its premise, executing the occasional figure-8 or backwards jump, but never cracking the ice to see what marvels might lurk beneath.

The series' best idea is that the alien invasion couldn't just start from nothing, with giant motherships filling the skies over the world's capitals, but would need to be prepared for long in advance, with sleeper cells of undercover Visitors infiltrating every layer of human society  -- a risky strategy given the certainty that some of those sleeper agents might get used to their new surroundings and begin empathizing with the humans they were supposed to be undermining and oppressing. The show's most fascinating character is Ryan Nichols (Morris Chestnutt), a Visitor who rejected his own culture, became a fifth columnist, then reluctantly rejoined the Visitors in season two following the birth of his half-Visitor, half-human daughter. Where the original "V" miniseries treated the birth of a hybrid child as occasion for "Chosen One" cliches (and a too-easy way to provide closure), on the new "V" it seems an extension of the occupier/occupied dynamic.

But this is another instance where the show seems content to be merely promising, rather than truly accomplished. Anna's plan to mass-impregnate human women with Visitor seed is the show's pulpiest, most disreputably drive-in trashy plot twist yet, but it has Earth history precedent. Many failing occupations have decided to breed the enemy into submission, without realizing it only makes the relationship between occupier and occupied more tangled and emotionally fraught, and essentially creates a new, blended, third culture where there were two separate ones before. I loved the "red rain" that fell like a storm of blood all over the planet at the start of this season, raising humanity's fertility levels. But here, as elsewhere, the show seems to be thinking mainly in terms of spectacle and plot, not characterization -- and the difference between good TV and great TV lies in the ability to think about plot in terms of psychology. In other words, great series aren't mainly about what happens; they're about the effect the events have on the characters.

Remember, Anna personally handed Ryan his hybrid baby (after murdering Ryan's wife on the operating table via lethal injection), and she oversaw this milestone in Visitor-human relations while counting down to her (literally) aborted plan to send her soldier offspring to wipe out the resistance -- all of which means that procreation must have been very much on Anna's mind when she succumbed to human grief, acted impulsively, called down the Red Rain, and set that mass rape plan into motion. But where a great series would frame everything that came afterward in terms of what it means to Ryan and Anna as Visitors and parents (or wannabe-parents), "V" seems interested in the developments mainly as spurs for more cat-and-mouse stuff -- which would be fine if the show didn't carry itself as if it was interested in so much more than that. I would love to know more about Anna's psychology. She has positioned herself as an almost Vulcan-like avatar of detachment as well as a cult leader/goddess doling out bursts of synthetic emotion ("Bliss") like psychic heroin. Yet with each passing week she seems to be acting more from unchained emotion while strenuously denying that's what she's doing. The show seems to be content to let her be a glorified ice goddess villain (and to contrast her with her hot-blooded mother Diana -- Jane Badler's same-named not-quite-reprise of her memorably soapy villainess on the original "V"). But my disappointment that "V" won't go there is somewhat mitigated by my sense that it probably can't -- because it's on an all-things-to-all people broadcast network, not the niche-oriented SyFy, and because its producers and writers aren't really interested in delving too deeply into psychology because they're scared of losing the action movie audience (which, ratings-wise, doesn't seem to tuning in anyway).

"V" is character-driven only in the sense that the characters have a certain internal consistency and are played by mostly terrific actors (Mitchell and Chestnutt are standouts). Beyond that, you rarely get the sense that the writers are thinking about the characters from the inside-out, which is what made the SyFy "Battlestar Galactica" gripping even when it got lost in its philosophical/political/religious constructs and forgot to move the story along. (Another problem: like the inferior "BSG" prequel "Caprica," "V" is mostly humorless.)

The heart of "V" is the war of wills between Anna's inner circle and the rebels led by FBI agent-turned-resistance fighter Erica (Elizabeth Mitchell). The show's understanding that during occupations, public reactions develop along predictable lines (resistance breeding crackdowns breeding more resistance) is sophisticated for commercial TV, with infrequent (maybe intentional) echoes of "The Wretched of the Earth" and "The Battle of Algiers." Throughout season one, I kept hoping the series would focus more provocatively on the dynamic of invaders/occupiers vs. rebels/terrorists -- not just because it plugs directly into America's ongoing foreign policy misadventures, but because it's a rich source of adult drama.

The closest "V" got to any of this was in the season one finale, a plot-packed, mostly thrilling hour that nevertheless failed to rise above conventional good guys-vs.-bad guys stuff. The centerpiece found Erica accepting a dinner invitation from Anna so she could board the New York mothership and destroy a chamber full of soldier eggs that were due to hatch soon and unleash ferocious soldiers that would exterminate the human resistance. The half-baked logistics of Erica's plan highlighted another failure of the show, its inability to conceive an alien civilization except as a slightly modified version of whatever we have on Earth right this minute. (The dinner itself looked like a reception that you could find in the ballrooms of half the chain hotels in America on any given night, and when Erica excused herself to go wandering off in search of the egg chamber, the lack of security was glaring. Shopping malls have tighter access restrictions than this alien mothership.) But the climax -- a fifth columnist begging Erica to shoot him, to create a scapegoat for the attack and prevent her from being exposed as a resistance fighter -- was inspired. And Anna's counter-move (effectively covering up the cover-up) and her personal reaction to the egg chamber attack (a hideous, full-throated scream that belied her supposedly emotionless exterior) were even more promising.

Ah, but there's that damned word again: "Promising." You can't just keep promising and promising and promising without delivering. "V" hasn't figured this out. Too much of it feels like a grade-B melodrama about secret agents or undercover cops fighting a drug cartel. There are too many dimly lit meetings in warehouses and over-edited karate fights in kitchens and soap opera revelations that are meant to enrich the main characters but that usually feel off-point. (One exception is the revelation that Erica's ex was not really the father of her son, Tyler; that seemed out-of-nowhere last season, but they've taken it somewhere this year, turning it into yet another example of the Visitors' planting seeds -- pun intended -- that were meant to flower later.)

The series is is more science fiction-flavored fantasy-adventure than true science fiction. That would be fine if this were 1984, when NBC spun its wildly successful, modestly entertaining "V" miniseries into a stupid, shoddy weekly series that had the Visitors chasing humans around the streets of Los Angeles in Jeeps. But this is not the mid-'80s anymore. And if TV is still, for the most part, a vast wasteland, at least it's got more oases than ever before -- and a good number of them are paradise for science fiction fans. In the last 25 years, viewers have seen "The X-Files," "Battlestar Galactica" and "Lost," to name but a few popular, influential shows that were interested in bigger questions than "How will our heroes get out of this jam?"

"V" isn't on that level, and I doubt it ever will be. The show doesn't lack for visual and thematic darkness, and it has staged some unnerving images of horror and suffering, such as the scene in the Jonathan Frakes-directed episode "John May" where the captured fifth columnist Georgie (David Richmond-Peck) was tortured by having a tiny mechanical insect inserted beneath his skin. (It entered through his tear duct, and while Georgie writhed and screamed in torment, he seemed to be weeping a single tear of blood.) But for the most part "V" feels like a slightly full-of-itself riff on tropes that have been done elsewhere with more intelligence and panache. I appreciate this ABC series' compact storytelling and committed performances. And I cherish its occasional stylistic flourishes, such as that chill-inducing moment in season one where Anna kneels naked in a beam of light and spreads the emotion-substitute "Bliss" throughout Visitor society, the TV screen shimmering while Sigur Ros' "Svefn-g-englar" plays on the soundtrack. But I don't think this is one of those shows that's going to be saved from cancellation by fan enthusiasm, or remembered as a magnificent, underappreciated program that never got the network support or critical attention it deserved. It's not great, it's just good -- and in modern TV, science-fiction is a genre where good isn't good enough.