Scott Walker warns he could start cutting up to 1,500 jobs if his controversial bill doesn't pass by next week 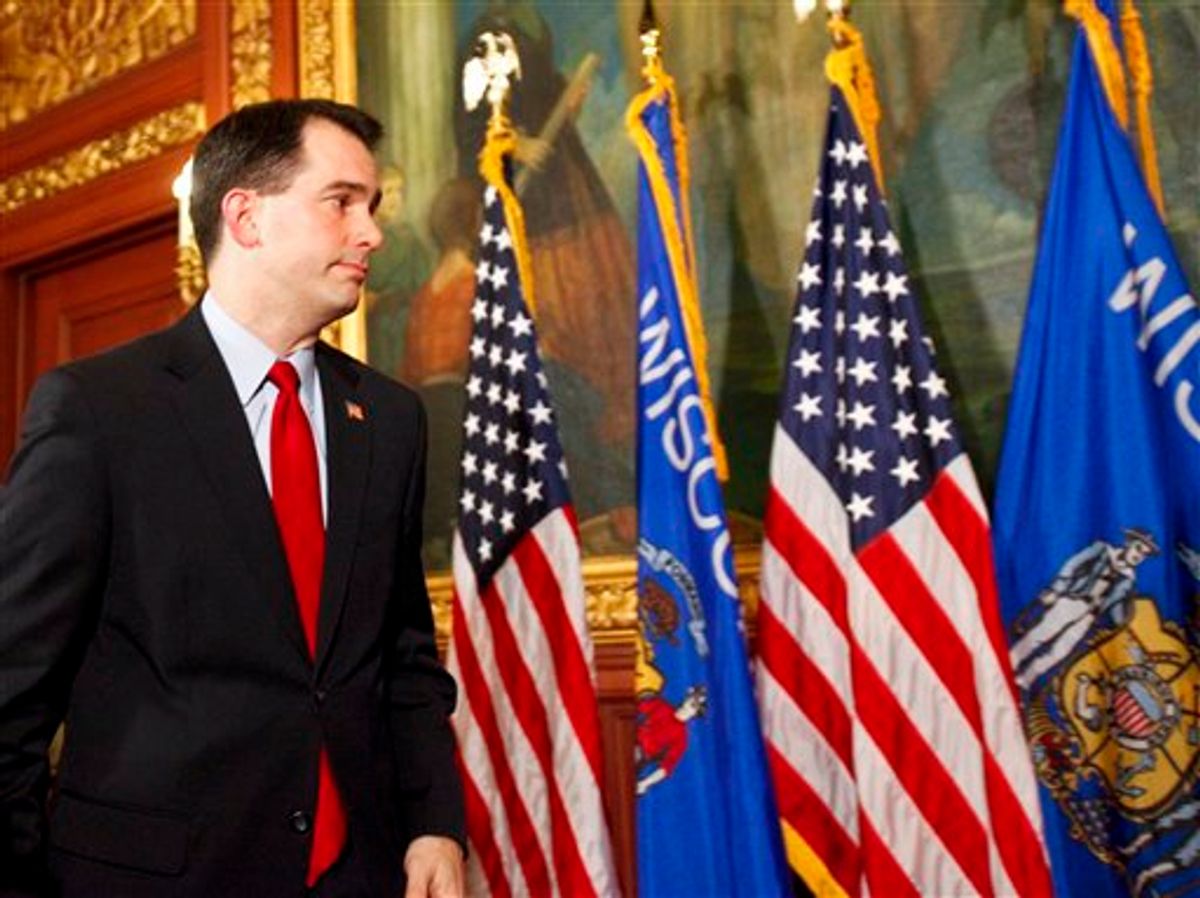 Wisconsin Gov. Scott Walker walks away after talking to the media at the state Capitol in Madison, Wis., Monday, Feb. 21, 2011. Opponents to the governor's bill to eliminate collective bargaining rights for many state workers are in the 7th day of protests at the Capitol. (AP Photo/Andy Manis) (AP)
--

Walker said in a statement to The Associated Press that the layoffs wouldn't take effect immediately. He didn't say which workers would be targeted but he has repeatedly warned that up to 1,500 workers could lose their jobs by July if his proposal isn't passed.

"Hopefully we don't get to that point," Walker said.

It could take weeks or even months to lay off workers under the terms of their current union contracts.

Meanwhile, Wisconsin Assembly Speaker Jeff Fitzgerald announced Tuesday the Republican-led chamber would pass its version of a bill cutting collective bargaining rights for most public employees. Fitzgerald said Republicans were elected to lead the Assembly in November to make deep cuts to state spending, and they will deliver on that pledge.

"When you talk about a compromise, no. We're going to make a reform," Fitzgerald said.

Senate Democrats walked out last week rather than vote on Walker's bill that would force public workers to pay more for their benefits. He also wants to eliminate collective bargaining for nearly all workers except concerning salary increases that aren't greater than the Consumer Price Index.

The proposal, designed to help Wisconsin plug a projected $3.6 billion budget hole, has led to eight straight days of massive protests that grew as large as 68,000 people on Saturday.

Security was tight in the Capitol on Tuesday morning as both the Senate and Assembly were in session. Democrats in the Assembly planned to push for adoption of more than 100 amendments.

The Senate continued to be stymied in its ability to vote on the bill after the 14 Democrats walked out on Thursday, making it impossible for the remaining Republicans to take up the measure. The Democrats stayed away again on Tuesday, while the 19 Republicans continued on with other business, including passing a resolution commending the Green Bay Packers on winning the Super Bowl and extending a tax break to dairy farmers.

The Senate met under the watchful eye of state patrol troopers, but only about 15 members of the public, in the galleries. The roar of protesters chanting and beating on drums just outside the Senate chamber in the Capitol Rotunda could be heard as Republicans conducted its business.

Walker and Republican leaders have repeatedly called on the Democrats, who escaped to Illinois, to return and get back to work.

Democrats have said they won't come back until Walker is willing to negotiate.

Public employees have said they would agree to concessions Walker wants that would amount to an 8 percent pay cut on average, but they want to retain their collective bargaining rights. One Republican senator also has floated an alternative that would make the elimination of those rights temporary.

Walker has repeatedly rejected both offers, saying local governments and school districts can't be hamstrung by the often lengthy collective bargaining process. He says they need to have more flexibility to deal with up to $1 billion in cuts he will propose in his budget next week and into the future.

It's a high-stakes game of political chicken that has riveted the nation and led to ongoing public protests. Neither Republicans nor Democrats are budging: Walker says he won't negotiate, and the 14 missing Senate Democrats say they won't return until he does.

"We'd love to come back today," said Democratic Sen. Jon Erpenbach, one of the 14 who went to Illinois. "We could be up there this afternoon and pass this if he would agree to removing the language that has absolutely nothing to do with balancing the budget."

Republicans planned to forge ahead with other business Tuesday, including a resolution honoring the Green Bay Packers for winning the Super Bowl and a bill extending tax breaks to dairy farmers. Those bills have bipartisan support, but Senate Majority Leader Scott Fitzgerald -- Jeff Fitzgerald's brother -- has tried to put pressure on Democrats by threatening to take up more controversial matters, such as a GOP-backed proposal requiring voters to show photo identification at the polls.

"You have shut down the people's government, and that is not acceptable," Fitzgerald said to Democrats during a brief meeting Monday setting the Senate's agenda for Tuesday. Two Democratic senators participated in the meeting by phone.

Democrats counter that Walker could compromise and put an end to the stalemate.

"It's right in front of the governor," Miller said. "He just needs to pick it up and allow us to move on. ... This is a no-brainer."

As Walker spoke under heavy guard at a late Monday afternoon news conference inside his conference room, thousands of protesters could be heard through the doors blowing whistles, banging on drums and chanting "Scott Walker has got to go!"

"This guy is power drunk and we're here to sober him up," said Bert Zipperer, 54, a counselor at a Madison middle school who was among the protesters. "He wants to do it unilaterally without any compromise. He wants to be a national conservative hero and he thinks he can get away with this."

Walker's plan would allow unions representing most public employees to negotiate only for wage increases, not benefits or working conditions. Any wage increase above the Consumer Price Index would have to be approved in a referendum. Unions would face a vote of membership every year to stay formed, and workers could opt out of paying dues.

The emergency plan is meant to address this year's $137 million shortfall and start dealing with the $3.6 billion hole expected by mid-2013. The benefits concessions would amount to $30 million this year, but the largest savings Walker proposed comes from refinancing debt to save $165 million.

That portion must be done by Friday for bonds to be refinanced in time to realize the savings by June 30, the end of this fiscal year.

Walker said not passing the bill by Friday would make even deeper cuts necessary and possibly result in laying off 1,500 workers over the next four months.