Arcade Fire and fans go on the offensive post-Grammy win

Are you still angry about album of the year going to some hipster no-name band? Time to get over it 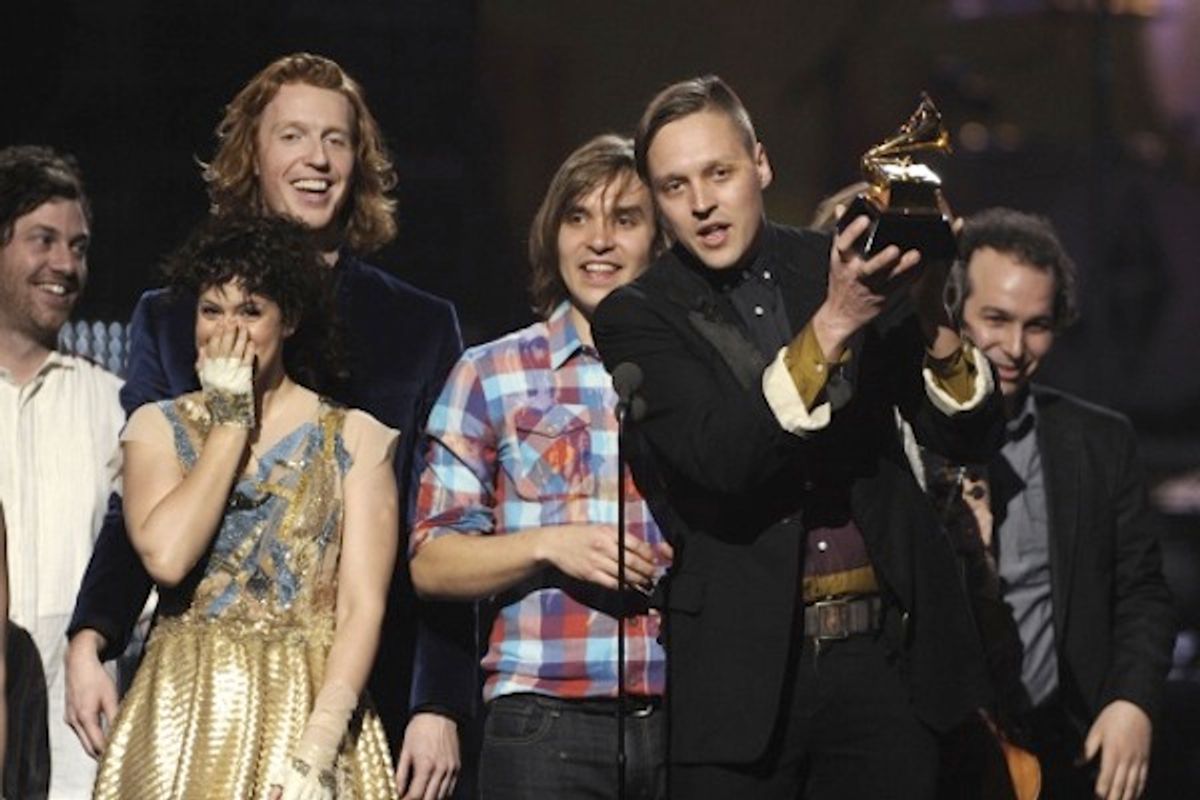 Hey, remember last week, when everyone was really upset that this band no one has ever heard of won the Grammy for album of the year? Everyone was like "Who/what is an Arcade Fire and what do they have to do with the 'Suburbs'?" There was even a whole website dedicated to people not knowing who Arcade Fire was. It's like these people never listened to the trailer for "Where the Wild Things Are."

In one of the most vocal criticisms of the band's win, record executive Steve Toute took out a full-page ad in the New York Times, completely blasting the NARAS and the Grammys for losing "touch with contemporary popular culture" and also fixing the awards. His evidence? Because after their win, Arcade Fire played two songs, one right after each other, and were completely prepared!

As the show was coming to a close and just prior to presenting the award for Album of the Year, Arcade Fire performed 'Month of May' only to, surprise, win the category and, in a moment of sheer coincidence, happened to be prepared to perform 'Ready to Start.' Does the Grammys intentionally use artists for their celebrity, popularity and cultural appeal when they already know the winners and then program a show against this expectation?

Complete conspiracy. Or else, you know, these guys tour a lot and are used to impromptu performances. (Steve is also mad Justin Bieber didn’t win, by the way.)

While Steve's shot is directed more toward the Grammys than with Arcade Fire itself, we have to wonder if NARAS is really "losing touch with contemporary pop culture." Millions of hipsters disagree with you there, Steve. Like the guys in Funemployed, the comedy group behind the "Arcade Fire Hipster Attack" video. These dudes are ready to pound the daylights out of anyone trying to besmirch their favorite soundscape artists.

Arcade Fire deserved the win this year. They made the best album. If the award was names "Album Sales Of The Year" award, there would be no discussion. Stoutes letter was nice piece of self publicity. Did he see Kanye's tweets when we won and the praise he gave us?? He needs to tune in. Eminem made a big selling album but it was far from being his best work. Katy Perry made a big pop record that simply didn't have weight or credibility. Gaga's repackage, great album but it was a repackage of the main release. I think everyone felt it was going to be Lady Antebellum's moment having won 5 out of 6 awards to that point. We all felt that way too.

I'm proud of this band and what they have achieved. We didn't lobby any organisation for this nor did the band play the game. We paid our own overhead to do the event, thus the lack of on stage gimmicks. No label picked up the tab.

Arcade Fire are now one of the biggest live acts in the world. It's not all about record sales. It's about making great records and it's about building a loyal fan base. Ther band make great albums, they're not a radio driven singles band. On top of that, they own their own masters and copyrights and are in complete control of their own destiny. Things couldn't be better.

Excuse any typos as I'm on my blackberry

(Sorry, that part about his BlackBerry is my favorite. You'd hope your manager actually sat down and typed things out before sending a public defense of your existence, but oh well.)

Thanks to the controversy, no one can say anymore that they've never heard of the Arcade Fire. All that’s left to debate is whether one of the "biggest live acts in the world" can still keep its indie cred.