Why is Beyonce untouchable?

The pop giant darkens her face and causes a stir. But what about taking blood money from Libya's ruling family? 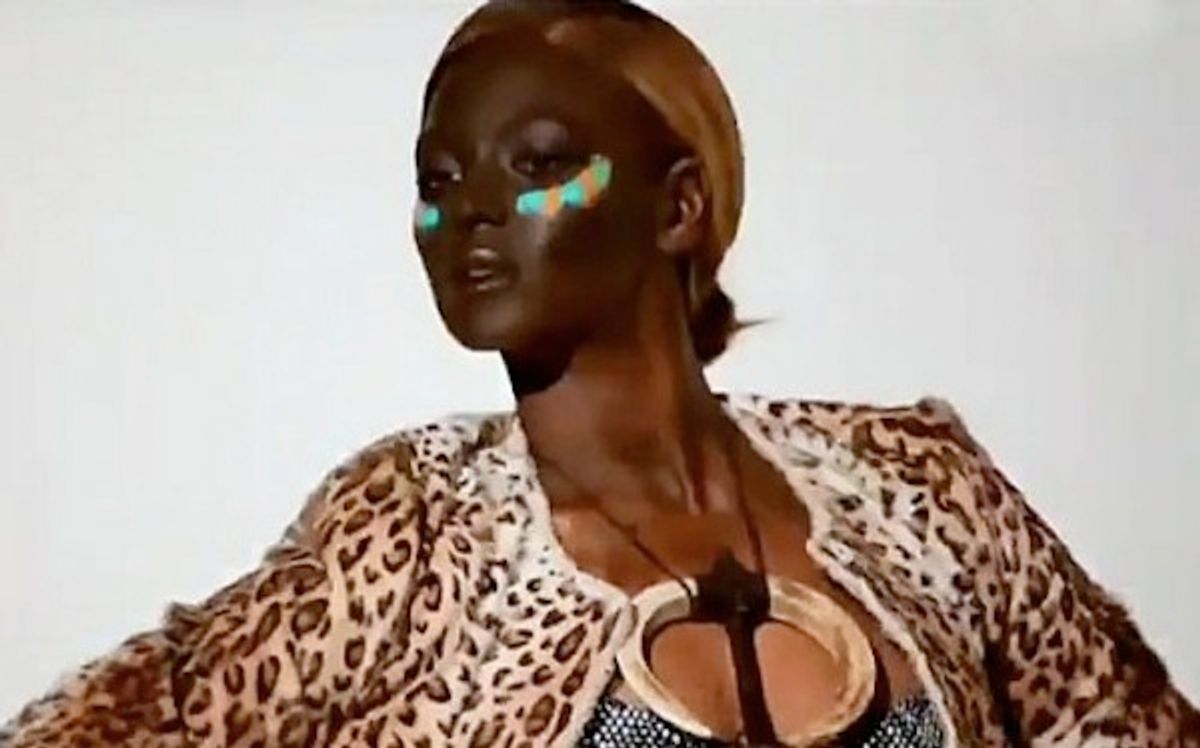 Beyonce with her face darkened for L'Officiel magazine
--

It's New Year's Day 2010, and blogs are doing their yearly roundup of where all the A-listers spent their Auld Lang Syne. Lady Gaga was in Miami. Fergie was in Las Vegas. And superstar Beyoncé was in St. Barts. No big deal there, right? OK, it was a little weird that the performance -- which included Usher -- happened to be for the son of Libyan dictator Moammar Gadhafi.

According to a WikiLeak published in the New York Times, the show was a culmination of a year of bad-boy, partying behavior from National Security Advisor (and son of Moammar) Mutassim al-Gadhafi. Moammar's other son Seif al-Islam el-Gadhafi may have also been involved in the bash. People were pissed.

local political observer XXXXXXXXXXXX told us that the Qadhafi family has been consumed in recent weeks by efforts to control the damage from Mutassim and Hannibal's recent headline-grabbing behavior. National Security Advisor Mutassim al-Qadhafi kicked off 2010 in the same way he spent 2009 -- with a New Year's Eve trip to St. Bart's -- reportedly featuring copious amounts of alcohol and a million-dollar personal concert courtesy of BEYONCE, Usher, and other musicians. Mutassim seemed to be surprised by the fact that his party was photographed and the focus of international media attention.

XXXXXXXXXXXX, his carousing and extravagance angered some locals, who viewed his activities as impious and embarrassing to the nation.

When Mediaite reported on the party in 2010, they mentioned other stars at the event: Jay-Z, Lindsay Lohan, Russell Simmons, Miranda Kerr and Victoria Slivstedt. Beyoncé received a "six figure sum" for her performance at the party of men who accepted responsibility for the bomber who took down Pan Am 103 in 2004. For 2008, Jay-Z and Mariah both performed at a similar Libyan-expensed blowout, and then 20 days later went to perform for the Obamas (along with Beyoncé).

There is enough celebrity blame to go around for being paid in blood money to perform, and it's doubtful that Beyoncé or Jay would consider performing at next year's bash, now that Libya is all over the news for its protester blood bath. Still, the couple got away relatively unscathed in the media for their relationship with the dictator's family, which is more than a little odd, especially since both (but especially Jay-Z) are considered political activists in the music industry. How could they not have known who was funding their performances? Are we really supposed to believe that a politically aware power couple like Jay and Beyoncé were just unable to "see (Mutassim's) halo," as Mediaite wrote? It's also strange how these documents are coming to light now, as if they were a secret, when everyone from Page Six to the Daily Mail reported on the event at the time. (The Mail went as far as to title the piece "Beyonce shows off her strong thighs as she performs in St Barts in a cutaway leotard.")

So is America just unwilling to be mad at Beyoncé? This was put to the test recently when the star "darkened her face" (do not call it blackface!) for a spread in the French magazine L'Officiel Paris, which celebrated its 90th anniversary. She was paying tribute to Fela Kuti, the Nigerian musician and human rights activist who has "heavily influenced" Beyoncé's fourth album.

From the editor's desk of L'Officiel:

To celebrate this anniversary, the festivities start with the March issue, with Beyoncé on the cover. She agreed to pose for an incredible fashion shoot, with the theme of African Queen, paying a tribute to the legendary Fela Kuti. Far from the glamorous Sasha Fierce, the beauty posed for the magazine with amazing fashion designers clothes, but also in a dress created by her mother. [It is] A return to her African roots, as you can see on the picture, on which her face was voluntarily darkened.

So it's a tribute, and a statement, and as some bloggers are saying: "What's the big deal?" if an artist who identifies as African-American chooses to darken her features? It's a tribute to her heritage, not a minstrel show, and the fact that only a few journalists are willing to even take a stand on the issue without putting a question mark after the word "offensive" speaks to the power of this precedent. Which is great for Beyoncé's sleight-of-hand, as we're all so busy debating whether or not it's racist to think Beyoncé darkening her face is racist that we've ignored the fact that the singer and her husband have twice now taken large sums of money from the family of a dictator who is currently killing off protesters in his country.

Beyoncé doesn't have to apologize for her L'Officiel shoot. But she should be donating some of that $2 million back to organizations helping people in the Mideast.