Scott Walker thinks he's talking to David Koch. In fact, it was a journalist from the Buffalo Beast. Listen in full 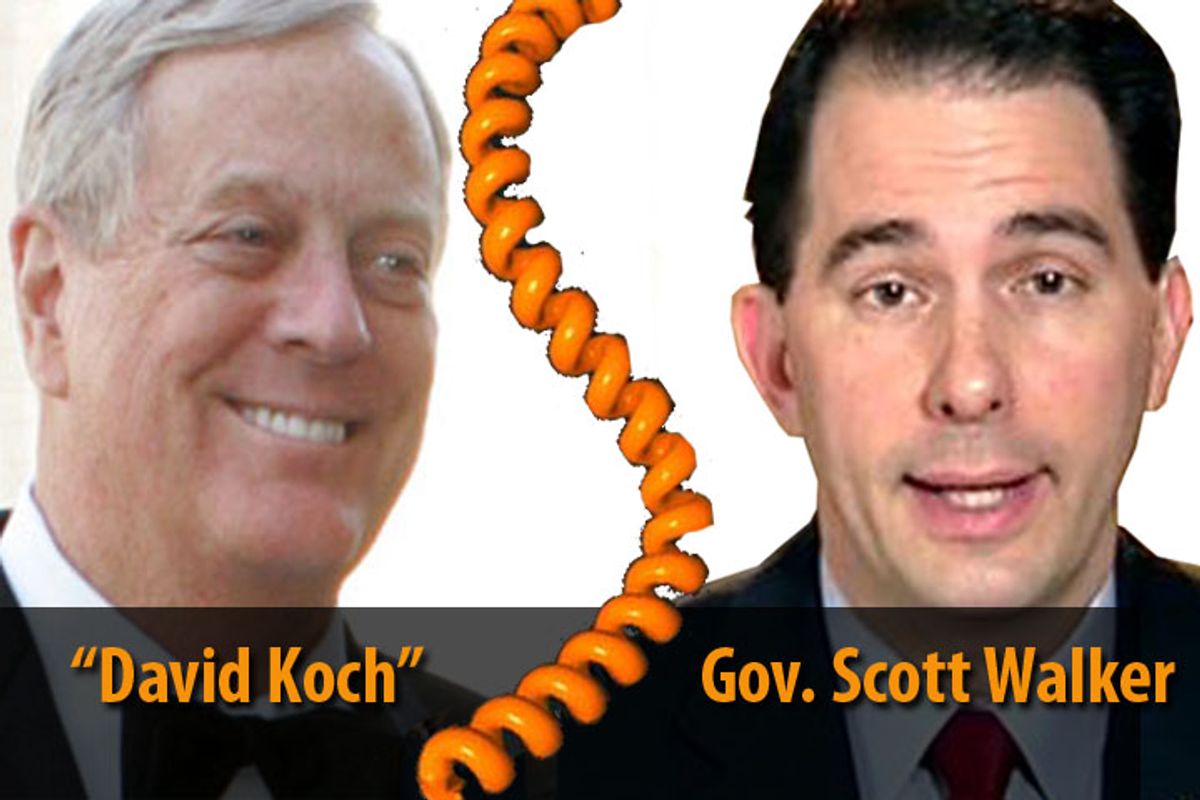 A gonzo reporter from an alt-weekly in Buffalo, New York, just got Scott Walker to tell all on Tuesday. Posing as David Koch, one of the Tea Party puppeteers and a big Walker campaign contributor, Ian Murphy talked his way onto the phone with the Wisconsin state governor and kept his cool long enough for Walker to divulge the inside details of the Wisconsin protests. Here's the call in two parts.

Getting Walker on the phone wasn't tough, wrote Murphy.

“We’ve met before, Dorothy,” I nudged. “I really need to talk to Scott—Governor Walker.” She said that, yes, she thought she had met Koch, and that the name was “familiar.” But she insisted that Walker was detained in a meeting and couldn’t get away. She asked about the nature of my call. I balked, “I just needed to speak with the Governor. He knows what this is about,” I said. She told me to call back at noon, and she’d have a better idea of when he would be free.

I called at noon and was quickly transferred to Moore, who then transferred me to Walker’s Chief of Staff Keith Gilkes. He was “expecting my call.”

“David!” he said with an audible smile.

UPDATE (11:25 A.M. EST)
The Wisconsin governors office confirms that it was indeed Scott Walker on the line on Tuesday:

"The governor takes many calls everyday," Walker's spokesman, Cullen Werwie said in a statement. "Throughout this call the governor maintained his appreciation for and commitment to civil discourse. He continued to say that the budget repair bill is about the budget. The phone call shows that the governor says the same thing in private as he does in public and the lengths that others will go to disrupt the civil debate Wisconsin is having."