Kate Hudson, Pink, Alicia Keyes bring their fecundity to a tabloid near you. Are you buying it? 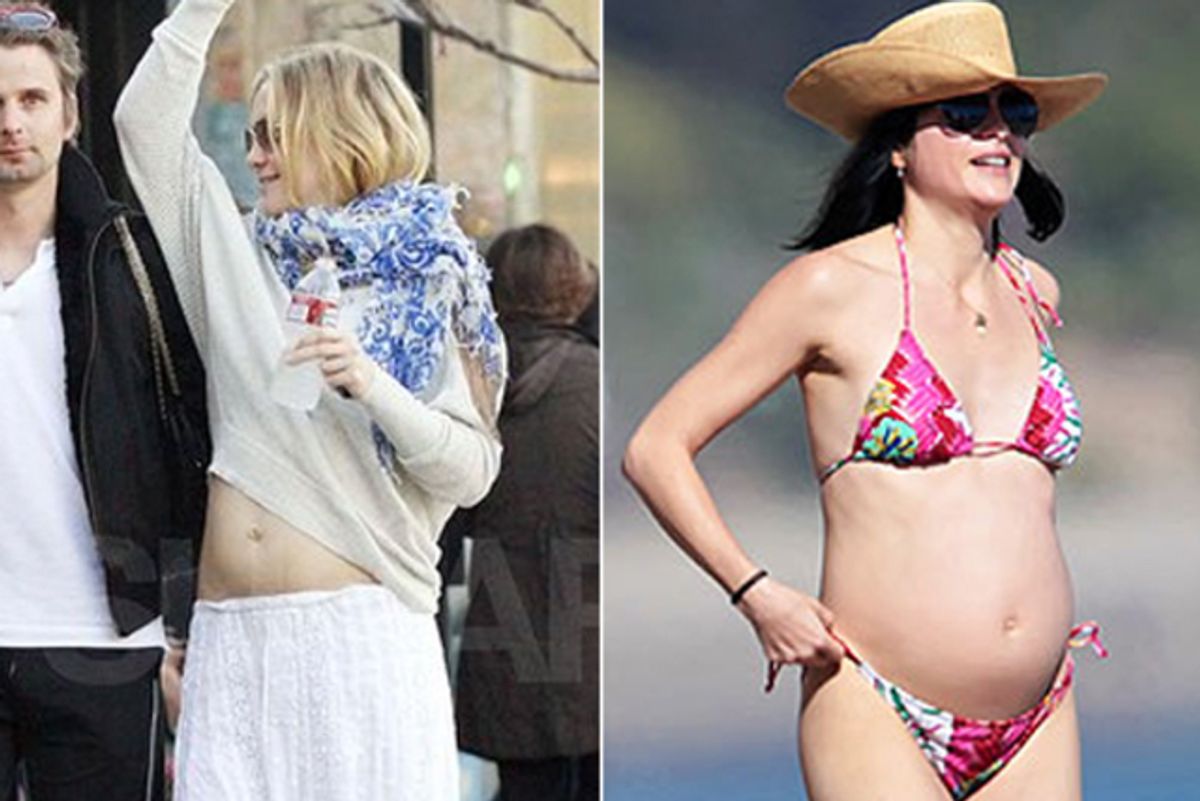 There comes a time in a female celebrity's life when it becomes acceptable – sexy, even – to show off a big bulging gut. Thanks, pregnancy!

On Tuesday, Kate Hudson, who shimmied into a skintight cutout gown two weeks ago for the Grammys, was snapped unself-consciously letting it all hang out while strolling in Los Angeles with boyfriend Matthew Bellamy. Eight years ago, when Hudson was pregnant with her first child, her belly-flaunting ensembles were something of a rarity. Now in Hollywood, they're practically a requirement.

Sure, the artfully shot, sexy nude or semi-nude photo of a famous female in all her fecund glory has been popular ever since Demi Moore's infamous Vanity Fair cover 20 years ago. Since then, Monica Bellucci, Claudia Schiffer, Cindy Crawford,  Britney Spears and Christina Aguilera have all gone the demurely nipple-covering, bump-flaunting route, and Heidi Klum has pretty much spent the better part of the past decade posing undressed and knocked up in magazines. There's nothing quite like two lines on a urine-covered stick to guarantee a lady the June cover of W. But those images have all been as tightly controlled, glammed up and overtly sexy as any lingerie shoot for Maxim.

What's different now is the pregnant celebrity belly out and about, walking among us. Part of the change is due to the sheer appetite for images now; a lady can't let her top ride up in public without a host of paparazzi waiting to snap her popped-out bellybutton. Both Alicia Keys and Selma Blair have been  photographed recently in bikini-wearing states of pregnancy – and the public reactions have been mixed. While many Internet commenters have been quick to swoon over how "gorgeous" and "beautiful" they appear, others referred to Keys as looking "foolish and desperate" and chided Blair, "A one-piece can be just as sexy without being so obvious."

Maybe that's why celebs themselves, spurred by the increasing intimacy of the medium, have taken matters into their own hands. What once would have been a private snapshot is now an opportunity for connection -- and control. Last year, an exhausted looking, pregnant Bethenny Frankel posted a shot of a bare belly peeking out beneath a tee bearing the ironic tag line from her diet book, "Skinnygirl." "I'm a swollen beast," she wrote. "My face exploded." There. She said it, so the Daily Mail didn't have to. And earlier this month, Pink tweeted, "ALRIGHT... because paparazzi of today have absolutely no photographic skill or artistry whatsoever, and their pictures are hideous.... I'm going to post a self-portrait I took yesterday morning for all of you asking to see belly shots. 3 wks of photo classes for me... and I am already a far better photographer than any one of them..." and shared an intimate, casual Twitpic of a scrunched up shirt and her hand caressing her bare stomach.

There was a time when images of pregnancy were all but taboo, and the notion that a pregnant woman could feel -- and, in fact, be -- attractive and sexy was considered crazy talk. The increasing acceptance that a pregnant body is a beautiful body is good news for every woman who will not go quietly into elastic-waisted mom jeans. But it also contributes to the notion of the perpetually hot, sexually available female, one who is rarin' to go even when she's just put on 60 pounds, has developed hemorrhoids and flatulence, and spent her lunch break throwing up. And of course, it doesn't change the imperative that this glowing vision of MILF curviness not show any signs of stretch or sag after she pops out the kid. Nope, the next route is the magazine cover bragging how she lost the baby weight, and hitting the runway again six weeks later.

No wonder celebrities might relish a few months of their lives to have their already much-scrutinized bodies not under fire for being too fat or too skinny or somehow just too wrong. But in celebrating the bare, pregnant movie star belly, it seems we're still creating the wrong kind of expectation.