Gadhafi's forces clamp down in Tripoli, while Eastern cities break grip of government 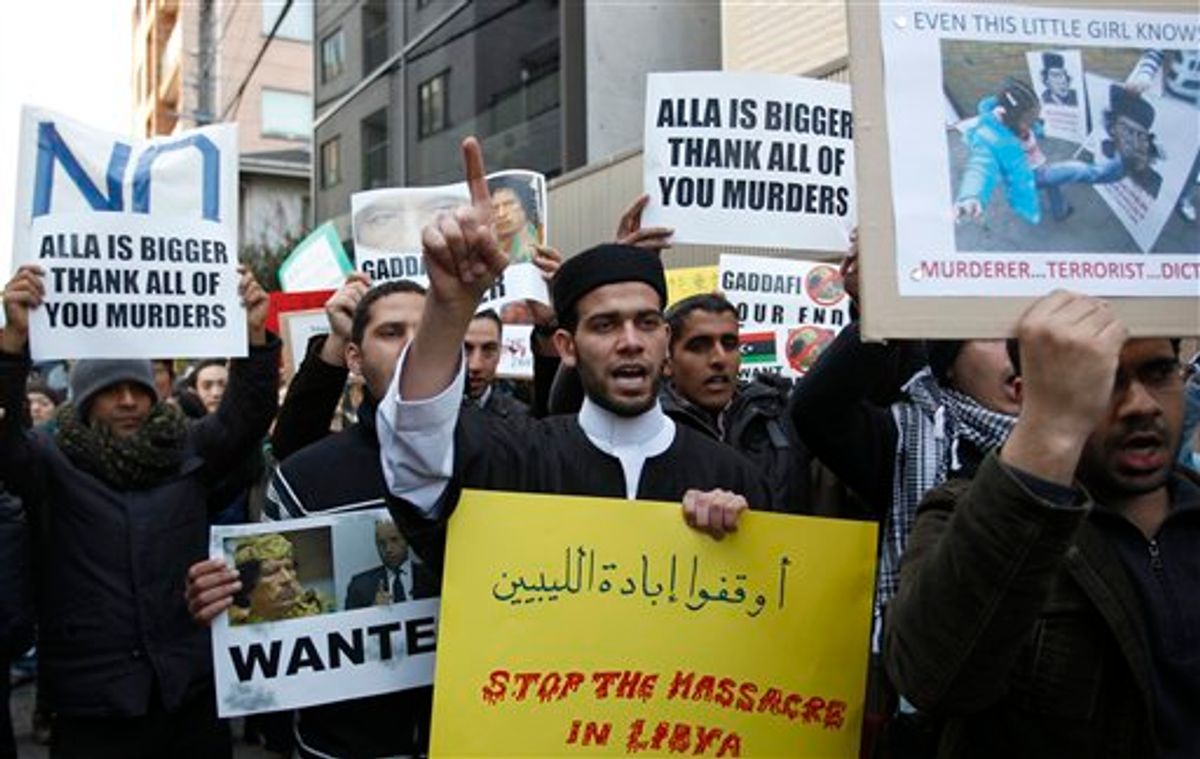 Libyans living in Japan and their supporters shout slogans against Libyan leader Moammar Gadhafi in front of the Libyan embassy in Tokyo, on Wednesday, Feb. 23, 2011. (AP Photo/Shizuo Kambayashi) (AP)
--

Heavy gunfire broke out in Tripoli as forces loyal to Moammar Gadhafi tightened their grip on the Libyan capital while anti-government protesters claimed control of many cities elsewhere and top government officials and diplomats turn against the longtime leader.

While residents of cities in the eastern half of the country celebrated, raising the flags of the old monarchy, the mood in Tripoli was bleak. Residents were afraid to leave their houses, saying pro-Gadhafi forces were opening fire randomly in the streets.

Italy's Foreign Minister Franco Frattini said estimates of some 1,000 people killed in the violence in Libya were "credible," although he stressed information about casualties was incomplete. The New York-based Human Rights Watch has put the death toll at nearly 300, according to a partial count.

The fighting in Tripoli came as the opposition reportedly seized control of Misrata, with witnesses saying people were honking their horns and raising pre-Gadhafi flags from the monarchy to celebrate.

Misrata would be the first major city in the west to fall to anti-government forces, which have mainly been concentrated in the east. Faraj al-Misrati, a local doctor, said six residents had been killed and 200 injured since Feb. 18, when protesters attacked offices and buildings affiliated with Gadhafi's regime.

He said residents had formed committees to protect the city, clean the streets and treat the injured.

"The solidarity among the people here is amazing, even the disabled are helping out," he said in a telephone interview.

New videos posted by Libya's opposition on Facebook also showed scores of anti-government protesters raising the flag from the pre-Gadhafi monarchy on a building in Zawiya, on the outskirts of Tripoli. Another showed protesters lining up cement blocks and setting tires ablaze to fortify positions on a square inside the capital.

The footage couldn't be independently confirmed.

Gadhafi defiantly vowed to fight to his "last drop of blood" and roared at supporters to strike back against Libyan protesters to defend his embattled regime Tuesday in a televised speech that served as an all-out call for his backers to impose control over the capital and take back other cities.

After a week of upheaval, protesters backed by defecting army units have claimed control over almost the entire eastern half of Libya's 1,000-mile (1,600-kilometer) Mediterranean coast, including several oil-producing areas.

"You men and women who love Gadhafi ... get out of your homes and fill the streets," Gadhafi said. "Leave your homes and attack them in their lairs."

Celebratory gunfire by Gadhafi supporters rang out in the capital of Tripoli after the leader's speech, while in protester-held Benghazi, Libya's second-largest city, people threw shoes at a screen showing his address, venting their contempt.

A woman who lives near downtown Tripoli said heavy gunfire erupted Wednesday morning as armed Gadhafi backers and mercenaries hired from other countries opened fire on the streets. She said her nephew has been missing since Tuesday.

"He went to join the protests and he didn't come back. The whole family is panicking," she said. "We are under siege."

She said the streets were empty and even injured people couldn't go to the hospital for fear of being shot.

Gadhafi appears to have lost the support of at least one major tribe, several military units and his own diplomats, including Libya's ambassador in Washington, Ali Adjali, and deputy U.N. Ambassador Ibrahim Dabbashi.

The Libyan Embassy in Austria also condemned the use of "excessive violence against peaceful demonstrators" and said in a statement Wednesday that it was representing the Libyan people.

International alarm has risen over the crisis, which sent oil prices soaring to the highest level in more than two years on Tuesday and sparked a scramble by European and other countries to get their citizens out of the North African nation. The U.N. Security Council held an emergency meeting that ended with a statement condemning the crackdown, expressing "grave concern" and calling for an "immediate end to the violence" and steps to address the legitimate demands of the Libyan people.

French President Nicolas Sarkozy also pressed Wednesday for European Union sanctions against Libya's regime because of its violent crackdown on protesters, and raised the possibility of cutting all economic and business ties between the EU and the North African nation.

"The continuing brutal and bloody repression against the Libyan civilian population is revolting," Sarkozy said in a statement. "The international community cannot remain a spectator to these massive violations of human rights."

Italian news reports have said witnesses and hospital sources in Libya are estimating there are 1,000 dead in Tripoli, the Libyan capital, alone.

"We have no complete information about the number of people who have died," Frattini said in a speech to a Catholic organization in Rome ahead of a briefing in Parliament on Libya. "We believe that the estimates of about 1,000 are credible."

Libya is the biggest supplier of oil to Italy, which has extensive energy, construction and other business interests in the north African country and decades of strong ties.

Frattini said the Italian government is asking that the "horrible bloodshed" cease immediately despite Gadhafi's vow to fight on and cling to power.