The former White House chief of staff has his work cut out for him, will have to address Chicago's shaky finances 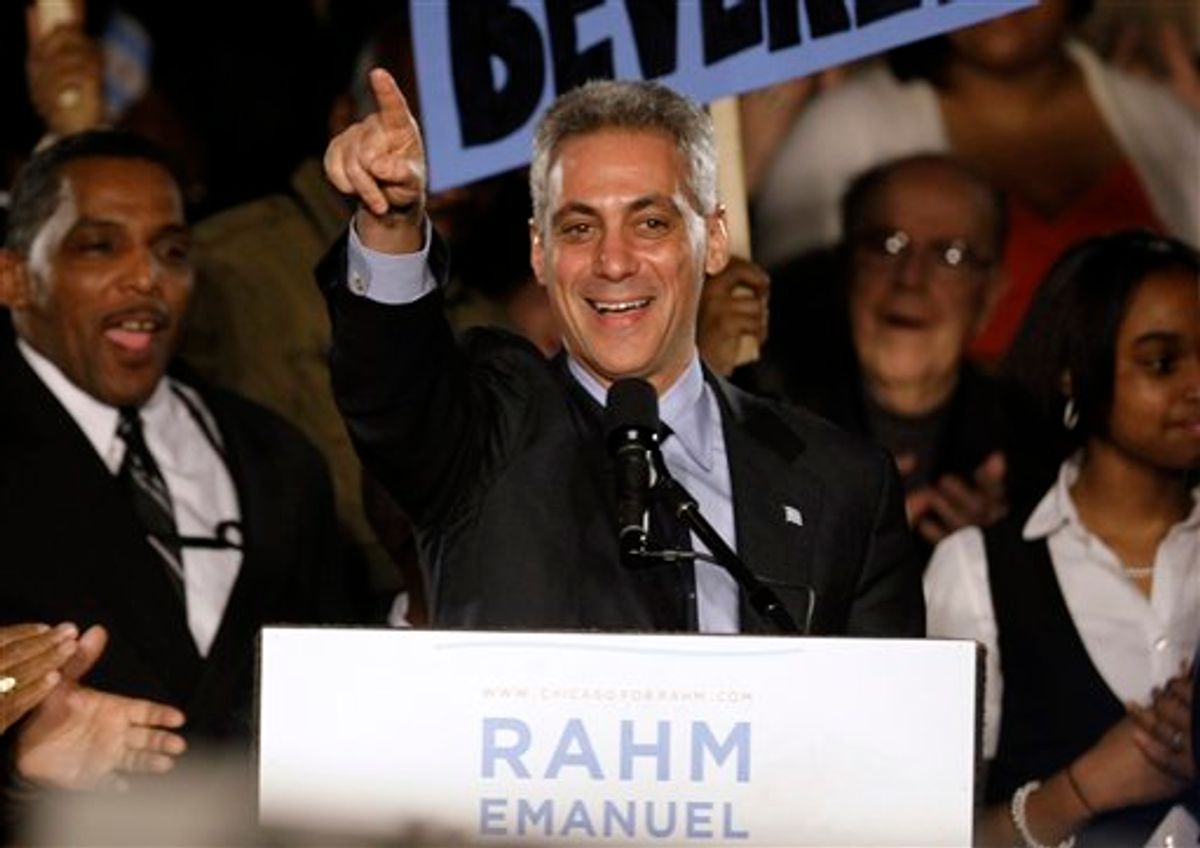 Former White House chief of staff Rahm Emanuel won't have much time to celebrate his victory as Chicago's new mayor.

Emanuel, who overwhelmed the race with truckloads of money and friends in high places from Washington to Hollywood, will take control of a city in deep financial trouble with problems ranging from an understaffed police department to underperforming schools.

On Tuesday, Emanuel won 55 percent of the vote, easily outdistancing former Chicago schools president Gery Chico, who had 24 percent, and former U.S. Sen. Carol Moseley Braun and City Clerk Miguel del Valle, who each had 9 percent. He succeeds Mayor Richard M. Daley, who is retiring after 22 years in office as the longest-serving mayor in Chicago's history.

But the city he inherits, though perhaps more beautiful than ever after years of extensive urban improvements, is in financial straits that it hasn't seen since before Daley's father, Mayor Richard J. Daley, came to power in the 1950s.

"Not since the Great Depression have the finances of the city been this precarious," said Dominic Pacyga, a historian and author of "Chicago: A Biography." The city's next budget deficit could again exceed $500 million, mostly the result of reduced tax revenue from the recession, and could reach $1 billion if the city properly funds its pension system.

He'll have to find new leadership for the struggling public school system, as two top interim executives plan to leave. He'll also need a new police chief, having said he would not renew Police Superintendent Jody Weis' contract. The department is suffering from low morale and staffing estimated at 1,000 officers below previous levels.

Members of the City Council, including a number elected Tuesday, have made clear they will demand more authority after years of domination by Daley.

In 25 years of public life, Emanuel has earned a reputation as a skilled politician and as a political operative, serving in both the Clinton and Obama administrations and as a congressman from Chicago. But the mayor's office will test his mettle as an executive.

Throughout the campaign, Emanuel has acknowledged he'll have to make budget cuts, and has promised to spread the pain as fairly as possible, starting with his own office.

But, like the other candidates, he has been vague about how he'll accomplish the reductions. And nothing he has suggested comes close to the projected deficit.

Emanuel said he can save $110 million by streamlining "outdated and duplicative work processes to focus on front-line service delivery," according to his campaign. His campaign did not use the word "layoffs," but it did allude to "reducing layers of management bureaucracy and consolidating redundant tasks."

"What comes next is a bunch of ugly," said Ralph Martire, executive director of the bipartisan Center for Tax and Budget Accountability. "It's going to be a brutal budget year and there are not quick and easy fixes."

The politics of the cuts could be perilous. Most of the deficit is in the $3.1 billion general fund, which pays for the police and fire departments, which have been cut significantly since 2000, Martire said.

As for the underfunded pensions, Emanuel said he wants to "preserve" the pensions but may seek to negotiate changes. He insists the city can solve the problems without a confrontation like the one in Wisconsin, where tens of thousands of people have been demonstrating outside the Capitol to protest anti-union budget cut legislation. "We have to find, I think, common ground and a sense of hope," he said during a campaign stop this week.

Still, some Chicago officials say the pensions will be hard to finesse. "This mayor is going to have to find a way to balance that too, in a way that doesn't alienate our city workers, who are incredibly hardworking folks," said Alderman Sandi Jackson.

Already, various unions are bracing for a fight. More than a half dozen unions endorsed Chico, including the police and fire unions.

Emanuel has also talked about expanding the city sales tax to include more services, while lowering its overall rate, but he'll need approval from the state General Assembly.

Many voters hope Emanuel's clout in national politics will help him find outside avenues for help. President Obama expressed support for Emanuel when he left the White House, and heavy hitters in the political and entertainment communities contributed to his campaign.

"He's (got) political savvy. He's politically tied in. That's important to me because he can get things done," said Ralph Vallot, 57, dean of students at a Chicago high school.

Loren Miller, 65, who is retired and served as an election judge at a Michigan Avenue polling place, said it's a turning point for the city. "The future's going to be interesting. This is going to be a tough period of time for the city," Miller said.