The battle for Wisconsin goes to Washington 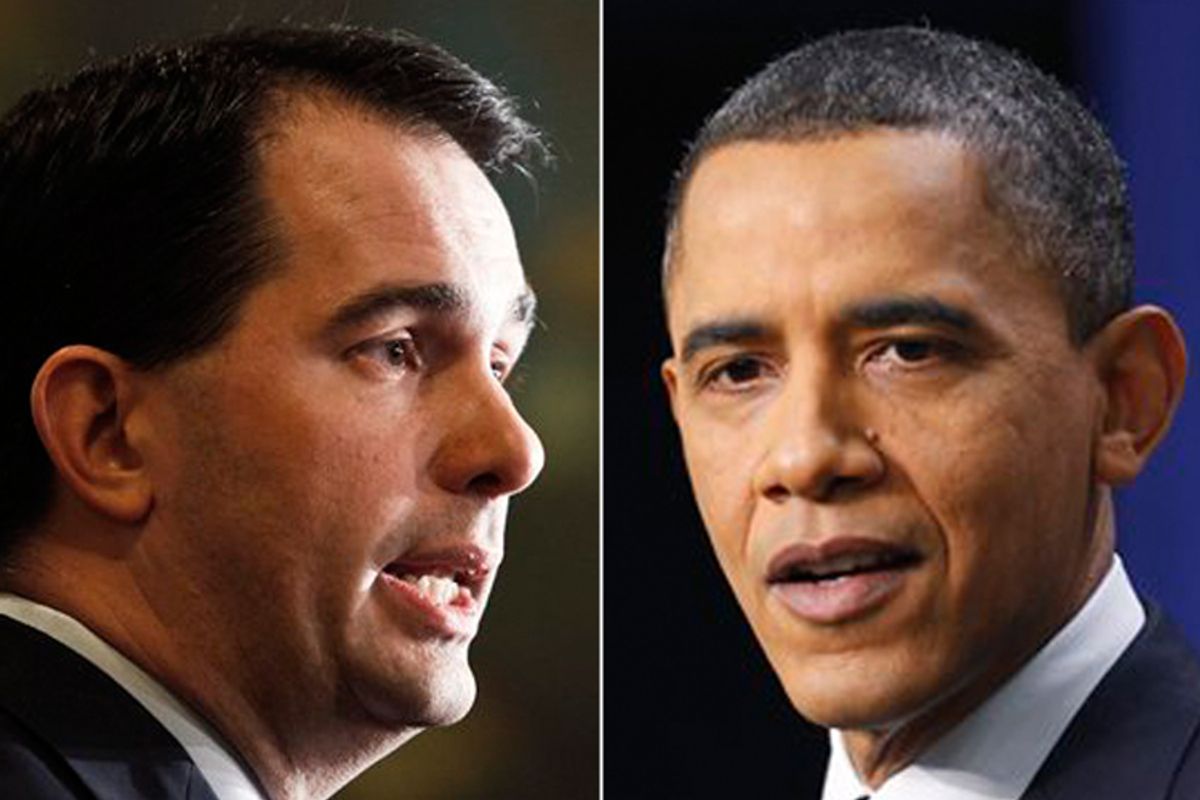 With all the extraordinary things that are happening in Wisconsin -- mass protests, legislators on the lam, impromptu firefighter bagpipe concerts -- it's been easy to forget that an equally epic clash in Washington is just days away. The current continuing resolution that authorizes the federal government to spend money expires on March 4. If Congress and the White House fail to agree on an extension of the continuing resolution, or a package of spending cuts that can pass both the House and the Senate, the government will be forced to start shutting down.

With each day that passes the odds of a government shutdown appear to be rising, for at least two reasons that have been obvious for months: Both sides are betting they can convince the public to blame the other for any shutdown-related disruptions, and the House has 87 new freshman Republicans who did not come to Washington to compromise. Now let's add a third: The partisan furor over Wisconsin seems bound to heighten partisan tensions in Washington.

As numerous political commentators have noted, one of the striking aspects of the battle over Wisconsin is that both the right and the left think that Gov. Walker's decision to pick a do-or-die fight with the public sector unions is a huge winning issue for their side. Conservatives are certain that the political climate is ripe for combining spending cuts with a final assault on the last bastion of union power in the United States. Liberals are equally convinced that Walker has made a fatal miscalculation -- in a state with a proud history of labor activism and no significant long-term public sector pension problems, his surprise demand to eliminate government union collective bargaining rights has galvanized the opposition in his state and reenergized liberals everywhere. A Tea Party governor has handed the left its own Tea Party moment.

It seems impossible that the passion on both sides won't directly translate to the Washington budget struggle. In fact, one could argue that it already has. Even as the Wisconsin protests were growing in strength at the end of last week, the Republican-controlled House went out of its way to poke Democrats by voting to cut or end funding not just for crucial parts of the Obama agenda -- healthcare reform, the EPA and financial sector regulation -- but also for programs that are of great symbolic and cultural importance to liberals: Planned Parenthood being exhibit A. It's almost as if Republicans wanted to poke a stick in the Democratic anthill, and spur millions of Americans who had become disappointed with President Obama's record over the last two years to remember all over again exactly why elections matter. On social media networks, liberal outrage at the attack on Planned Parenthood was paired with pride at the footage of Wisconsin protests. The two dramas were mutually reinforcing -- by golly, if this is what the right really wants, it's time to hit the barricades.

The result is that public pressure on both sides demanding that no concessions be made is likely to be dramatically higher in the next few days than one could have expected just a couple of weeks ago. The latest news reports have Senate Majority Leader Harry Reid introducing legislation that would extend the continuing resolution for 30 days while keeping current spending levels in place. Republicans are scoffing at the proposal, declaring that they will agree to no extensions at all that do not include spending cuts right now. But by larding up their  cuts with the most politically motivated gestures possible, Republicans have neatly boxed themselves in. Neither the Senate nor the Obama administration is going to agree on a spending plan that includes zeroing out federal support for Planned Parenthood or the Corporation for Public Broadcasting. So to get even temporary agreement, Republicans are going to have to back away from their most audacious proposals -- and that's just not something the Tea Party faction appears willing to do.

In this scenario, the drama in Wisconsin can only stiffen everyone's backs. Democrats are backslapping each other over polling data that seems to indicate that the general public thinks Walker has overreached. But Republicans still see Walker as a hero who will ultimately prevail. Despite all the protests, eventually Wisconsin state senators are going to have to return to their jobs, and, barring a stunning change of heart by members of his own party, Walker will have the votes to pass his bill. In this all-out ideological war, which, as Ezra Klein percipiently notes, is more about raw power than anything else, no matter what happens in Wisconsin, each side, nationally, will turn its attention back to the budget fight in Washington with its partisan batteries pumped up to full charge.

It is far too soon to tell whether the Wisconsin protests represent the Tea Party's high-water moment, a turning point that fundamentally changes the political fortunes of Democrats and Republicans over the next two years. But the possibility is there, which means that the showdown in Washington will be played for the highest stakes. If there's anything we can learn from Wisconsin, it's that the right wing does not have a monopoly on righteous passion. Both sides have their game faces on now.