Bad day in Wisconsin: The governor brushes off his prank call while warning of thousands of state worker layoffs 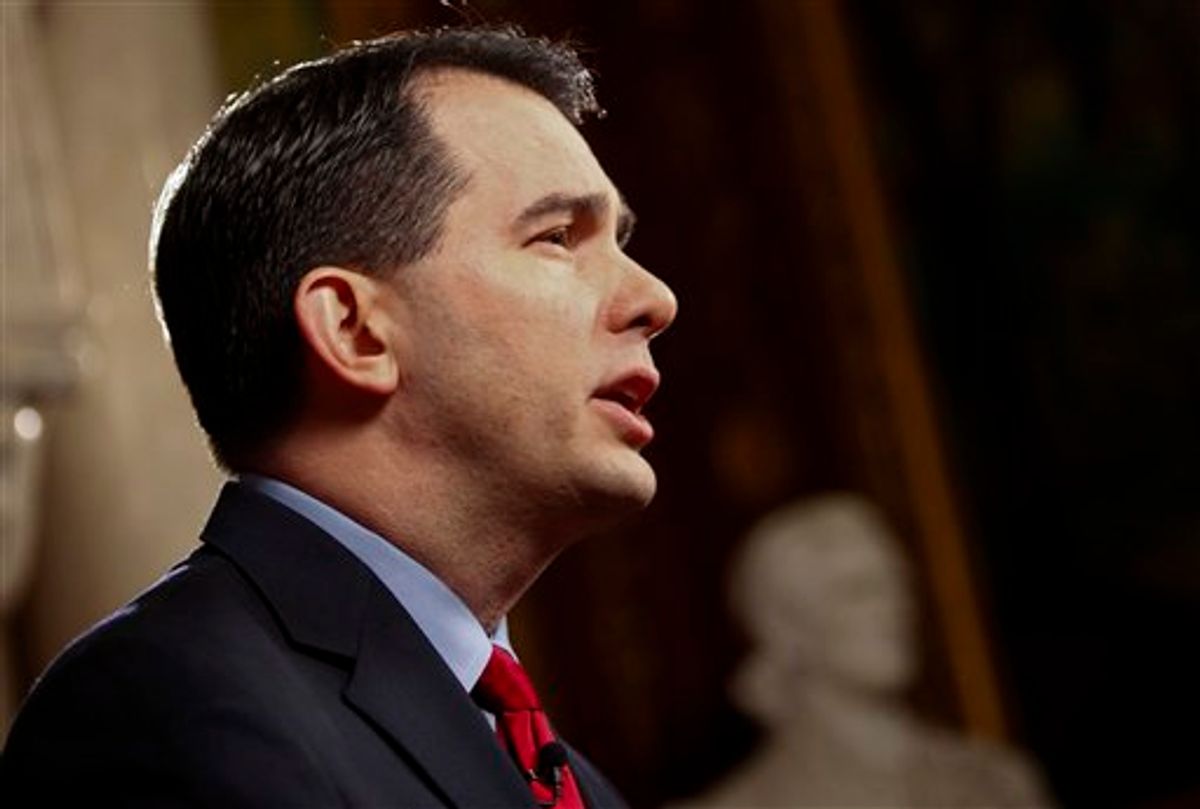 Wisconsin Gov. Scott Walker can be excused for looking pale and a little nervous in his Wednesday afternoon news conference. It's not every day that a governor at the heart of the biggest political story in the United States is humiliated by the revelation that he managed to fall for a prank-call from a blogger pretending to be a libertarian billionaire. But like a good soldier, he ploughed straight ahead -- in the 20 minutes of the conference broadcast by MSNBC, Walker unleashed a cascade of fearful numbers outlining Wisconsin's budget situation and warned of "dire consequences" if the 14 renegade Democratic state senators don't return immediately and allow a vote on the bill to proceed.

If the Democrats do not allow the "budget repair bill" to pass, the state will be forced to lay off thousands of workers, declared Walker. All he was asking for, he repeated several times, was for state workers to "make shared sacrifices."

But state workers have already agreed to make the sacrifices that would have a direct impact on the Wisconsin budget -- the public sector unions are not fighting Walker's demand that they contribute to their pension funds and health plans. What they are balking at is the surprise attack on their collective bargaining rights. Notably, Walker did not mention the words "collective bargaining rights" during the first 20 minutes of his press conference.

If Walker dropped his attempt to break the unions, he could end the Wisconsin standoff instantly. But he is refusing to bend. It's a strategy that doesn't seem to be working, at least so far. Maybe the real reason why Walker looked so pale stems from a growing realization that his hardline stance has put him in a ever-weaker position. As each day passes, elements of the budget repair bill that might never have received any serious public attention are getting wider and wider play. First there was the revelation that the bill authorizes the state to sell off power plants to anyone it pleases, at any price, without public oversight. Then came the details of a plan to allow the state department of health to arbitrarily decide who gets covered by Medicaid, regardless of what state law mandates.

Walker could probably have gotten nearly everything he wanted in his bill if he hadn't sought to strip public sector unions of their collective bargaining rights, or if he had made a good faith effort to negotiate with state workers. But he didn't. Now he is reduced to threatening layoff blackmail, and his bill has been exposed as a raw political power grab, rather than a sincere effort to balance the budget.

As for the call -- Walker put a brave face on the prank, asserting that "the things I said are the things I've said publicly all the time."

Maybe he's right. The first thing that comes to mind is Walker's declaration that "this is our moment," right after the David Koch impersonator tells him "you're the first domino" -- meaning, the first in a wave of aggressive Republican governors aiming to take down public sector unions. The funny thing is, the unions would tell you the same thing. It's everybody's moment. One way or another, what happens in Wisconsin will have a strong impact on the future course of politics in the entire nation.

It's enough to make any governor pale.