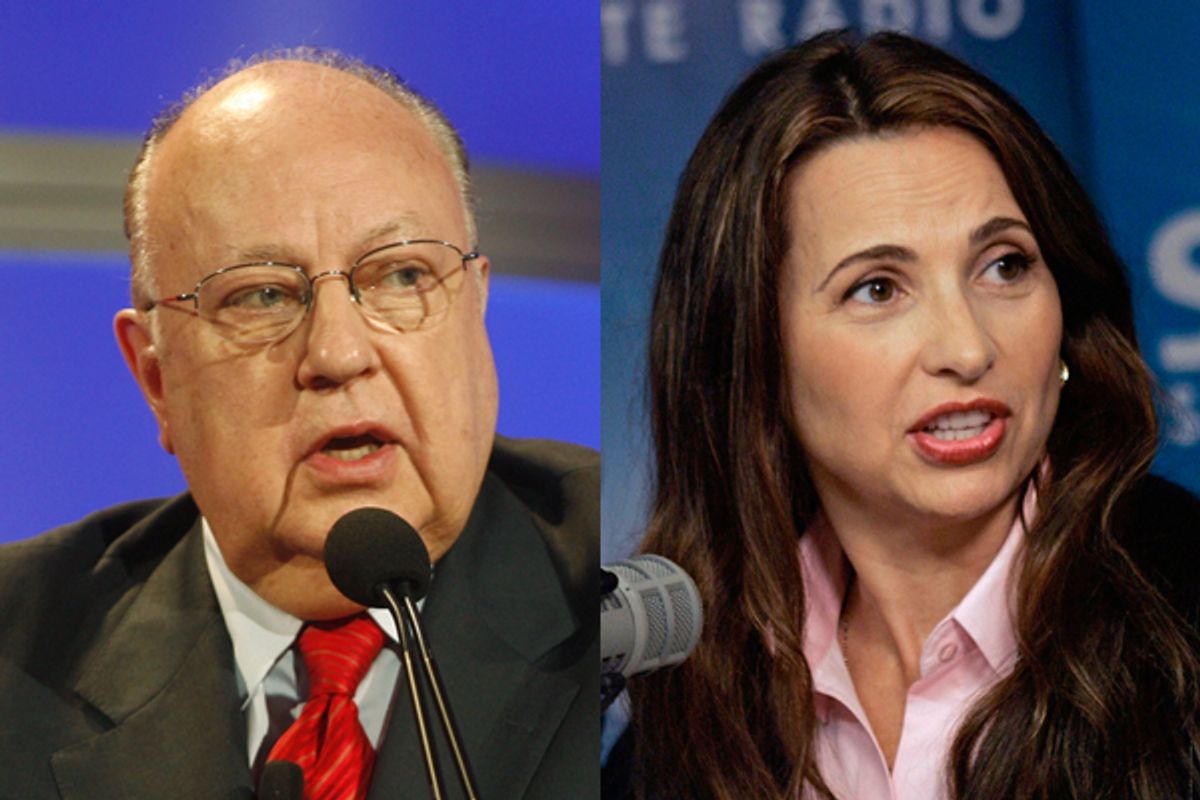 Back in 2007, it was hard not to enjoy the muddy brawl between publishing diva Judith Regan and Rupert Murdoch's News Corp., her former employer. It featured the best cast of conservative bad guys around -- George W. Bush, Rudy Giuliani, Giuliani's former bodyguard, police commissioner (and Regan lover) Bernie Kerik, plus those lovable guys who bring us Fox News, Murdoch and Roger Ailes. The former allies fell apart, you'll recall, when Murdoch fired Regan, News Corp. claimed she was an anti-Semite who had blamed her troubles on "a Jewish cabal," and the brassy Regan sued.

Among Regan's many charges against her old employer was the claim that a top News Corp. executive told her to lie to federal investigators about her affair with Kerik, when he was (unbelievably) being vetted to head Bush's Department of Homeland Security in 2004. (He dropped his bid when legal troubles came to light, and he's currently in prison for tax fraud.) The exec told her to lie, Regan said, to protect Giuliani, a candidate for the Republican presidential nomination and a close friend of Roger Ailes. Fox-haters speculated the "high executive" was Ailes himself, given the fawning coverage the former New York mayor got from Fox, but Regan settled the lawsuit for a cool $10.7 million payment from News Corp., and the matter seemed to end there.

Today the New York Times reveals that it was in fact Ailes who told Regan to lie about Kerik – and the paper says Regan had tape recordings to prove it. Fox isn't even bothering to deny it; where in 2007 a News Corp. spokeswoman told the paper "the company saw no merit in the filing," Wednesday a spokeswoman said only that News Corp. had a letter from Regan "stating that Mr. Ailes did not intend to influence her with respect to a government investigation," adding, "The matter is closed." (News Corp. officially retracted its claim that Regan was anti-Semitic as part of its settlement.) Regan's lawyer insists News Corp. is misrepresenting Regan's official statement, but he declined to say more.

He doesn't need to say more: Affidavits reviewed by the Times show Regan's former lawyers discussing "a recorded telephone call between Roger Ailes, the chairman of Fox News (a News Corp. company) and Regan, in which Mr. Ailes discussed with Regan her responses to questions regarding her personal relationship with Bernard Kerik." The lawyer also said, "The Ailes matter became a focal point of our work” in preparing Regan's case against her former employer. Key to Regan's case was her claim she had been smeared with charges of anti-Semitism to preemptively discredit her in case she ever said anything about Kerik that could hurt Giuliani. "Regan believed that Ailes and News Corp. subsidiary Fox News had an interest in protecting Giuliani’s bid for the U.S. presidency," he wrote.

You'll recall that, in fact, back when Giuliani still seemed a viable presidential candidate, Kerik was a serious blemish on his record. Giuliani was regularly grilled not only about whether and when he knew about his former police commissioner's many personal and legal troubles, but also about why he would recommend the man for a cabinet post. (The Bush administration was not amused.) Days before Regan dropped her legal bombshell, the Times revealed that Giuliani had in fact been briefed about Kerik's ethics troubles by the city's investigations commissioner before Giuliani appointed him to lead the police department in 2000.

Classic Giuliani: Arrogant and stubborn. Now we have classic Roger Ailes: using his media power to protect a Republican political friend. Giuliani officiated at Ailes' last wedding, and helped when Fox couldn't get a New York cable channel. The man who started out as an aide to Richard Nixon has never left behind his party politics, despite his claims of being "fair and balanced." We'll see if Fox reports on the Times story.

Fittingly, the whole mess came to light because Regan's former lawyers are now suing Regan herself, claiming she fired them on the eve of her settlement with News Corp. to cut them out of their contingency fee. The affidavits the Times reviewed were mistakenly left public; they have since been removed from the public case file. What a tangled web.

Judith Regan was last seen on the Bravo television hit "Millionaire Matchmaker," which sets up lonelyhearts moneybags with appropriate partners. (Her TV date went well; no affidavits have come to light revealing whether she found true love.)

Bernie Kerik was last seen on Twitter, railing against the so-called ground zero mosque -- from prison. It all makes sense: Fox helped gin up the mosque non-story; Park51 is only blocks from the apartment for 9/11 rescuers that Kerik used as a love nest during his affair with Regan, which Ailes wanted Regan to lie about.

And Rudy Giuliani? His presidential bid imploded in 2008, he had to fold his consulting firm last year, but the New York Post claimed last month that he's looking at a 2012 presidential bid. The Post is, of course, owned by News Corp.