Will those who insisted that presidents must defend all statutes criticize him for his gay marriage reversal? 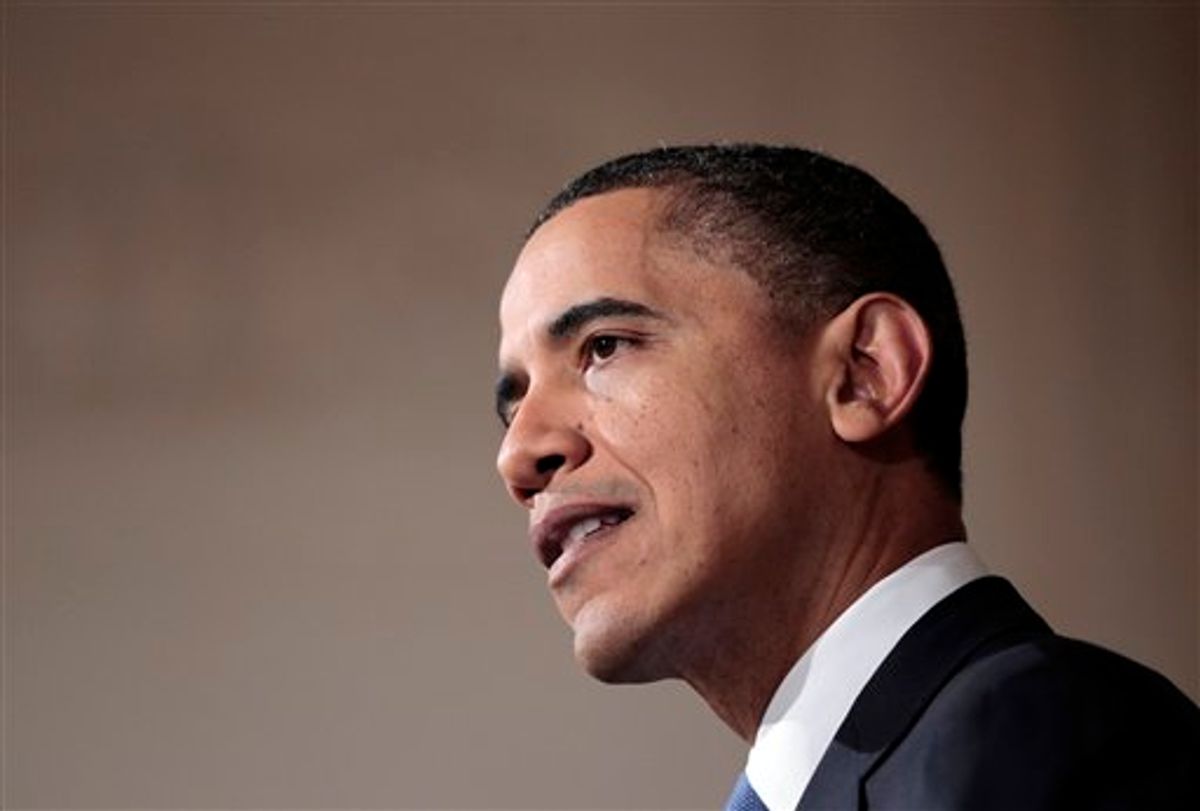 President Barack Obama speaks about the situation in Libya in the Grand Foyer of the White House, Wednesday, Feb. 23, 2011, in Washington. (AP Photo/Pablo Martinez Monsivais) (AP)
--

I was on Democracy Now this morning discussing the extradition ruling in the Julian Assange case, the HBGary story, the President's reversal on defending the constitutionality of DOMA and several other issues, and was on Lawrence O'Donnell's program last night discussing the DOMA issue.  The videos of both segments are posted below, but I want to make one point about the debate over DOMA.

Something very similar happened in 2009 when President Obama reversed his decision about whether to release photographs of detainee abuse which two federal courts had ruled must be disclosed pursuant to the Freedom of Information Act.  Originally, Obama announced that he would release those photos, and when he was attacked by the Kristol/Liz-Cheney-led Right for harming national security, virtually all Democrats defended him by citing the virtues of transparency.

Yet a mere two weeks later, Obama reversed himself and announced that he would conceal the photos on the ground that their release would harm national security (invoking precisely the Kristol/Cheney argument), and most Democrats . . . then defended that position, even though it was exactly the opposite of the position they took a mere two weeks earlier (a similar incident occurred when Democrats vocally defended Eric Holder's decision to try Khalid Sheikh Mohammed in a civilian court on the ground that such trials are compelled by "the rule of law," yet now refrain from criticizing the President for "suspending" that decision and refusing to give Mohammed (and many other detainees) a trial, even though, logically, those progressives would have to see denial of such trials as a violation of the very same "rule of law" they cited to justify Mohammed's civilian trial).

For two years now, the Obama DOJ has been defending the constitutionality of DOMA in federal courts around the country.  In response to objections from gay groups, Obama officials -- and their supporters -- insisted that the President had no choice, that it's the duty of the Justice Department to defend the constitutionality of all laws enacted by Congress, and that it's dangerous for the President to pick and choose which laws to defend or not defend.   That's actually a reasonable position; there is a genuine danger in having the President selectively defend Congressional statutes (although many past administrations have refused to defend particular laws where they believed they could not in good faith do so).  Although I believe it is appropriate in rare cases for the DOJ to refuse to defend a statute or even affirmatively argue for its unconstitutionality (provided it continues to enforce the law until it's repealed or struck down), there is a valid concern on the part of those who argue -- as Obama supporters did for the last two years -- that it's never appropriate for the DOJ to refrain from defending a statute or, at least, that it would be wrong to do so in the DOMA case.

But for those loyal Obama supporters who spent two years defending the administration's DOMA position on this ground:  if they have even a minimal amount of intellectual honestly, shouldn't they now criticize the President's reversal, this new refusal to defend DOMA?   If they really believed what they were saying for the last two years -- that a President is required to defend the constitutionality of all statutes -- then shouldn't they be vocally condemning Obama now for doing exactly that which they insisted he has no power to do?  Of course -- as the torture photo and civilian trial controversies also demonstrated -- one of the joys of partisan fealty and devotion to a leader is that one need not have any actual beliefs or positions:  you get to say whatever you need to say at any given moment to justify the leader's conduct, even if it completely contradicts what you said months or weeks earlier in service of the same objective.  Justifying the leader's behavior is the sole prism through which the entire political world is viewed; one is blissfully liberated from the need to formulate any actual views or principles.

For a sense of the grave injustice and misery which DOMA produces for gay citizens -- and the reason I consider Obama's reversal a genuine cause for praise -- see this email which I received today; I receive multiple emails exactly like this every time I talk or write about this issue.

UPDATE:  I think Andrew Sullivan and others are under-stating the significance of Obama's DOMA decision.  It's true that courts (including the Supreme Court) are still free to find the statute constitutional; it's true that DOMA will still be enforced until a final court ruling; and it's also true that DOMA will still have plenty of competent lawyers vigorously defending its constitutionality (including from Congress).  But the question in these constitutional challenges is whether the Government has a legitimate (or greater) interest in treating groups of citizens differently, and when the U.S. Government is standing up in court and telling judges that there is no such interest, that makes a substantial difference.  That's why, as Jack Balkin documents, many of the most momentous shifts in civil rights law and the law in other areas comes after (and due to) changes in the Government's position; it's not binding on courts, of course, but it's quite influential.

Moreover, the significance extends beyond DOMA.  Perhaps the most consequential aspect of the DOJ's announcement is that it now formally adopts the position that gay people are a "suspect class" for Equal Protection analysis, and laws targeting them thus merit heightened constitutional scrutiny.  That the DOJ now formally adopts what until very recently was a fairly radical legal position will almost certainly change the face of constitutional analysis -- for the better -- as it concerns equal rights for gay Americans.