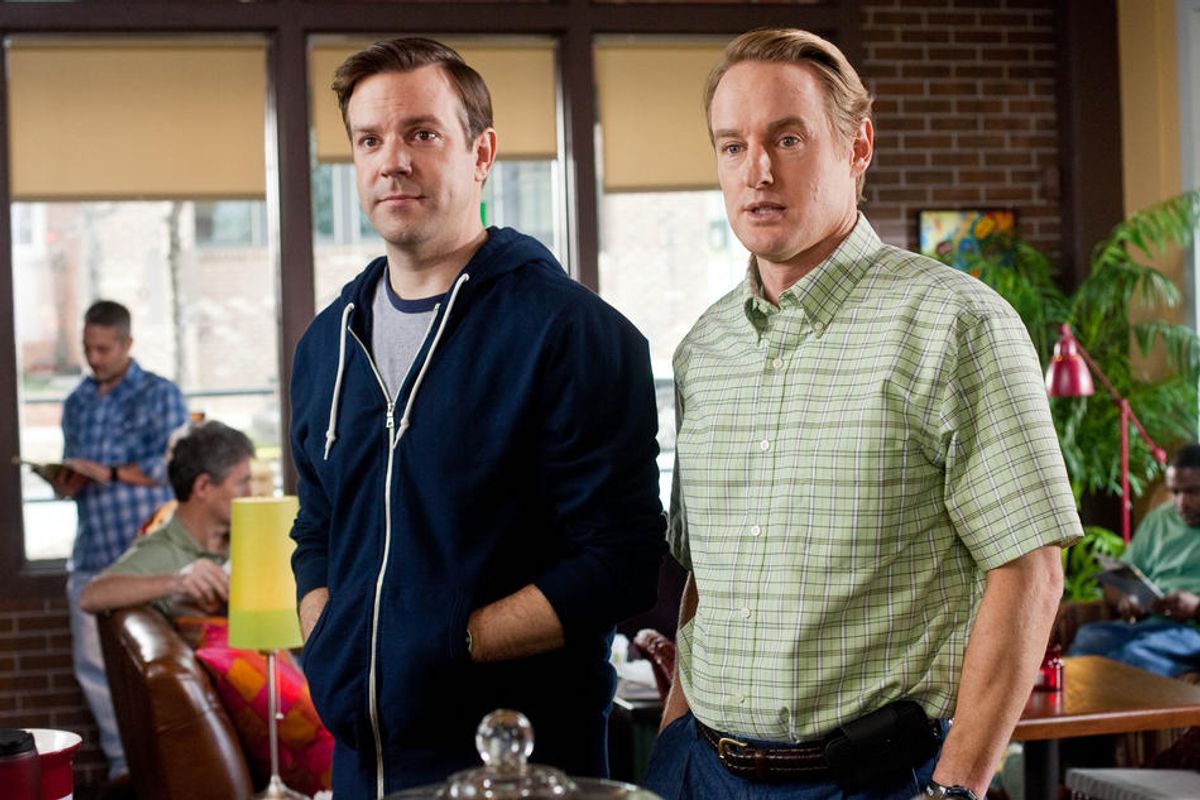 (L-r) JASON SUDEIKIS as Fred and OWEN WILSON as Rick in New Line Cinemaâs comedy âHALL PASS,â a Warner Bros. Pictures release. PHOTOGRAPHS TO BE USED SOLELY FOR ADVERTISING, PROMOTION, PUBLICITY OR REVIEWS OF THIS SPECIFIC MOTION PICTURE AND TO REMAIN THE PROPERTY OF THE STUDIO. NOT FOR SALE OR REDISTRIBUTION (Peter Iovino)
--

Look, there's no point pretending that anything in a movie made by Peter and Bobby Farrelly is likely to surprise you at this point. There will be guys who are not half as cool as they think they are, but are good at heart, not to mention hopelessly juvenile and mesmerized by ass. (Sure, I'm tired of these Peter Pan characters too, ladies -- but it's not like the movies are making them appear in real life.) There will be intermittent explosions of gross-out humor, nervous homophobia and/or homoeroticism, and outrageous gags that go right to the edge of unacceptable misogyny. Not to put too fine a point on it: There will be poop. There will be prison rape. There will be jokes about penis size, with full-on male nudity to match. There will be ugly chicks. And then the whole thing will be redeemed, at least somewhat, in a rising tide of sentimental sweetness that seems simultaneously calculated and heartfelt.

We get all that and more in the Farrellys' new "Hall Pass," which teams up Owen Wilson and Jason Sudeikis as a pair of suburban dads granted a magical week off from the duties and responsibilities of marriage, with unexpected (i.e., entirely predictable) consequences. Now, here's the thing about the Farrellys, a writing-producing-directing duo from Rhode Island who launched a triumphant wave of perma-teen, guy-oriented comedy hits with movies like "Dumb and Dumber" and "There's Something About Mary" in the '90s. (What is it, by the way, with American film comedy and the ordinarily not-so-uproarious New England states?) Arguably, younger innovators and emulators like Judd Apatow and Todd Phillips have passed them by in this century. The whole dude-comedy thing feels just as much like practiced shtick, at this point, as anything Dean Martin and Jerry Lewis ever did. "Hall Pass" even seems a bit like a Farrelly variation on the themes and situations of Phillips' 2003 hit "Old School" (which happened to star Owen Wilson's brother, Luke).

But there is a balance to the Farrellys' comedy -- a balance, let's say, of male self-mockery, social satire and pure vulgarity -- that most imitators cannot manage, and they consistently sympathize with the long-suffering women who get stuck with the ludicrous man-children in their movies. More to the point, they're funny, often savagely so. "Hall Pass" has plenty of misfired gags and cringe-inducing moments, only some of them intentional (as when Wilson's character bungles this pickup line: "Excuse me, are you Irish? Because when I look at you, my penis is doublin'!"). But compared to, say, your average Adam Sandler movie it's a master class in film comedy. Oh, you will laugh. You may not forgive yourself for it easily, but you will laugh. You may well laugh to the point of pee stains in your underthings, and if you think that's gratuitous you have no idea.

Owen Wilson, contemporary American cinema's king of doofusy self-regard (it's a coveted crown), plays Rick, a real estate agent in suburban Providence who favors short-sleeve shirts and Members Only jackets. Rick loves his wife, Maggie (nicely underplayed by Jenna Fischer), and their three kids, and seems only mildly puzzled by the middle-aged guy's dilemma: How did I get here? His best pal Fred is a slightly unctuous insurance salesman, played by Jason Sudeikis right at the outer edge of audience sympathy; Fred is this story's Iago-lite to Rick's befuddled Othello, the schemer who leads the main character astray. In this case that means shamelessly ogling the hot Aussie barista (Nicky Whelan) who serves them iced coffees with two Splendas apiece, rather than committing murder, but a husbandly sin is a husbandly sin.

Exasperated by their husbands' wandering eyes, porn obsessions and sub-sophomoric sex talk, Maggie and Fred's wife, Grace (Christina Applegate, who's built up a nice second-act career as a character actress), decide on a brutal but desperate strategy: the "hall pass," a week-long vacation from marriage when their husbands can discover whether single life is all they imagine it to be. So Rick and Fred hit the sultry streets -- by which I mean Applebee's, at 7 p.m. -- in search of hot local talent, accompanied by their admiring posse. (This includes English comic Stephen Merchant and African-American comic J.B. Smoove playing brothers-in-law, which, like most of the best things in "Hall Pass," falls into the category of "sure, what the hell.")

Of course, like most fairy tales about granted wishes, this is a "be careful what you wish for" scenario. Rick and Fred are completely hopeless at picking up chicks and go from one hapless situation to the next -- I do wish the pot-brownies-on-the-golf-course sequence delivered more than it does -- while Maggie and Grace adjourn to Cape Cod and find themselves surrounded by muscular and willing manflesh. (It's a setup as old as Aristophanes.) And of course on their very last night of freedom, it turns out that the cartoon-sultry Aussie just might have "sex with a married Realtor" near the top of her bucket list, while Fred winds up with two different women in a motel room under circumstances too bewildering (not to mention too disgusting) to synopsize.

There is a vengeful, SUV-vandalizing hipster kid and an aging local legend of ladykiller-ness. (That one is a delightful cameo from Richard Jenkins, who can officially play any character, up to and including Hitler and Mother Teresa.) There's a manufactured crisis and a treacly resolution that brings all the characters smashing together like atoms in a supercollider. You may realize, when it's all over, that Wilson and Sudeikis have handled their ludicrous, caricatured roles with deadpan delicacy and that the whole project has a consistent tone you might call gentle, chaotic self-parody. Or you might just want to tell your friends about the poop jokes and giant dicks.