The potential 2012 hopeful says of the war in Afghanistan: "I don't know" what to do 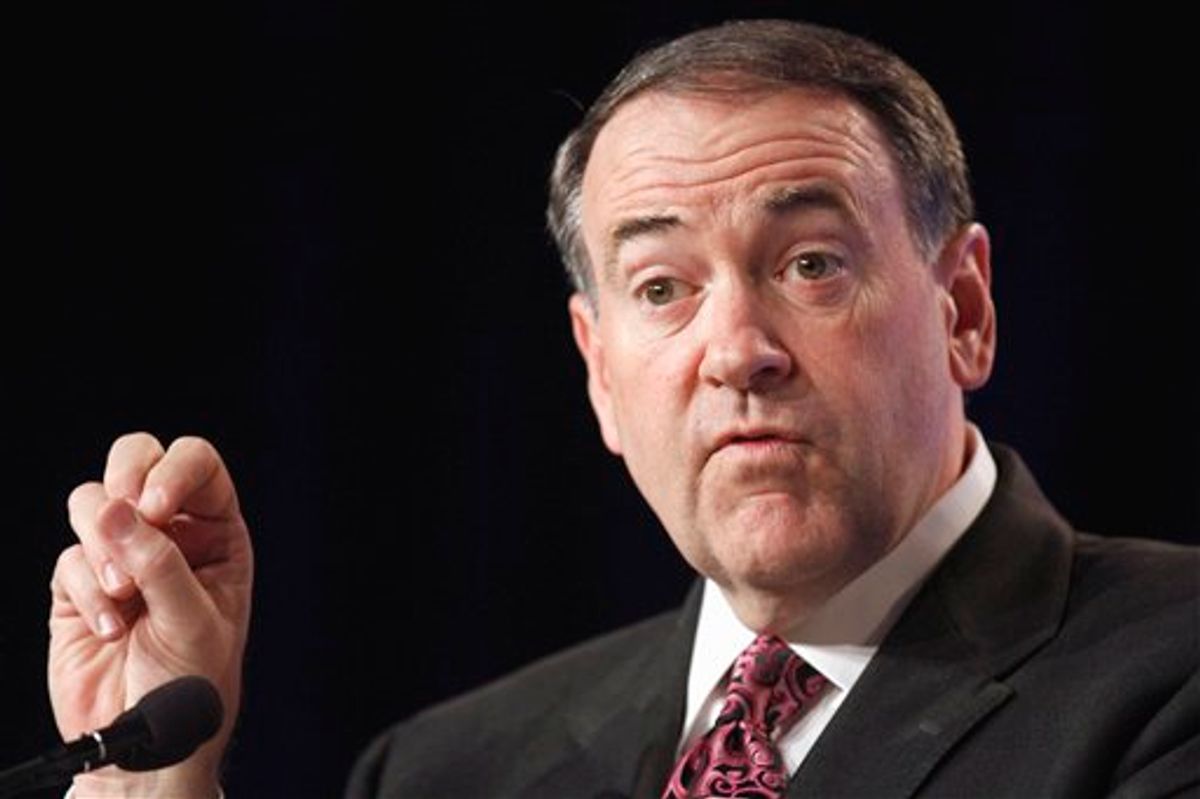 FILE - In this Sept. 17, 2010, file photo, former Arkansas Gov. Mike Huckabee speaks in Washington. The jockeying to find a nominee to challenge President Barack Obama is a crowded, unsettled affair, but one thing's clear: It will be more conservative, to tp bottom, than was the Republican Primary four years ago, and several before that. (AP Photo/Jacquelyn Martin, File) (AP)
--

It's well known that Mike Huckabee is obsessed with Israel and, in his words, "the aggressive interest in bringing Jews from around the world to the homeland." But does the potential 2012 presidential hopeful care about other foreign policy issues at all?

Two recent articles suggest that Huckabee either hasn't given much thought to a couple of major foreign policy issues -- Iraq and Afghanistan -- or is simply bored by them.

First, the Washington Post published a profile in which Huckabee complains about the primary debates back in 2007 when Iraq was perhaps the most high-profile issue before the field:

Don't look for him in the early presidential debates, which begin just over two months from now, for instance. He doesn't have fond memories of standing on those crowded stages during the last campaign, fighting for airtime and answering question after question about Iraq.

"We just rehashed the same stuff, over and over. I was bored with it," Huckabee said. "It was the same tripe, and I found it just incredibly disgusting, and ultimately meaningless."

OK -- he has a point about the debate format, but what's wrong with talking about Iraq, a question that involved billions of dollars and thousands of American lives?

Fast forward to this week, when Huckabee did a roundtable with reporters to promote his new book. The Huffington Post reports that Huckabee expressed doubts about the "end game" in Afghanistan. So what is the former governor's policy prescription? From Huffpo:

"I don't know [what to do next]," Huckabee said at an afternoon talk organized by the Christian Science Monitor. "I don't think any of us know exactly. We are there. The question is, I'm asking people, 'Tell me, what is it we do to say we are done? Help me to understand that because I'm not sure.'"

"My doubts about Afghanistan happen from being there in January 2006," he said earlier. "And when I say my doubts I believe our military is capable of doing whatever they are assigned to do given the resources to do it. But I came away from that experience wondering: What does the end game look like here? I can't see a conclusion."

Read that over a few times -- Huckabee is not really saying anything at all. He's confident in the military's competence, but he's not sure where this whole crazy war is headed. And he doesn't seem to have a position on what the U.S. policy in Afghanistan should be. Isn't that a little odd for a guy who may well be running for president?