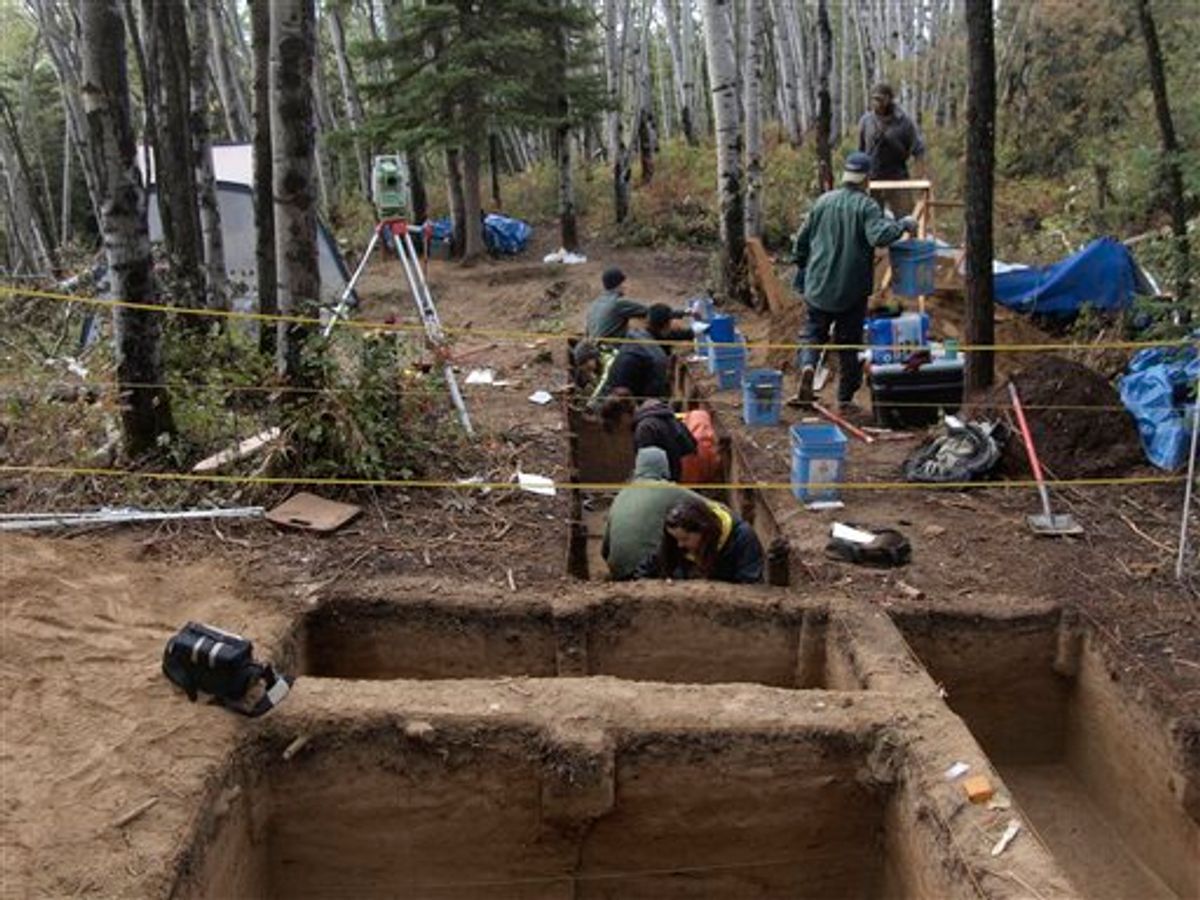 This undated handout photo provided by the journal Science shows a trench connecting both areas of the site in Alaska. Some 11,500 years ago one of America's earliest families laid the remains of a three-year-old child to rest in their home in what is now Alaska. Today archaeologists are learning about the life and times of the early settlers who crossed from Asia to the New World, researchers thank to that burial. (AP Photo/Ben A. Potter, Science) (AP)
--

Some 11,500 years ago one of America's earliest families laid the remains of a 3-year-old child to rest in their home in what is now Alaska. The discovery of that burial is shedding new light on the life and times of the early settlers who crossed from Asia to the New World, researchers report in Friday's edition of the journal Science.

The bones represent the earliest human remains discovered in the Arctic of North America, a "pretty significant find," said Ben A. Potter of the University of Alaska Fairbanks.

While ancient Alaskan residents were known to hunt large game, the newly discovered site shows they also foraged for fish, birds and small mammals, he explained. "Here we know there were young children and females. So, this is a whole piece of the settlement system that we had virtually no record of."

The site of the discovery, Upper Sun River, is in the forest of the Tanana lowlands in central Alaska, Potter and his colleagues report.

Potter said the find, which included evidence of what appeared to be a seasonal house and the cremated remains of the child, "is truly spectacular in all senses of the word."

"Before this find, we knew people were hunting large game like bison or elk with sophisticated weapons, but most of sites we had to study were hunting camps," Potter said.

Now they have the remains of the residence, which they say was occupied in summer, based on the evidence of bones from salmon and immature ground squirrels.

The cremated human bones are the "first evidence for behavior associated with the death of an individual," Potter said. "This was a living, breathing human being that lived and died," he said.

Based on its teeth, the child was about 3 years old, according to archaeologist Joel Irish, also of the University of Alaska Fairbanks.

While the researchers were not able to determine the sex of the child from the bones, Potter said they hope to obtain a DNA sample that might give them the answer.

The child has been named Xaasaa Cheege Ts'eniin (or Upward Sun River Mouth Child) by the local Native community, the Healy Lake Tribe.

In addition to the human and animal bones at the site, the researchers also found stone tools used for cutting.

William Fitzhugh, director of Arctic studies at the Smithsonian's National Museum of Natural History, agreed that "this is definitely a unique and important site."

He said the most interesting aspects were the very early, well-dated home site and its broad range of small animal food remains, stone tools, hearth pit and a possible ritual cremation site, "all with strong associations to Siberia. Indeed, a great documentation of one of America's first families," said Fitzhugh, who was not part of the research team.

While these bones represent the earliest human remains in the U.S. Arctic, there is evidence people had passed through Alaska earlier. Indeed, human DNA has been extracted from dried excrement deposited in caves in Oregon some 14,300 years ago and the well-known Clovis Culture flourished in parts of the United States 13,000 years ago.

The new find adds to knowledge of the pioneering people of Beringia, the region extending from eastern Siberia into Alaska, which was connected by a land-bridge across the Bering Strait thousands of years ago, aiding the movement of people from Asia into North America.

The researchers said the stone artifacts, house structure and the types of animal remains more closely resemble items found at Siberia's Ushki Lake than to anything from the U.S.'s lower 48 states.

While Potter reported that the child probably died before being cremated, Michael Kunz, an archaeologist with the Bureau of Land Management in Fairbanks, suggested another possibility: "I don't think that there is any more evidence that the burned remains of the child indicate a cremation than they indicate that the child may have been cooked and eaten."

The body was found buried in the fire pit, Kunz noted via e-mail, and "the bones that are missing are the bones that have the most flesh on them and would most likely be used for food."

"Cannibalism among humans is not new news," added Kunz, who was not part of Potter's team.

Potter said he disagreed, because it appeared soft tissue remained when the child was burned.

And Irish said the child had been laid out with knees drawn up and hands placed to one side in a relatively peaceful position. Missing bones, he said, could simply have been destroyed by the fire.

Kunz did agree with the researchers that it is a unique find, commenting: "This is also, to my knowledge, the earliest known example of a formal dwelling in Eastern Beringia."

And, he added, "it bolsters evidence from other sites in the Tanana Valley the Paleo-Indians in the region were not just big game hunters, but foraged widely."

The research was funded by the National Science Foundation.