Laurence Fishburne does justice to "Thurgood" 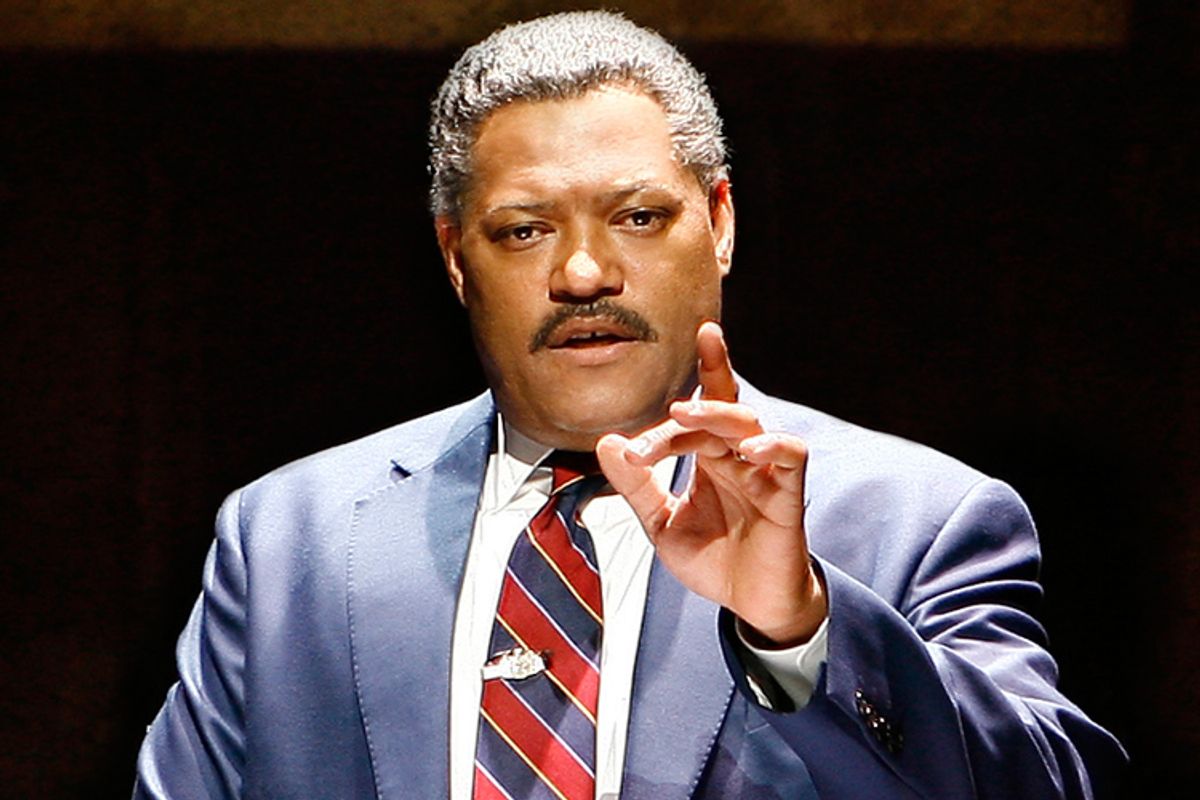 Laurence Fishburne is an actor of great subtlety and power, but you wouldn't always know that from the roles he's been given. He's been typecast in predictable mentor/boss/voice of authority roles since the original "The Matrix," maybe earlier. His work in "Armored," "Predators," "CSI" and the like are facets of the "Voice of Authority" Fishburne -- the rent-earning Fishburne. They remind me that great moment in Albert Brooks' heaven comedy "Defending Your Life" where an angel reveals that people on earth only use 3 to 5 percent of their brains. You sense the full range of Fishburne's gifts in "Boyz N the Hood," "Othello" and the HBO movie "Always Outnumbered," in which he played Walter Moseley's South Central detective Socrates Fortlow. Those aren't  3-to-5 percent roles, but complex leading-man parts that showcase the full range of his gifts.

HBO's "Thurgood" (Thursday 9 p.m./8 Central) is another. This bare-bones adaptation of George Stevens Jr.'s one-man stage production recounts the life of Thurgood Marshall, the influential constitutional lawyer who argued the plaintiff's case in Brown v. Board of Education in 1954, and became the first black Supreme Court justice in 1967. (Stevens Jr. also wrote and directed a 1991 miniseries about the Brown case, starring Sidney Poitier as Marshall.) This production has zero value as cinema and doesn't aspire to have any. It's mainly a videotaped record of the title performance by the 49-year-old Fishburne, who portrays a Marshall on the far side of life, speaking before an audience at his alma mater, Howard University, and holding forth on his pioneering career as lawyer and judge.

What a performance! From the moment Fishburne ambles onstage on a cane, he's got the audience in his hip pocket. He has that don't-give-a-damn confidence that a lot of old, accomplished men have -- that liveliness and jocular wit that says, "I've achieved so much in my life that I am entititled to strut a bit -- and as long as I put you at ease, and show how my achievements are your achievements, too, you won't mind."

Fishburne/Thurgood is a fantastic yarn-spinner. The production runs a little over 100 minutes, but feels longer in a good way. Every few minutes there's a new anecdote, structured by Stevens in a classic setup/details/punch line structure that at times recalls a stand-up comedy routine. There's a marvelous moment early on where Marshall talks about how his father advised him to fight any man who dared call him "nigger," and when it happened to him at a bus stop, he took a swing at the man. The timing of Fishburne's swing is a master class in stage technique. He doesn't pause for the punch; he throws it mid-sentence, never breaking his verbal or physical stride, with a slightly ragged spontaneity -- which makes its effect more real and powerful, less stagey. (And he doesn't punch like a 49-year old man; he punches like a much older man reconnecting with youthful energy.) There are brilliant moments like that all through the performance, moments where Fishburne does subtle things with his voice or body that hint at a vast subtext -- a lawyer might call it a sidebar -- that Thurgood Marshall doesn't have the time or inclination to get into.

Students of Marshall's life and times won't find any new information here, but the personal shadings are crucial because they humanize what might otherwise have been dry textbook details. Stevens and Fishburne find a strong emotional through-line for Marshall's greatest triumphs: the desire to right injustices visited upon Marshall, his family and his people. The play presents Marshall as a man whose greatest asset was his ability to listen to what other smart people have to say and absorb their wisdom. He heeds his parents' advice to protect his dignity at all costs and battle unjust policies wherever possible. When Charles Hamilton Houston, the dean of the Howard University Law School, warns Marshall that he has to be better than any white lawyers if he hopes to win cases in white courtrooms, he takes that lesson to heart -- and he displays a knack for pinpointing the absurdities of unjust laws and highlighting them so that others see their absurdity, too.

One of the highlights of "Thurgood" is the hero's account of Murray v. Pearson, which sued the University of Maryland for denying entrance to a prospective black student, Donald Goines Murray, and advising him to attend an inferior school in-state or enroll in an out-of-state black institution. Marshall and his co-counsel, Houston, cleverly argued not that it was morally wrong to refuse entrance to a black student, but that in failing to provide Murray with a comparably strong, "separate but equal" school that would give him the tools he needed to practice law in Maryland, both the school and the state were in violation of the 14th Amendment to the U.S. Constitution. (The judge agreed with the plaintiff's reasoning and ordered the university to admit Murray.) In essence, Marshall and Houston called out the state of Maryland, and the United States of America, as lazy hypocrites, and said, "If you really mean separate but equal, we'll insist that you obey the letter and spirit of the law." "What's at stake here," Marshall argued in court, "is more than the rights of my client. It's the moral commitment stated in our country's creed."

Fishburne's narration of the case is brilliant. Watch how he slowly evolves from academic interest to sporting excitement and finally to something like an avenger's righteous euphoria, capping it with a streetfighter's glee at having bested a bigger opponent. He and Houston won a seemingly impossible battle by targeting their energies wisely; they knocked the keystone out of the arch and made the whole thing collapse. The production is filled with lines like, "One man can make a difference" -- lines that the cynical might scoff at in different context. Here, you believe them.  You have to. It's Thurgood Marshall talking.