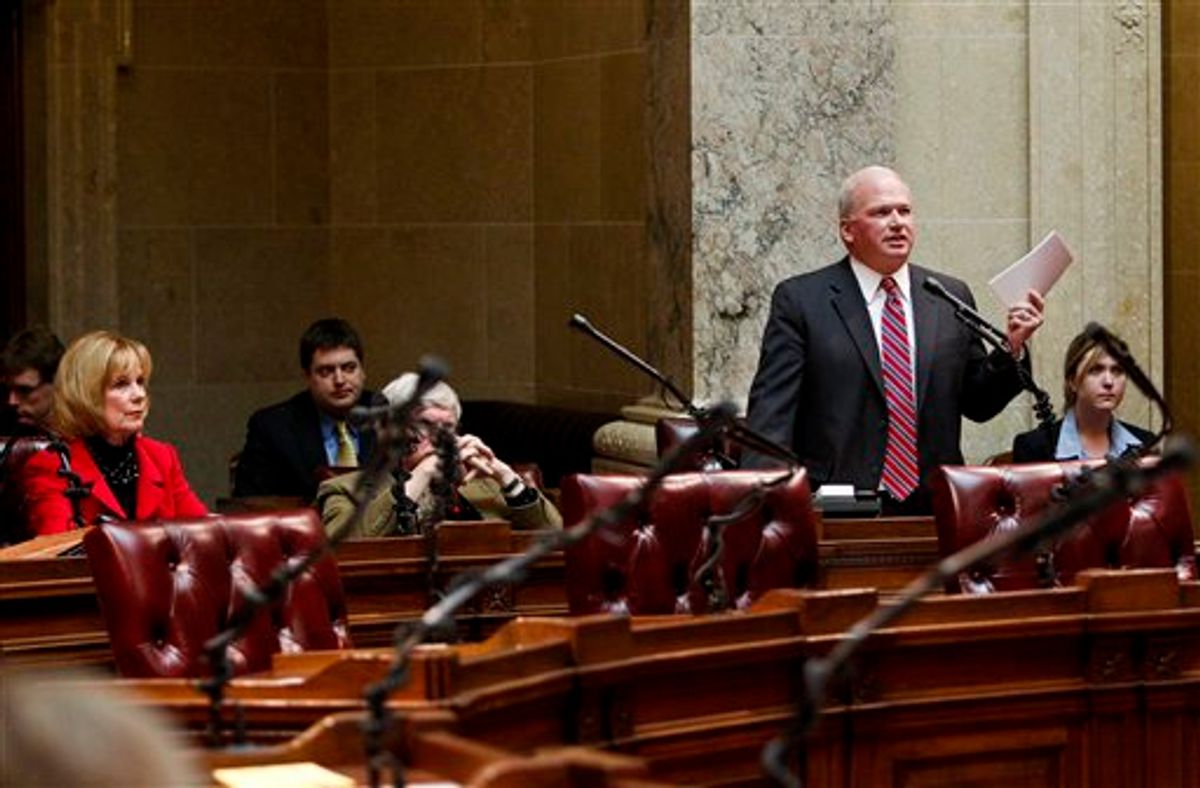 Wisconsin Majority Leader Scott Fitzgerald, standing right, R-Juneau, talks about the rules in the senate handbook during debate on floor at the state Capitol in Madison, Wis., Wednesday, Feb. 23, 2011. Fourteen democratic Senators are in undisclosed locations effectively stalling the governor's budget proposal. Opponents to the governor's bill to eliminate collective bargaining rights for many state workers on their ninth day of protests at the Capitol. (AP Photo/Andy Manis) (AP)
--

Wisconsin state troopers were dispatched Thursday to try to find at least one of the 14 Senate Democrats who have been on the run for eight days to delay a vote on Republican Gov. Scott Walker's proposal to strip collective bargaining rights from nearly all public employees.

Meanwhile, the state Assembly appeared close to voting on the union rights bill after two days of filibustering the measure with a blizzard of amendments. Democrats reached an early morning deal after 43 hours of debate to limit the number of remaining amendments and time spent on each.

Troopers went to multiple homes Thursday morning hoping to find at least one of the 14 Democrats, some of whom were rumored to have made short trips home to pick up clothes and other necessities before again fleeing the state. But they came up empty handed, Senate Sergeant at Arms Ted Blazel said.

"Every night we hear about some that are coming back home," said Republican Senate Majority Leader Scott Fitzgerald, who hoped sending the move to send the troopers would pressure Democrats to return.

But Democratic Sen. Jon Erpenbach, who was in the Chicago area, said all 14 senators remained outside of Wisconsin and would not return until Walker was willing to compromise.

Walker spokesman Cullen Werwie issued a statement praising the Assembly for nearing a vote and renewing his call for Senate Democrats to come back.

Thousands of people have protested the bill for nine straight days, with hundreds spending the night on the Capitol's hard marble floor as the debate was broadcast on monitors in the rotunda. Many still were sleeping when the deal to only debate 38 more amendments, for no more than 10 minutes each, was announced shortly after 6 a.m. The timing of the agreement means the vote could come as soon as noon Thursday.

"We will strongly make our points, but understand you are limiting the voice of the public as you do this," said Democratic state Rep. Mark Pocan of Madison. "You can't dictate democracy. You are limiting the people's voice with this agreement this morning."

Democrats, who are in the minority, don't have the votes to stop the bill once the vote occurs.

Passage of the bill in the Assembly would be a major victory for Republicans and Walker, but the measure still must clear the Senate. Democrats there left town last week rather than vote on the bill, which has stymied efforts there to take it up.

The battle over labor rights has been heating up across the country, as new Republican majorities tackle budget woes in several states. The GOP efforts have sparked huge protests from unions and their supporters and led Democrats in Wisconsin and Indiana to flee their states to block measures.

In Ohio, Republican Senate President Tom Niehaus denied protests have dented the GOP's resolve, saying lawmakers decided to make the change after listening to hours of testimony. He said he still believes the bill's core purpose -- reining in spending by allowing governments more flexibility in dealing with their workers -- is intact.

"We can't grow Ohio's economy by destroying jobs and attacking the middle class," Cafaro said. "Public employees in Ohio didn't cause our budget problems and they shouldn't be blamed for something that's not their fault."

Wisconsin Democrats have echoed Cafaro for days, but Walker has refused to waver.

Walker reiterated Wednesday that public workers must make concessions to avoid thousands of government layoffs as the state grapples with a $137 million shortfall in its current budget and a projected $3.6 billion hole in the next two-year budget.

The marathon session in the Assembly was grand political theater, with exhausted lawmakers limping around the chamber, rubbing their eyes and yawning as Wednesday night dragged on.

Around midnight, Rep. Dean Kaufert, R-Neenah, accused Democrats of putting on a show for the protesters. Democrats leapt up and started shouting.

"I'm sorry if democracy is a little inconvenient and you had to stay up two nights in a row," Pocan said. "Is this inconvenient? Hell, yeah! It's inconvenient. But we're going to be heard!"

The Ohio and Wisconsin bills both would strip public workers at all levels of their right to collectively bargain benefits, sick time, vacations and other work conditions. Wisconsin's measure exempts local police, firefighters and the State Patrol and still lets workers collectively bargain their wages as long as they are below inflation. It also would require public workers to pay more toward their pensions and health insurance. Ohio's bill, until Wednesday, would have barred negotiations on wages.

Ohio's measure sits in a Senate committee. No vote has been scheduled on the plan, but thousands of protesters have gathered at the Statehouse to demonstrate, just as in Wisconsin.

In Indiana, Democrats successfully killed a Republican bill that would have prohibited union membership from being a condition of employment by leaving the state on Tuesday. They remained in Illinois in hopes of derailing other parts of Republican Gov. Mitch Daniels' agenda, including restrictions on teacher collective bargaining.

And in Oklahoma, a Republican-controlled state House committee on Wednesday narrowly approved legislation to repeal collective bargaining rights for municipal workers in that state's 13 largest cities.

The Assembly deal was announced shortly after 6 a.m. while the troopers were sent after the Democrats at 7 a.m.