Who really made the Oscar-nominated "Waste Land"? 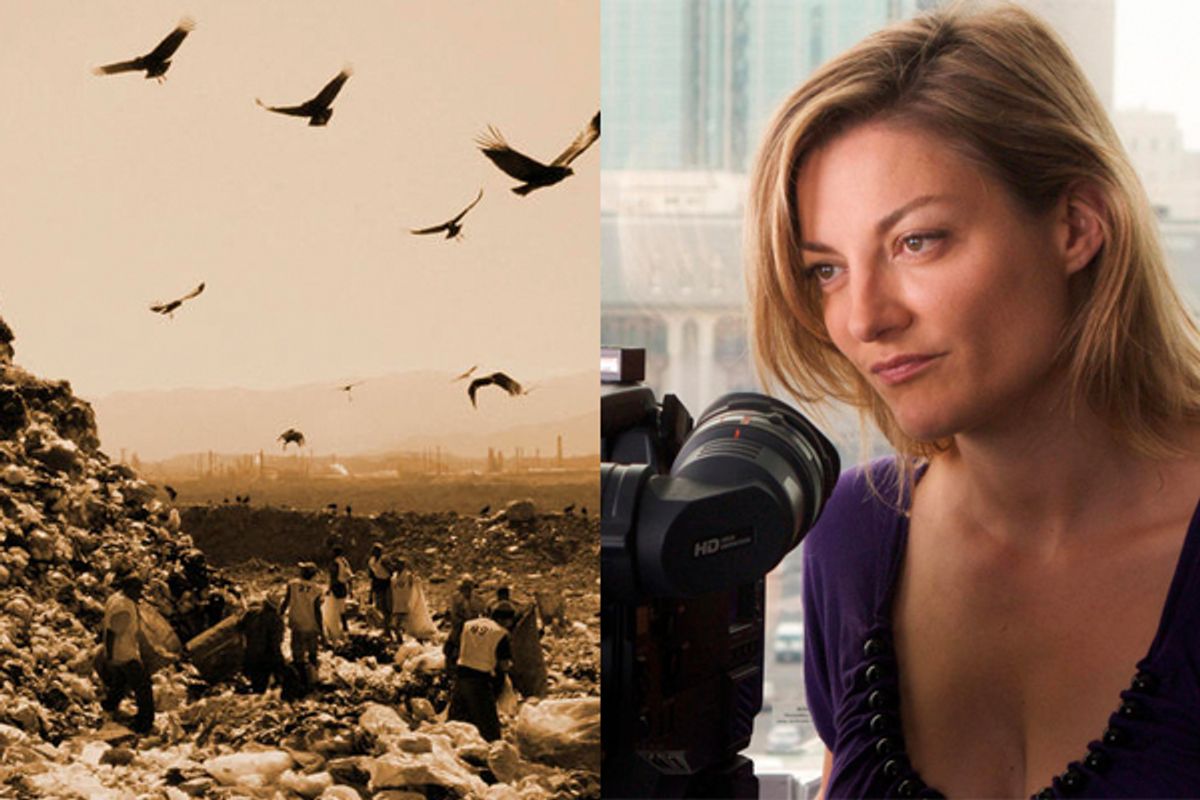 Lucy Walker and a still from "Waste Land"
--

This article has been updated below.

"Waste Land" is a  vibrant and exciting documentary about the unlikely collaboration between Vik Muniz, a prominent Brazilian-born artist who now lives and works in New York, and the garbage-pickers, or "catadores," at the world's largest dump, outside Rio de Janeiro. After winning audience awards at Sundance and numerous other film festivals, "Waste Land" was nominated for best documentary in this year's Oscar race, and is rated by some industry insiders as a dark horse to win the big prize on Sunday night. (The financial-collapse doc "Inside Job" is undoubtedly the favorite, but "Waste Land" is without question a sunnier, more up-with-people kind of movie.)

But from the beginning, the compelling human and artistic drama of "Waste Land" has been subtly and slightly undermined by a stream of whispers and rumors regarding the participation of its principal credited director, Lucy Walker. Four days before the big prize is to be awarded, it appears that the creators of the film don't agree about who should get credit for what. They also don't seem to agree about what the ambiguous term "director" really means. Must the director of a film be present when all or most of the footage was shot? Is the director the person who supervises final cut in the editing room? Or is the word little more than a term of art, to be applied to the most media-friendly spokesperson for the whole enterprise?

One reviewer described "Waste Land" as "the 'Slumdog Millionaire' of documentaries," which is a striking comparison on several levels. Among other things, that Oscar-winning film also featured a troubled relationship between a first-world director and his third-world collaborators. "Slumdog" was almost universally considered the work of well-known British filmmaker Danny Boyle, and his Indian co-director, Loveleen Tandan, was virtually ignored.

A charismatic and articulate Englishwoman who is well connected in the fields of film, art and fashion on both sides of the Atlantic, Walker has been the highly visible public face of "Waste Land." She famously appeared at the New York premiere in a plastic trash bag (which she joked was "by Vera Wang"), although she has vowed to wear more conventional couture on Oscar night. Her Brazilian co-directors, João Jardim and Karen Harley -- who, at least by Jardim's account, shot the vast majority of the film -- have virtually never been mentioned.

Arguably, that's the fault of the North American entertainment media, which is always more eager to focus on photogenic personalities rather than complicated production histories. But at least some people have quietly suggested -- in multiple off-the-record conversations, among other venues -- that Walker has disingenuously presented herself as the sole or principal author of "Waste Land," when the truth is somewhat different.

An unremarkable Oscar-season interview with Walker that ran on indieWIRE last week occasioned some startling anonymous comments: "It sounds that Lucy Walker is taking a lot of credit for this film. I have the feeling Waste Land is more a Joao Jardin [sic] and Karen Harley film than hers," read one. Wrote someone else: "Lucy dear, you should tell the truth. Can you imagine how embarrassing it will be for you when someone decides to fact check your whereabouts while the movie was actually being made?"

Now, we have no way of being sure that all the comments on the indieWIRE article weren't left by the same disgruntled person. Background conversations with several people who have worked with Walker on previous films suggest that she can be a powerful and abrasive personality who sometimes rubs people the wrong way -- which is not remotely unusual for a film director. Furthermore, it's entirely likely that Walker is the object of the pernicious film-industry sexism that continues to hinder the careers of ambitious and successful women. But the persistent rumors that she did not direct much of "Waste Land," at least as most people understand that word, go beyond issues of personality.

In an interview with the Brazilian newspaper Estadão, co-director João Jardim said that Walker spent about 10 days filming in Jardim Gramacho, the massive landfill near Rio, before leaving to work on another project (presumably her documentary "Countdown to Zero," made during the same period). "So I took the footage and directed about 60 percent of the scenes that are seen on screen," Jardim continued, with Karen Harley, the other credited co-director, making most of the remainder. "I am an author of a work that has multiple authors." Jardim made clear that after the shoot was over, Walker supervised the final editing of the material back in the United States. "She had final cut of the film, and this is fundamental," he told Estadão.

Angus Aynsley, the principal producer of "Waste Land," does not dispute that Walker was not present for significant portions of the shoot, but describes the whole subject as a non-issue. "We have Lucy Walker as our director and two credited co-directors, and all of them made portions of the film," he told me in a phone interview. "There are other people who may have directed portions of the film, in terms of operating cameras. You could say that I directed bits of it, and that Gabriela Weeks, our wonderful assistant director, made bits of it."

As for Jardim's claim that he shot 60 percent of the film, Aynsley says, "I'm not even sure how you would come up with that. I think that's stretching it. Let me say that João was hired by me, with Lucy's help, and he shot some great bits of the film. This is a multi-directorial effort, and I feel really proud of that. João should feel proud of that, and I know Karen Harley feels proud of it."

Aynsley correctly notes that the question of what a director is and does becomes pretty murky in the documentary world, where material is often assembled from many sources over a long period of time. "Without naming any names," he says, "there are many filmmakers who would use what they might call field producers to shoot and accumulate material, with or without the director's presence."

That may be the best way of understanding what happened in "Waste Land," since no matter how much or how little time Walker spent in Brazil, no one disputes that she helped conceive the project at its inception, and was later in charge of creating a narrative from the material. "As to the definition of a director, I don't really want to try to answer that question," Aynsley says. "But in terms of a documentary, the making of the story is really the editing, the crafting out of a story from 135 to 150 hours of material, in our case. And in terms of the story, this is a film directed by Lucy Walker. In terms of how the story structure works, it fits 100 percent with what she has done in her other films." (In addition to "Countdown to Zero," those include the earlier documentaries "Blindsight" and "Devil's Playground.")

[UPDATE:] Aynsley made clear that Walker was involved in developing the original idea for the film, which grew out of discussions between the two of them, Vik Muniz and other producers and collaborators. This is consistent with what Walker has said about the genesis of the project, and other people involved support this. There is no official dispute -- over credits or anything else -- between her, Jardim and Harley. Many observers have quietly suggested, however, that the term "director" has been stretched to its outer limits in this case, while Walker and others strenuously disagree. [end UPDATE]

When I e-mailed Walker and asked about Jardim's contention that he and Karen Harley had directed most of the film, she wrote back: "These claims are not accurate nor is there confusion nor anything unconventional, success has many lovely fathers and mothers and I love the amazing people who worked so brilliantly on and in the film." Then she went on to imply, perhaps, that I was pursuing a private agenda: "I see that you are Facebook friends with João Jardim, which does not surprise me, in fact I figured as much so I went to Facebook and sure enough there he was listed as one of your 272 friends."

I have never met Jardim, and had never heard of him before beginning work on this story. I used Facebook as a means to contact him in Brazil and set up a Skype conversation, during which Jardim said that he was about to fly to Los Angeles for the Oscars and was not eager to comment further about his work on "Waste Land." Overall, the film was "a really good experience," he said. "I am completely happy with what I did." He couldn't tell me much about Lucy Walker, he added, since he'd only met her once and never worked with her directly.