The "Two and a Half Men" star delivers a shocking radio rant. Has the unstoppable actor finally gone too far? 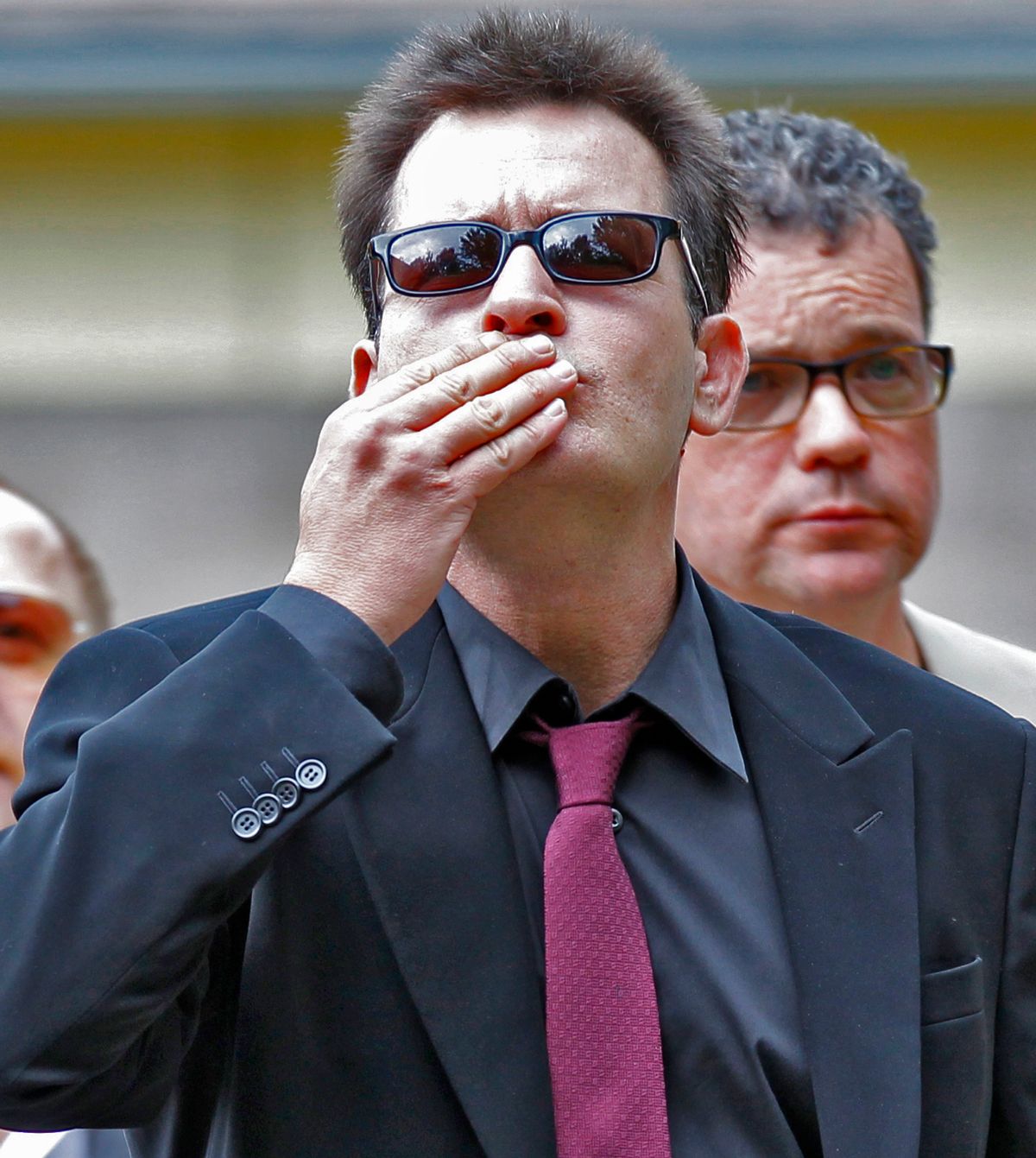 Charlie Sheen gestures with a victory sign as he arrives at the Pitkin County Courthouse in Aspen, Colo., on Monday, Aug 2, 2010, for a hearing in his domestic abuse case. (AP Photo/Ed Andrieski (Ed Andrieski)
--

Until this week, Sheen was the Rasputin of Hollywood, a man whose every potentially career-killing setback only seemed to make him stronger. Domestic abuse allegations?  Rumors of suitcases full of blow?  Mysterious hospitalizations? Sheen bore them all with an indestructible, Tony Montana-like fury, continuing to plow through his day job as the star of "Two and a Half Men" before grudgingly agreeing to a network-appeasing brief stint in rehab.

But in recent days, his behavior has become increasingly erratic -- and erratic on the Charlie Sheen scale is like erratic on the thermonuclear reactor meltdown scale. Earlier this month, he was mouthing off on Dan Patrick's radio show, venting his frustration about his conflicts with his show's creator Chuck Lorre and eagerness to get back to work, understatedly referring to "how insane my life appears at times," and advising Lindsay Lohan to "work on your impulse control ... Just try and think things through a little bit before you do them." And having Charlie Sheen tell you to work on your impulse control is like having BP tell you to work on your environmentalism.

All those shenanigans, however, were just a prelude to the really big show that the Sheen Entertainment Complex rolled out this week. On Thursday, a former lady friend, adult actress Lindsay Wager, claimed to Radar that Sheen's firm work ethic included a commitment to not do any crack for 12 hours before appearing on the set of his sitcom. And TMZ revealed that Sheen's alleged new girlfriend Natalie Kenly was a Cali Chronic X Magazine cover girl whom the gossip site referred to as a "marijuana bikini model." If your day includes the phrases "12 hour crack rule" and "marijuana bikini model," odds are good your name is Charlie Sheen.

But the day's real kicker, appropriately, came from Sheen himself. In a stunningly bananas -- and highly animated -- interview for "The Alex Jones Show," Sheen raged at Chuck Lorre, calling him a "clown," and saying, "I embarrassed him in front of his children and the world by healing at a pace that this un-evolved mind cannot process. I've spent, I think, close to the last decade, I don’t know, effortlessly and magically converting your tin can into pure gold. And the gratitude I get is this charlatan chose [sic] not to do his job, which is to write." Publicly insulting your boss -- especially when he's responsible for your multimillion dollar paycheck – rarely a brilliant strategy.

It didn't end there, though. He went on to refer to the women with whom he consorts as "these turds, these … losers," saying, "There’s no reason to then bring them back into the fold because I have real fame, they have nothing. They have zero." He called Barack Obama "B.O." and made, at one point, a reference to "Vatican assassin warlocks." And, regarding his rehabilitation, he said, "I have a disease? Bulls—. I cured it … with my mind … I can’t use the word sober because that's a term from those people, and I have cleansed myself. I have closed my eyes and in a nanosecond I cured myself from this ridiculous … It's just the work of sissies. The only thing I'm addicted to right now is winning. This bootleg cult arrogantly referred to as AA now supports a 5 percent success rate. My success rate is 100 percent. Do the math!"

Taking him up on his offer, over at "Two and a Half Men," Chuck Lorre and CBS swiftly set about doing some math of their own, shutting down production of the show. The inevitable statement went out late Thursday that "Based on the totality of Charlie Sheen's statements, conduct and condition, CBS and Warner Bros. Television have decided to discontinue production of 'Two and a Half Men' for the remainder of the season." The Hollywood Reporter is now saying additionally that Sheen will not be paid for his remaining episodes.

This move prompted Sheen to expand upon his talking points to TMZ, telling them, "I violently hate Chaim Levine. He's a stupid, stupid little man and a pussy punk that I'd never want to be like. That's me being polite." (Lorre was born Charles Levine – the "Chaim" appears to one of Sheen's subtle, anti-Semitic witticisms.) He then penned an open letter to "Chaim," calling him a "contaminated little maggot" and wishing him "nothing but pain in his silly travels." And that, in case you're wondering, is what a "100 percent success rate" -- or a typical Thursday -- looks like in Charlie Sheen Land.

The Sheen train wreck has been a sad spectacle for a long time now, one that intimately affects the careers of an entire television production and the lives of Sheen's young children. And based on his indefatigable commitment to showing up for his job and his outrage at losing it now, it would appear that that reason to get up in the morning and pull it together has been an essential part of his existence for the better part of the last decade. What happens now to a guy whose motto is "Stay away from the crack -- unless you can manage it socially"?  Maybe he'll get a new TV series before the end of the day, or maybe he'll face a considerably harsher fate. Either way, the spectacle of a man going so wildly, unstoppably out of control, burning bridges with such enthusiastic abandon, looks unlikely to abate any time soon. He's a nightmare, he's a disaster, and his incoherent rants render him increasingly tragic. But there's no denying that somewhere along the way, the mediocre star of one of television's least entertaining shows has become the most dangerous man in comedy.