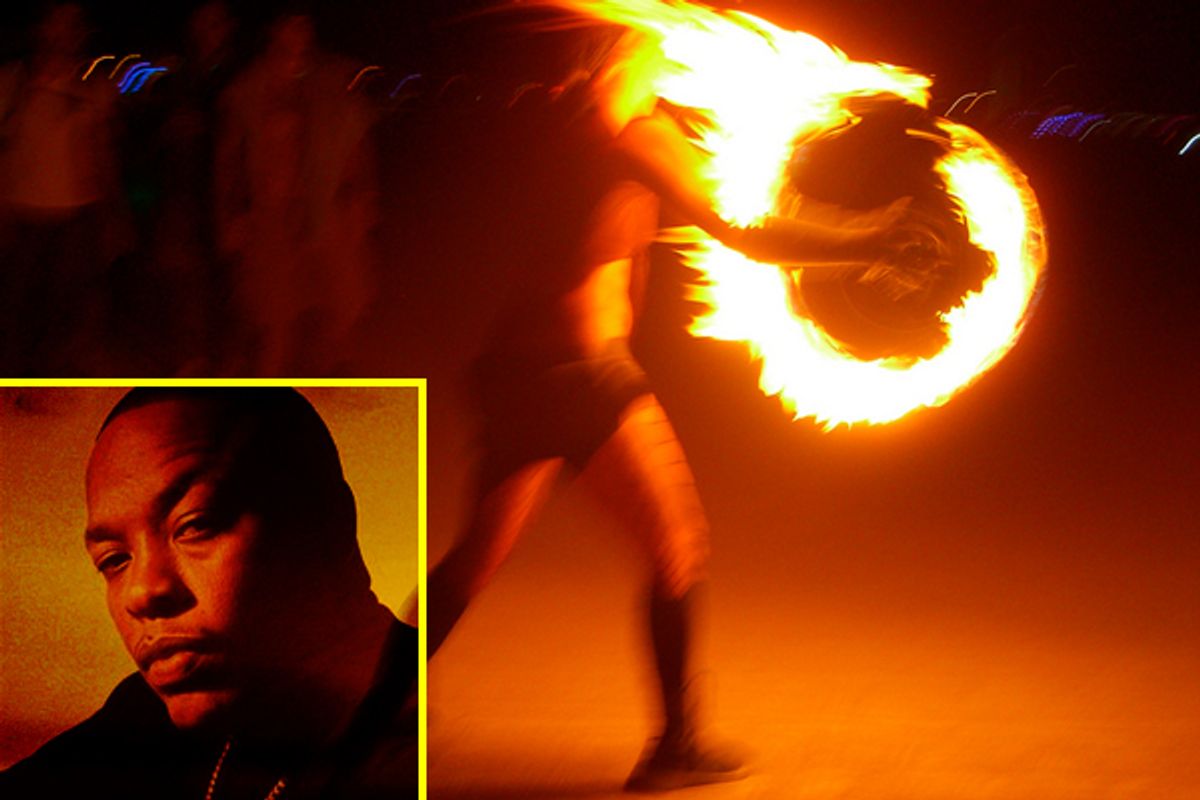 Dr. Dre hanging out with some Burners.
--

Dr. Dre may be a lot of things, but a hippie he is not. According to a site called "Dr. Dre Started Burning Man," the hip-hop producer allegedly wrote a letter to his girlfriend (now wife) Nicole Threatt about a funny little group of people he happened upon in the Nevada desert while scouting locations for a 2Pac video. What follows is a narrative not unlike that of the first American settlers dealings with the Native Americans. (Spelling was not changed from original document):

Hopefully you doing well and you realized you need to quit fuckin with Sedale and come home to your Doctor. I will take care of you baby girl.

I’m in Nevada with Hype lookin at spots for this new video we are shooting for that single I told you pac is going to be on once he is out, called California love. We met a bunch of crazy, naked motherfuckers in the desert today, they were putting up some type of giant wood man. I guess they have a big party out here for a bunch of days. I asked them how much they pay, they said "nothing". I was like no money? Someone should get behind this shit and make some loot of these fools cause they said there will at least be 5,000 people. I think I will have my office look into it, just to see if there is easy money to be had here. I’m bout to pass out girl, wish I was up in that ass. See you back in L.A.

Now, there is no proof that this letter is from Dr. Dre and not just some hoax. Burning Man dates back to 1986, when it was held in San Francisco, though it is true that after 1995, ticket prices went up drastically. But after some industrious Reddit searches, it looks like Dre has nothing to do with the business of Black Rock City LLC, the group behind Burning Man.

Still, just because Dr. Dre isn't behind Burning Man's rise in commodity culture doesn't mean the letter is necessarily false. We're hoping it's true, if only because seven of the 10 principles of Burners (radical self-reliance, radical self-expression, communal effort, civic responsibility, leaving no trace, participation and immediacy) seem like they'd be right up the doctor's alley.