The Easy-Bake Oven loses its soul

The federal ban on incandescent light bulbs won't doom the bulb-powered toy for good. But it will hurt its spirit 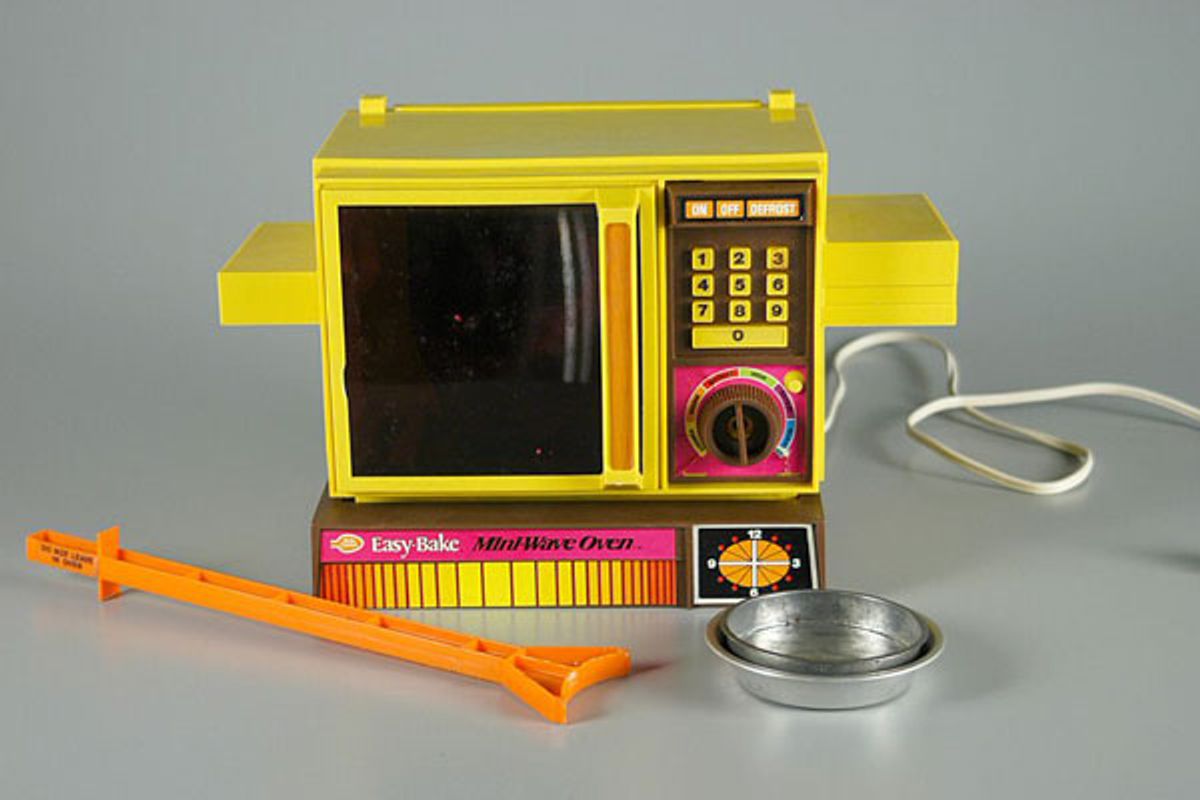 First things first: Rumors of the death of the Easy-Bake Oven are greatly exaggerated. Rumbling through the Internets yesterday were worries that the federal ban on incandescent light bulbs, due to kick in next year, meant that everyone's favorite bulb-powered childhood burn hazard was doomed. Happily, Hasbro announced that the Easy-Bake Oven would be reborn, all Phoenix-like, as the Easy-Bake Ultimate Oven. Only this time it's going to be fired with some zippy little heating element, which means that some kid somewhere is going to be very unhappy when his parents rip the thing apart insisting that they can change the bulb themselves.

But is all truly saved? Surely the phase-out of incandescent bulbs is good for the world -- I mean, that a 100-watt bulb was so inefficient at turning energy into light that it could cook a cake as a byproduct is sort of its own argument against itself. Still, I can't help feeling a little something may be lost with the change.

Rereading Sara Breselor's fascinating piece last year in Salon about the psychology of why we love the toy, I was struck by how much the Easy-Bake's charms are found in the idea that it allowed children to combine their imaginary world with the reality of making food that can actually be eaten. In that story, a chef, a clinical psychologist and a curator of a toy museum all agreed on that point, and I don't think that will change.

But let's face it: Toys are not just for kids. As I've spent time playing with my girlfriend's crazy-adorable niece (Hi, Peanut!), I find that much of the joy of a good toy is in adults' eyes -- watching this tiny person do tiny person things, almost but not quite like how a grown person would do them. We watch them become engrossed, watch them explore the world of their imagination. We watch them stand or sit or tumble before us, but know that, in that moment, where they really are is in their fantasy. It's getting a peek at that fantasy that draws me in, that sense of expansive creativity, of possibility that lives in children.

With the Easy-Bake Oven, that fantasy has launched kids into adulthood, and even the careers of award-winning chefs. The fact that behind all that is a regular old repurposed light bulb is kind of magical. The humdrum light bulb is a connection to the real world, which in turn makes the fantasy feel more fantastical -- there's a wonderful tension between something that's so fake and so real at the same time. Swap out that $1.50, screw-it-in-yourself bulb for the new Easy-Bake Ultimate Oven's supercalifragilistic proprietary heating element and that fragile tension between fantasy and appliance gets thrown a little out of kilter. Now it's just a box that ... does something.

Sure, maybe I'm overthinking this. I'm sure generations of kids will grow up with happy memories of the first time they made something to eat in their Easy-Bake Ultimate Oven. (They might not even grow up realizing how awful that name is.) And their parents will look on, just as happy to see their kids get excited as they are to have them not be screaming and running around the house. But I wonder how the good Mr. Howes would feel about this. Ronald Howes died almost a year ago to the day, at 83. But half a century before that, he once walked past a street vendor keeping his food warm under hot lights. And with that thought, with that bulb going off in his head, he drew up the original Easy-Bake Oven.