Protesters hit by hail of gunfire in Libya march

While Gadhafi calls on his supporters to defend the country, militias again violently attack protesters 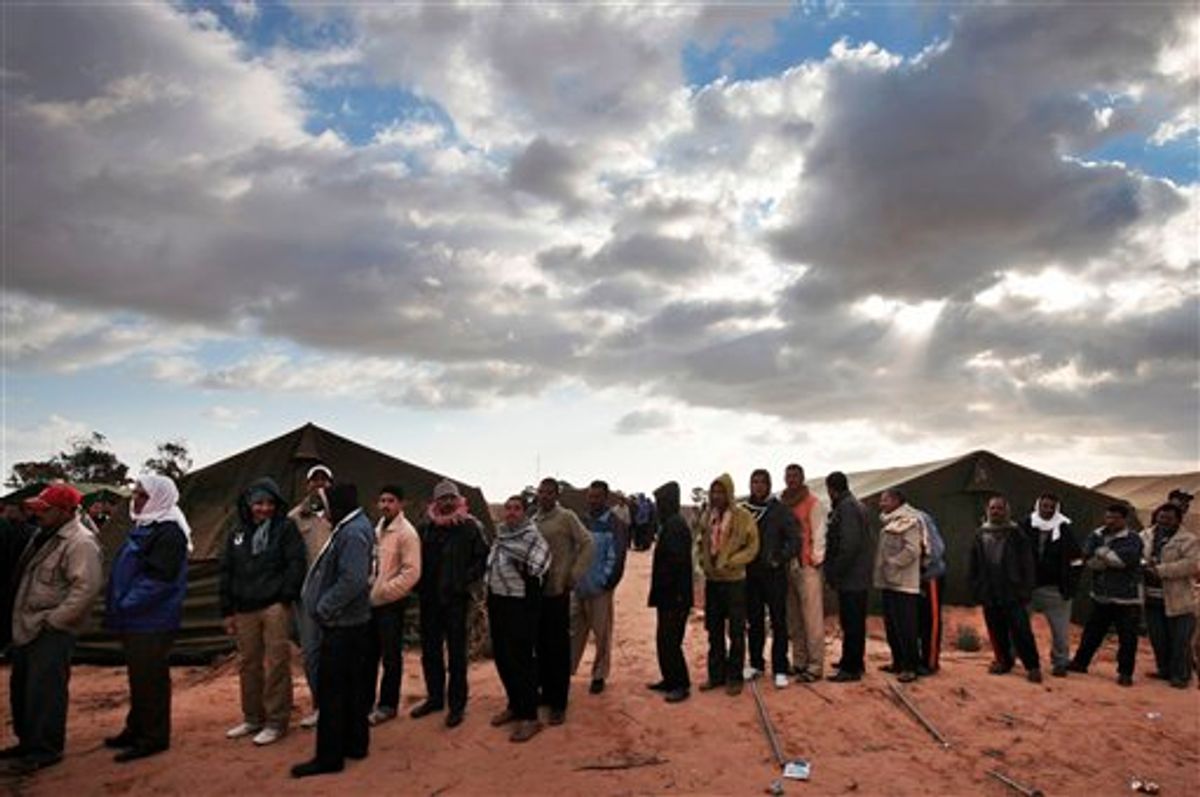 Egyptians, who used to work in Libya, and fled the unrest in the country, wait for their breakfast in a makeshift refugee camp set up by the Tunisian army, at the Tunisia-Libyan border, in Ras Ajdir, Tunisia, Friday, Feb. 25, 2011. (AP Photo/Lefteris Pitarakis) (AP)
--

Militias loyal to Moammar Gadhafi opened fire Friday on protesters streaming out of mosques and marching across the Libyan capital to demand the regime's ouster, witnesses said, reporting multiple deaths. In rebellious cities in the east, tens of thousands held rallies in support of the first Tripoli protests in days.

Protesters described coming under a hail of bullets as they tried to march from several districts around the city toward Tripoli's central Green Square. One man among a crowd of thousands said gunmen on rooftops and in the streets opened fire with automatic weapons and even an anti-aircraft gun.

"In the first wave of fire, seven people within 10 meters (yards) of me were killed. Many people were shot in the head," the man, who was marching from Tripoli's eastern Tajoura district, told The Associated Press. "It was really like we are dogs."

"We can't see where it is coming from," another protester from Tajoura said of the gunfire. "They don't want to stop." He said a man next to him was shot in the neck.

Militiamen opened fire on other marches in the nearby Souq al-Jomaa and Fashloum districts, where witnesses reported four killed. The reports could not be immediately confirmed.

In the evening, Gadhafi appeared before a crowd over more than 1,000 supporters massed in Green Square and called on them to fight back against protesters and "defend the nation."

"Retaliate against them, retaliate against them," Gadhafi said, speaking by microphone from the ramparts of the Red Castle, a Crusader fort overlooking the square. Wearing a fur cap and sunglasses, he shook his fist in the air, telling the crowd, "Dance, sing and prepare. Prepare to defend Libya, to defend the oil, dignity and independence."

He warned, "At the suitable time we will open the arms depot so all Libyans and tribes become armed, so that Libya becomes red with fire." The crowd waved pictures of the leader and green flags as he said, "I am in the middle of the people in the Green Square. ... This is the people that loves Moammar Gadhafi. If the people of Libya and the Arabs and Africans don't love Moammar Gadhafi then Moammar Gadhafi does not deserve to live."

Friday's marches were the first significant protests by regime opponents in the capital since early this week, when militiamen launched a bloody crackdown on protesters that left dozens dead. In the morning and night before, SMS messages were sent around urging, "Let us make this Friday the Friday of liberation," residents said. The residents and witnesses all spoke on condition of anonymity for fear of retaliation.

Tripoli, home to about a third of Libya's population of 6 million, is the center of the eroding territory that Gadhafi still controls. The uprising that began Feb. 15 has swept over nearly the entire eastern half of the country, breaking cities there out of his regime's hold.

Even in the pocket of northwestern Libya around Tripoli, several cities have also fallen into the hands of the rebellion. Militiamen and pro-Gadhafi troops were repelled Thursday when they launched attacks trying to take back opposition-held territory in Zawiya and Misrata, near the capital, in fighting that killed at least 30 people.

Support for Gadhafi continued to fray within a regime where he long commanded unquestioned loyalty.

Libya's delegation to the United Nations in Geneva announced Friday it was defecting to the opposition -- and it was given a standing ovation at a gathering of the U.N. Human Rights Council. They join a string of Libyan ambassadors and diplomats around the world who abandoned the regime, as have the justice and interior ministers at home, and one of Gadhafi's cousins and closest aides, Ahmed Gadhaf al-Dam, who sought refuge in Egypt.

On a visit to Turkey, French President Nicolas Sarkozy said the violence by pro-Gadhafi forces is unacceptable and should not go unpunished.

The New York-based Human Rights Watch has put the death toll in Libya at nearly 300, according to a partial count. Italy's Foreign Minister Franco Frattini said estimates of some 1,000 people killed were "credible."

The upheaval in the OPEC nation has taken most of Libya's oil production of 1.6 million barrels a day off the market. Oil prices hovered above $98 a barrel Friday in Asia, backing away from a spike to $103 the day before amid signs the crisis in Libya may have cut crude supplies less than previously estimated.

The opposition camp says it is in control of two of Libya's major oil ports -- Breqa and Ras Lanouf -- on the Gulf of Sidra in central Libya. A resident of Ras Lanouf said Friday that the security force guarding that port had joined the rebellion and were helping guard it, along with residents of the area.

Signaling continued defiance, Gadhafi's son Seif al-Islam, vowed his family will "live and die in Libya," according an excerpt from an interview to be aired later Friday on CNNTurk.

Gadhafi's militiamen -- a mixture of Libyans and foreign mercenaries -- have clamped down hard in Tripoli the past week after the Libyan leader called on his supporters to take back the streets from protesters and hunt them in their homes. A wave of arrests has taken place in recent days, with residents reporting security forces raiding homes and dragging away suspected protest organizers.

Starting Friday morning in Tripoli, militiamen set up heavy security around many mosques in the city, trying to prevent any opposition gatherings. Armed young men with green armbands to show their support of Gadhafi set up checkpoints on many streets, stopping cars and searching them. Tanks and checkpoints lined the road to Tripoli's airport, witnesses said.

When protests began in the afternoon, armed Gadhafi supporters were speeding through streets in vehicles, one witness said. He was among a crowd of protesters that spilled from a mosque but were met by militiamen at Algeria Square, adjacent to Green Square. Many scattered when the gunmen fired in the air, he said.

Several tens of thousands held a rally in support of the Tripoli protesters in the main square of Libya's second-largest city, Benghazi, where the revolt began, about 580 miles (940 kilometers) east of the capital along the Mediterranean coast.

Tents -- some with photographs of people who had been killed in fighting -- were set up and residents served breakfast to people, many carrying signs in Arabic and Italian. Others climbed on a few tanks parked nearby, belonging to army units in the city that allied with the rebellion.

"We will not stop this rally until Tripoli is the capital again," said Omar Moussa, a demonstrator. "Libyans are all united ... Tripoli is our capital. Tripoli is in our hearts."

Muslim cleric Sameh Jaber led the prayers in the square, telling worshippers that Libyans "have revolted against injustice."

"God take revenge from Moammar Gadhafi because of what he did to the Libyan people," the cleric, wearing traditional Libyan white uniform and a red cap, said in remarks carried by Al-Jazeera TV. "God accept our martyrs and make their mothers, fathers and families patient."

Similar rallies took place in other cities in the east, as well as in opposition-controlled Misrata, Libya's third largest city, located in the northwest of the country, about 120 miles (200 kilometers) from the capital.

Several thousand were gathered in Misrata's main square, chanting their support for the Tripoli protesters, a doctor at the main hospital said. A day earlier, militiamen attacked Misrata residents guarding the local airport. The doctor said 20 residents and one attacker were killed in the violence.

The worst bloodshed Thursday was in Zawiya, 30 miles (50 kilometers) west of Tripoli. An army unit loyal to Gadhafi opened fire with automatic weapons on a mosque where residents -- some armed with hunting rifles for protection -- have been holding a sit-in to support protesters in the capital, a witness said. A doctor at a field clinic set up at the mosque said he saw the bodies of 10 dead, shot in the head and chest, as well as around 150 wounded. A Libyan news website, Qureyna, put the death toll at 23.

Zawiya, a key city close to an oil port and refineries, is the nearest population center to Tripoli to fall into the opposition hands.

The European Union's foreign policy chief, Catherine Ashton, said Friday that the bloc needs to consider sanctions such as travel restrictions and an asset freeze against Libya to achieve a halt to the violence there and move toward democracy.

NATO's main decision-making body also planned to meet in emergency session Friday to consider the deteriorating situation, although Secretary-General Anders Fogh Rasmussen has said the alliance has no intention of intervening in the North African nation.

The U.N.'s top human rights official, Navi Pillay, meanwhile, said reports of mass killings of thousands in Libya should spur the international community to "step in vigorously" to end the crackdown against anti-government protesters.