The latest on crackdowns in the Mideast and U.S. responses

As protests and crackdowns ripple throughout the Arab world, a look at the various U.S. reactions to each country 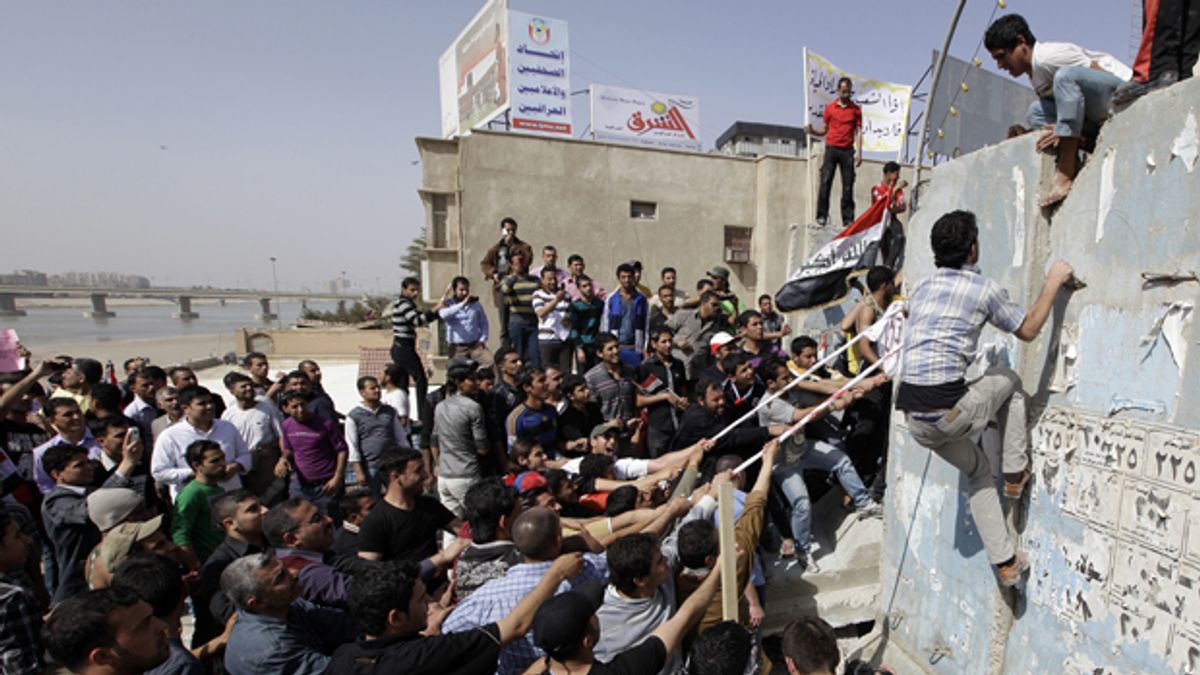 Protesters pull down a concrete wall in Baghdad during Iraq's "Day of Rage."
--

This story was originally published on ProPublica.

As protests -- and crackdowns -- have been rippling through the Middle East, the U.S. response has varied by country.

We've been tracking what's happening and how the United States has responded in our overview of Middle East crackdowns. Here's an updated version with the latest on developments in the region and how U.S. strategy is playing out:

What's been happening: Though it's difficult getting an exact figure on how many have died in the escalating violence in Libya, by most accounts hundreds of protesters have been killed by the regime of Muammar Qaddafi and his hired mercenaries.

As we noted this week, Qaddafi has clung to power, vowing to fight "until the last drop of my blood." Qaddafi's maintains a stronghold in Tripoli, the besieged capital city, while the opposition has taken control of eastern Libya. On Thursday, Qaddafi blamed the uprising on the influence of al-Qaeda. Libyan officials told the State Department that the government now considers journalists who entered the country "illegally" to be "al-Qaeda collaborators."

"We will hold the Libyan Government fully responsible for this," State Department spokesman P.J. Crowley told reporters this week. The U.S. has focused on getting American citizens in Libya to safety and said all options are on the table in terms of potential sanctions against the country. So far none have been announced, and the United States has not called for Qaddafi's ouster, saying that "what happens to the leadership of Libya is up to the Libyan people."

Relationship status with United States: BFF, though a bit awkward lately
The small oil-producing country and financial center has played host to a robust U.S. military presence as home of the U.S. Navy's Fifth Fleet. Bahrain's Sunni rulers -- who rule over a majority-Shi'ite population -- keep "close to their American protectors," according to a 2008 WikiLeaks cable.

What's been happening: Last week, government forces unleashed brutal attacks on crowds of protesters and mourners, wounding hundreds and killing seven after they had declared the protests illegal. Last Thursday, the Bahraini government defended the crackdown as "a very important step that had to happen" to prevent the country from falling into "a sectarian abyss."

The situation has recently calmed down, and security forces have been ordered off the streets. Though the opposition doesn't agree on everything -- some protesters have rejected the Sunni ruling family altogether -- their core demands have included the release of political prisoners and a fully elected government, Reuters reported. The government has signaled intentions to begin a national dialogue and this week released hundreds of political prisoners.

U.S. response: Secretary of State Hillary Clinton praised Bahrain's leaders earlier this week for opening dialogue after last week's violence. She called on the government to follow with "concrete actions and reforms."

Last week, after days of issuing statements of concern about the violence, Clinton spoke by phone with Bahrain's foreign minister and "stressed the need to seriously engage all sectors of society in a constructive, consultative dialogue." She cited the need for continued reform and reiterated that Bahrain is a "friend and ally." (Related: See our post about the praise that the United States lavished on Bahrain just two months prior to these attacks.)

The Washington Post reported on Sunday that the U.S. government had used public encouragement and private pressure on the Bahraini government to end its crackdown on protesters. Adm. Mike Mullen arrived in Bahrain yesterday as part of a trip to the Middle East and met with the king and the crown prince. National Security Adviser Tom Donilon also spoke with Bahrain's crown prince yesterday, expressing "strong support" for steps taken to open dialogue.

Relationship status with United States: Frenemies
In a press briefing earlier this month, Press Secretary Robert Gibbs stated, "Our relationship with the government of Yemen is incredibly important in addressing the counterterrorism threat that exists there." As WikiLeaks cables revealed last fall, the country's president, Ali Abdullah Saleh, has allowed secret U.S. air strikes against suspected al-Qaeda sites and covered them up, claiming they were conducted by the Yemeni military. However, some analysts have said Yemen is playing a double game -- diverting U.S. aid to not go after al-Qaeda and instead to fight domestic rebels.

What's been happening: At least a dozen people are reported to have been killed since the protests began in Yemen. Though demonstrations appeared to be peaceful on Friday, some protesters last week were beaten by Yemeni security forces, according to Human Rights Watch. The Financial Times reported on Wednesday that nine members of parliament have resigned in protest of the government's violence against demonstrators.

Yemen's President Ali Abdullah Saleh said this week that he won't step down but will open a dialogue with protesters. On Wednesday he instructed security forces to "thwart all clashes" between pro- and anti-government protesters -- and to offer protection for demonstrators.

U.S. response: Earlier this month, President Obama called Yemen's President Saleh and "asked that Yemeni security forces show restraint and refrain from violence" against demonstrators. He also urged Yemen to take forceful action against al-Qaeda, according to the State Department. The State Department's P.J. Crowley also tweeted about the necessity of foreign aid to Yemen, saying that potential cuts would "constrain our ability to help Yemen" confront al-Qaeda."

Relationship status with U.S.: It's complicated
As U.S. diplomatic cables show, relations between the United States and Algeria have warmed gradually in recent years. In a February 2008 cable, U.S. diplomats called Algerian military intelligence "a prickly, paranoid group to work with," but noted that cooperation had paid dividends. A cable sent early last year noted Algeria's strategic importance in the fight against al-Qaeda in the region.

What's been happening:
According to the BBC, sporadic protests in Algeria have been continuing since early January, mostly triggered by economic conditions. Algerian security forces arrested dozens of protesters and police attacked some journalists in crackdowns, but the government has since promised reforms and lifted an emergency law that had banned protests and gave police broad powers to detain citizens.

U.S. response:
On Thursday the president made a statement commending Algeria's government for taking "an important step forward" by lifting the emergency law, calling it a "positive sign" that Algeria is listening to the concerns of its people.

The State Department's Crowley had previously released a statement noting the protests and calling "for restraint on the part of the security services."

Relationship status with United States: Enemies
The U.S. currently has sanctions against Iran and has a now 30-year history of tension.

What's been happening:
Members of the Iranian Parliament called for the leaders of the protest movement to be executed. The government has also clamped down hard on protest organizers. At least three protestors have been reported killed.

U.S. response:
The U.S. response to Iran has been harsher than to some of the other governments suppressing protests. Secretary of State Hillary Clinton issued a statement on Wednesday calling out Iranian security forces for having beaten, detained and killed peaceful protesters and for persecuting ethnic minorities, human rights advocates and political activists. "The steady deterioration in human rights conditions in Iran has obliged the international community to speak out time and time again," Clinton said, while sanctioning two more Iranian officials for the abuses.

State Department spokesman P.J. Crowley had previously stated that the United States condemned the violence in Iran "in the strongest terms." Asked in an early briefing why the State Department is "condemning what is happening in Iran" and not taking the same position on crackdowns elsewhere, Crowley said, "Well, actually, in the other countries there is greater respect for the rights of the citizens. I mean, we are watching developments in other countries, including Yemen, including Algeria, including Bahrain. And our advice is the same."

At least nine protesters were killed in Iraq on Friday as protesters in several cities participated in "Day of Rage" demonstrations to call for an end to corruption, the Washington Post reports. Iraqi officials had urged the people to stay away, warning that the protests seem "suspicious" and could be infiltrated by terrorists, but tens of thousands turned out anyway -- in some cities, police and security guards opened fire on the crowds.

While some protests have been going on in parts of Saudi Arabia, in an effort to stave off larger protests, Saudi King Abdullah this week announced an estimated $37 billion in pay raises, unemployment benefits and housing help. Critics have warned that the gesture isn't a substitute for meaningful political reform, the Guardian reported. The State Department said Thursday that it was "in touch with the Saudis" but did not have further comment.

Inform our investigations: Do you have information or expertise relevant to this story? Help us and journalists around the country by sharing your stories and experiences.