But with Democratic state senators in hiding across the border, the bill won't go further -- for now 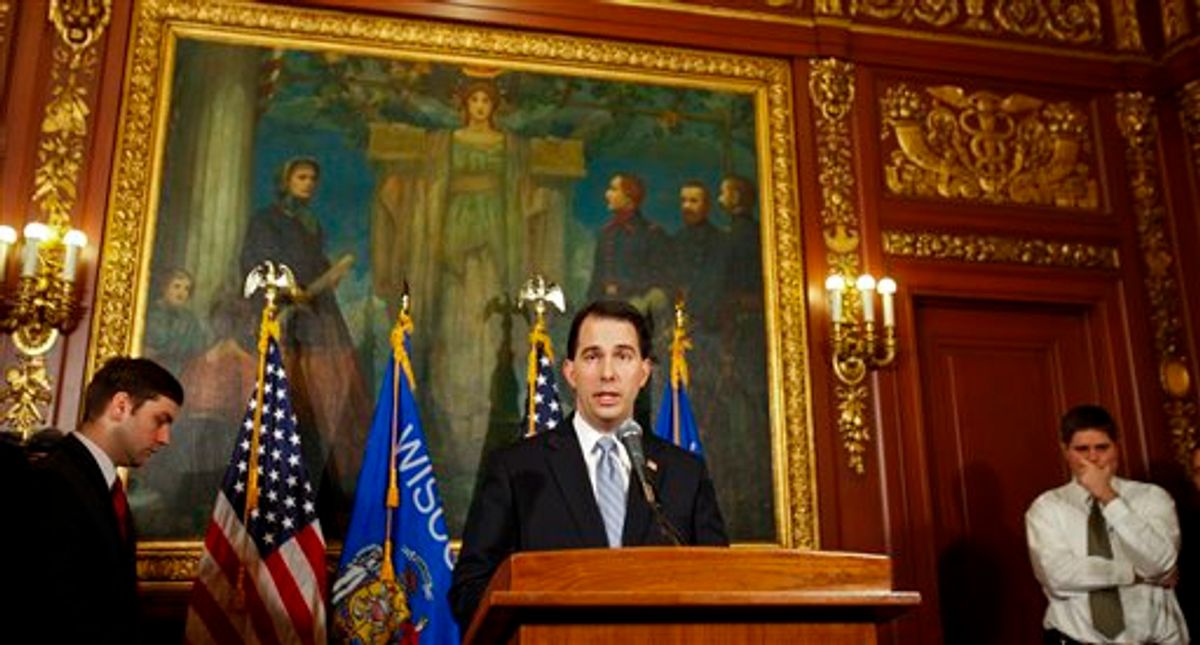 Wisconsin Gov. Scott Walker talks to the media at the state Capitol in Madison, Wis., Wednesday, Feb. 23, 2011. Opponents to the governor's proposal to eliminate collective bargaining rights for many state workers are in their ninth day of protests at the Capitol. (AP Photo/Andy Manis) (AP)
--

Republicans in the Wisconsin Assembly took the first significant action on their plan to strip collective bargaining rights from most public workers, abruptly passing the measure early Friday morning before sleep-deprived Democrats realized what was happening.

The vote ended three straight days of punishing debate in the Assembly. But the political standoff over the bill -- and the monumental protests at the state Capitol against it -- appear far from over.

The Assembly's vote sent the bill on to the Senate, but minority Democrats in that house have fled to Illinois to prevent a vote. No one knows when they will return from hiding. Republicans who control the chamber sent state troopers out looking for them at their homes on Thursday, but they turned up nothing.

"I applaud the Democrats in the Assembly for earnestly debating this bill and urge their counterparts in the state Senate to return to work and do the same," Assembly Speaker Jeff Fitzgerald, R-Horicon, said in a statement issued moments after the vote.

The plan from Republican Gov. Scott Walker contains a number of provisions he says are designed to fill the state's $137 million deficit and lay the groundwork for fixing a projected $3.6 billion shortfall in the upcoming 2011-13 budget.

The flashpoint is language that would require public workers to contribute more to their pensions and health insurance and strip them of their right to collectively bargain benefits and work conditions.

Democrats and unions see the measure as an attack on workers' rights and an attempt to cripple union support for Democrats. Union leaders say they would make pension and health care concessions if they can keep their bargaining rights, but Walker has refused to compromise.

Tens of thousands of people have jammed the Capitol since last week to protest, pounding on drums and chanting so loudly that police providing security have resorted to ear plugs. Hundreds have taken to sleeping in the building overnight, dragging in air mattresses and blankets.

With the Senate immobilized, Assembly Republicans decided to act and convened the chamber Tuesday morning.

Democrats launched a filibuster, throwing out dozens of amendments and delivering rambling speeches. Each time Republicans tried to speed up the proceedings, Democrats rose from their seats and wailed that the GOP was stifling them.

Debate had gone on for 60 hours and 15 Democrats were still waiting to speak when the vote started around 1 a.m. Friday. Speaker Pro Tem Bill Kramer, R-Waukesha, opened the roll and closed it within seconds.

Democrats looked around, bewildered. Only 13 of the 38 Democratic members managed to vote in time.

Republicans immediately marched out of the chamber in single file. The Democrats rushed at them, pumping their fists and shouting "Shame!" and "Cowards!"

The Republicans walked past them without responding.

Democrats left the chamber stunned. The protesters greeted them with a thundering chant of "Thank you!" Some Democrats teared up. Others hugged.

"What a terrible, terrible day for Wisconsin," said Rep. Jon Richards, D-Milwaukee. "I am incensed. I am shocked."

GOP leaders in the Assembly refused to speak with reporters, but earlier Friday morning Majority Leader Scott Suder, R-Abbotsford, warned Democrats that they had been given 59 hours to be heard and Republicans were ready to vote.

The governor has said that if the bill does not pass by Friday, the state will miss a deadline to refinance $165 million of debt and will be forced to start issuing layoff notices next week. However, the deadline may not as strict as he says.

The nonpartisan Legislative Fiscal Bureau said earlier this week that the debt refinancing could be pushed back as late as Tuesday to achieve the savings Walker wants. Based on a similar refinancing in 2004, about two weeks are needed after the bill becomes law to complete the deal. That means if the bill is adopted by the middle of next week, the state can still meet a March 16 deadline, the Fiscal Bureau said.

Frustrated by the delay, Senate Republican Majority Leader Scott Fitzgerald, Jeff Fitzgerald's brother, ordered state troopers to find the missing Democrats, but they came up empty. Wisconsin law doesn't allow police to arrest the lawmakers, but Fitzgerald said he hoped the show of authority would have pressured them to return.

Erpenbach, who was in the Chicago area, said all 14 senators remained outside of Wisconsin.