We can't know who's going to win. But we can tell you what to watch for: Banksy, virtual set disasters and more 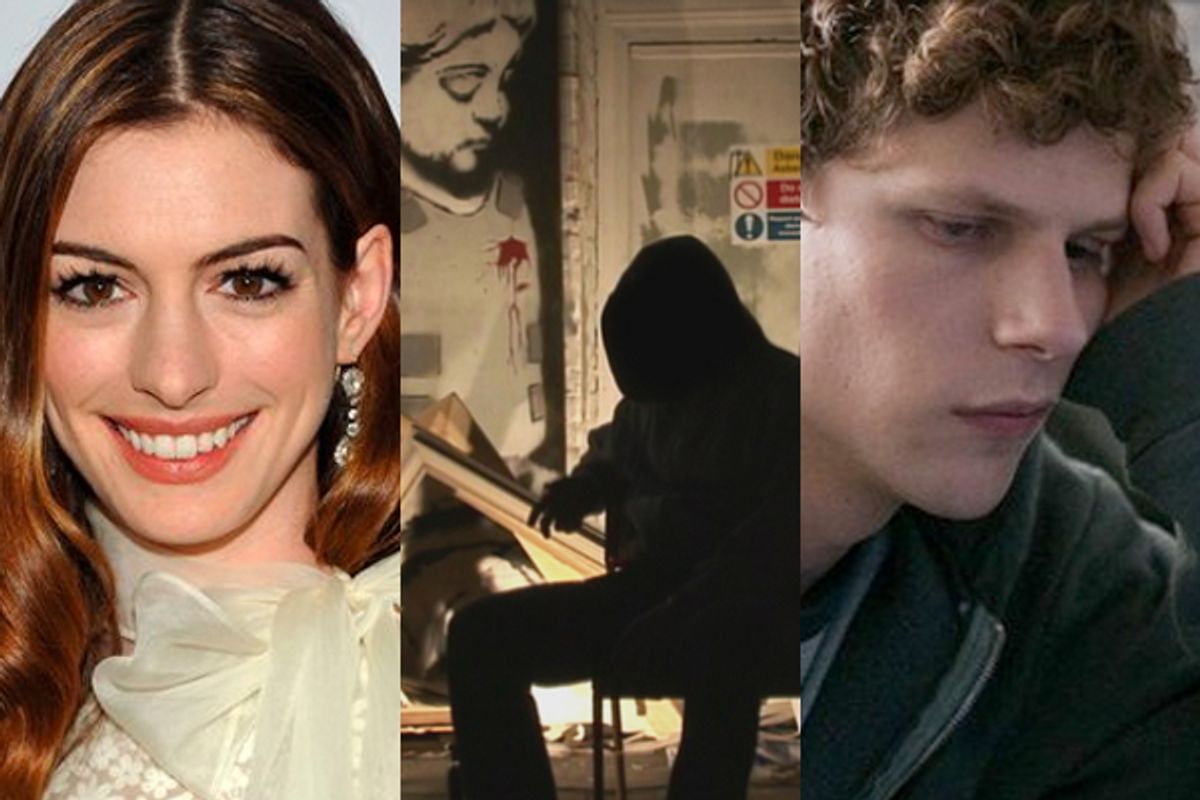 I will admit to being totally suckered by the snippet from a "Grease" number that will apparently be performed by Oscar co-hosts James Franco and Anne Hathaway on Sunday night. Sneaking that out the way they did -- via Franco's Twitter feed -- is a nifty use of social media and sends a signal that the Oscars are hipper and savvier under the new regime. Or simultaneously hipper and suffused with nostalgia, which is even better. Now, I'd be delighted if they decide to do the whole damn show as selections from classic musicals: "West Side Story," anyone? "Oklahoma"? "The Band Wagon"? But any tiny flub by either of the stars -- a missed dance step or a mistimed lip-sync -- will launch a tide of snarky Tweets to rival the parting of the Red Sea.

In what the Hollywood Reporter has described as a "radical departure" from past Oscar telecasts, the show's producers are reportedly abandoning traditional set design for a series of projections meant "to take viewers on a trip through Hollywood history." Now, first of all, we hear almost exactly the same Orwell-lite rhetoric every year, reminiscent of the way fashion magazines write about the fall collections: Past double-plus-ungood! Present and future awesome! I suppose it's possible that this year's electronic dog-and-pony show will seem like a technological Great Leap Forward into the age of virtual reality (which was more like 1996, but never mind). It's also possible it will resemble a trip to the Universal Studios theme park, or a pharmaceutical industry trade show. Why aren't Hall & Oates performing?

Best Picture: "The Social Network" vs. "The King's Speech" (with "True Grit" sneaking up on the outside)

The main event in the best-picture race -- a much-discussed showdown between a movie about a Harvard dropout turned Internet zillionaire and a movie about a stutterer who becomes king of England -- now seems almost like an afterthought, as I recently discussed with my Salon colleague Matt Zoller Seitz. But not entirely! While "The King's Speech" is widely expected to be Sunday's big winner, and could easily pile up seven or eight awards, some Oscar-watchers still wonder whether the two big titles will cancel each other out, while a dark horse -- maybe "The Fighter" or "True Grit" -- sneaks in, à la "Crash" in 2005, and steal the prize.

There's a widespread view that the directing prize is where "The Social Network" will receive its consolation prize, with David Fincher receiving a kind of mid-career achievement award, in place of the Oscars he didn't win for "Zodiac" and "Fight Club." But don't be shocked if Fincher gets nudged off the dais by Darren Aronofsky, whose dark and dazzling "Black Swan" bespeaks a powerful individual vision that has wowed Hollywood, but is simply too idiosyncratic to be a serious best-picture contender.

How quickly the wind can change! Even a few days ago, when Matt Zoller Seitz and I discussed the best-actress nominees in a chat session, we both assumed that Annette Bening's performance as an alcoholic lesbian mom in the soapy but highly affecting "The Kids Are All Right" was a near shoo-in. We were behind the curve, baby, and now the smart money expects Natalie Portman to be crowned as Hollywood royalty while Bening looks on graciously. (I'm still rooting for the latter, but thinking more realistically.) Portman, one expects, will go for bland, safe and humble; she must understand that she's a controversial figure among movie buffs and that this moment will define the rest of her career.

There's no significant suspense in the best-actor race, and you can probably get excellent odds in Vegas by betting the "J" field (that would be Javier Bardem, Jeff Bridges, Jesse Eisenberg and James Franco) against Colin Firth's performance as stuttering King George VI in "The King's Speech." Firth is widely respected and genuinely liked; he is a classically trained British actor with impeccable Hollywood credentials, and his moment onstage will be a love-in. (By the way: No, this isn't an award for "A Single Man" a year later, smartypants. "King's Speech" may not be earth-shattering cinema, but he's terrific in it.)

Leading indicators: How to read the Supporting Actor and Actress races

These categories tend to produce oddball winners, so don't be shocked to see, say, Jeremy Renner, who was the best thing in Ben Affleck's ludicrous Boston fantasia "The Town," or Jacki Weaver of the Aussie crime thriller "Animal Kingdom," up there. (Those would, in fact, be admirable choices.) My hunch, however, is that these categories may provide exit-polling results that point toward a "King's Speech" landslide, with Geoffrey Rush and Helena Bonham Carter winning instead of the favorites (probably still Christian Bale and Melissa Leo, both from David O. Russell's underappreciated "The Fighter").

While most observers expect Charles Ferguson's excellent financial-collapse doc "Inside Job" to win the Oscar, much of the attention inside the Kodak Theatre will be devoted to figuring out whether phantom-like English street artist Banksy, the director or entrepreneur or grifter or whatever of the hilarious "Exit Through the Gift Shop," is there at all. Academy higher-ups have decreed that Banksy may not attend in disguise, so maybe he'll wear a garbage bag, as fellow Brit Lucy Walker did for the New York premiere of her nominated doc, "Waste Land."

As recently reported in Salon, "Waste Land" has been surrounded by murky whispers that Walker didn't personally make much of it (which she and her producers strenuously deny). That could create an interesting onstage moment if this inspiring saga of an improbable art project in the Rio landfill captures the prize, as seems distinctly possible.

No, I'm totally kidding. Or rather, I'm just throwing a bone to the tiny and desperate cinephile core here, because there is no way in frickin' heck that the cryptic Greek allegory "Dogtooth," one of the more surprising nominees in Oscar history, wins anything ever. That said, the foreign-language Oscar race, with its arcane rules and history of total lottery-ticket randomness, has virtually no commercial or artistic ramifications and could go to any movie on the list. "Biutiful" (officially the Mexican entry, although made entirely in Spain) offers a name-brand star and filmmaker in Javier Bardem and "Babel" director Alejandro González Iñárritu, but that counts for much less in this category than in any other. I won't be surprised if Danish director Susanne Bier's "In a Better World" or French-Canadian director Denis Villeneuve's "Incendies" (neither yet released in the United States) snatches the prize, leaving a worldwide audience mildly puzzled.