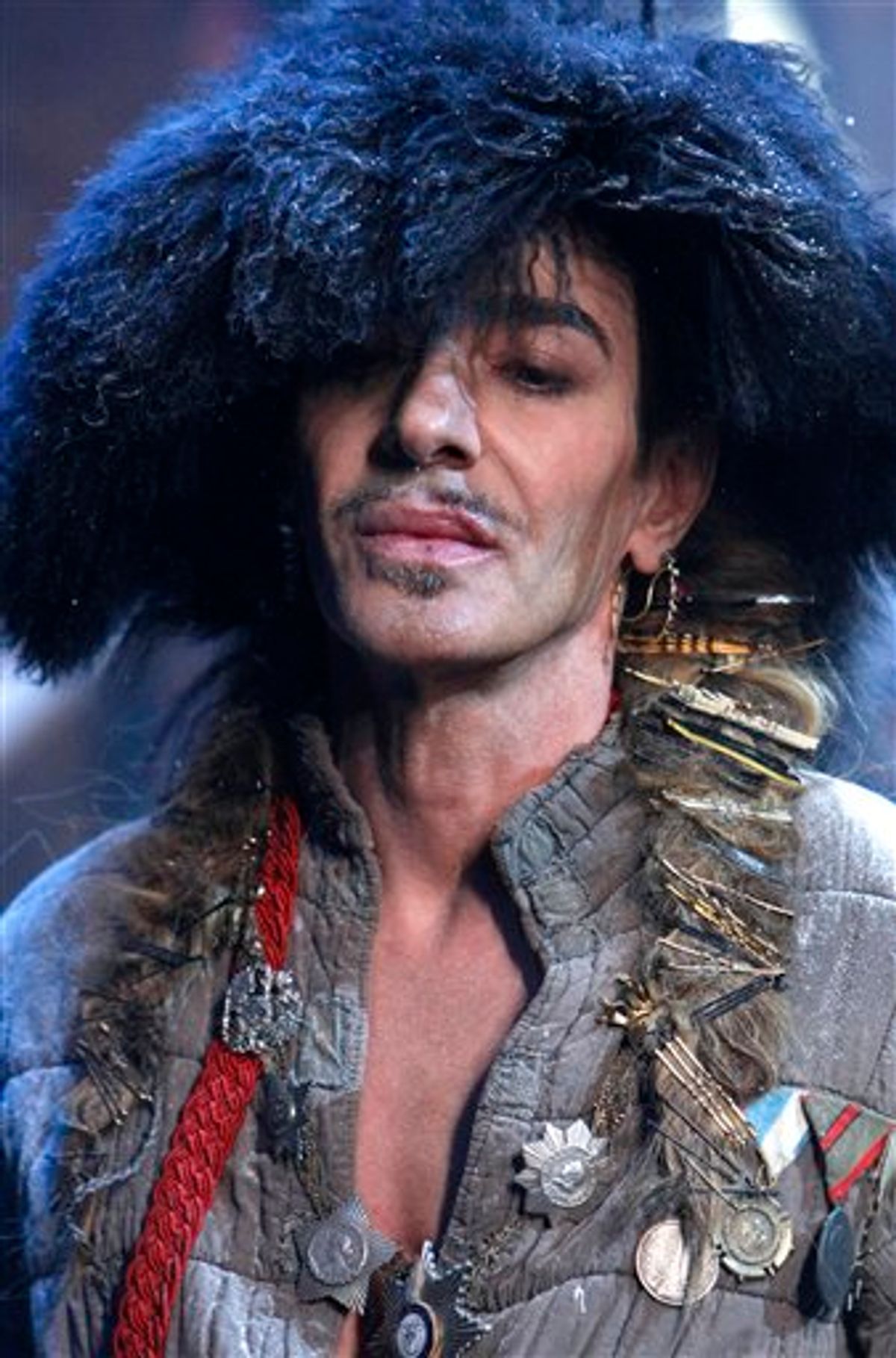 It turns out that decking herself out in shimmering white Dior for Sunday's Oscars was an unfortunately timed sartorial gambit for Nicole Kidman. Last week, the legendary house's creative director, John Galliano, was suspended from work for after being arrested in Paris following an altercation with a couple in a restaurant. One of Galliano's targets, Geraldine Bloch, said he threatened to kill her companion, told her she had a "dirty Jew face," and then got into a slapping fight with the couple. After releasing him from custody, police said his blood alcohol was nearly twice the legal limit.

Dior soon issued a statement that "The House of Dior declares with the greatest firmness its policy of zero tolerance with regard to any anti-Semitic or racist statement or attitude." And via his lawyer, Galliano swiftly shot back that "At no moment did he make these insults. We have witnesses to that effect" and that "legal action would be taken against those making such accusations."

But things got worse for the pencil-mustachioed, tiny-hatted Brit's credibility on Monday, when Britain's The Sun newspaper released an updated video of another restaurant tirade. In it, the clearly slurring designer tells dinner guests at a neighboring table, "I love Hitler. People like you would be dead today. Your mothers, your forefathers, would all be fucking gassed." Then for good measure, he replied to the question, "Where are you from?" with "your asshole" and noted, "You're ugly."

His words were unquestionably revolting, but the consequences for such a tirade are far more serious in France -- which is why both Dior and Galliano reacted so swiftly and strongly after the dustup last week. Making anti-Semitic remarks is illegal in France, and the penalty can be up to six months in jail. Consider how much harder Charlie Sheen had to work to get booted from his job in America.

Whatever you may think of France's hard line on free if despicable speech, the truth is that Galliano will likely not be sporting a jaunty orange jumpsuit any time soon. But the professional fallout may well be severe. How many stars will want to strut the red carpet in his designs knowing his fondness for telling people they'd be dead if the Führer were still around? Will Kate Moss reconsider her choice to have Galliano design her wedding gown? Will the next step be some perfunctory public walk of shame and rehabilatory damage control, or is his career already as irrelevant as last year's hemlines? Whatever the case, it takes only a few seconds of watching his brutal, nasty and truly sloppy tirade to see that a man who makes gorgeous clothes may be quick to brand others ugly, but he's painfully unaware of how fully cloaked in hideousness he is himself.