Lady Gaga tries to make the gayest video ever 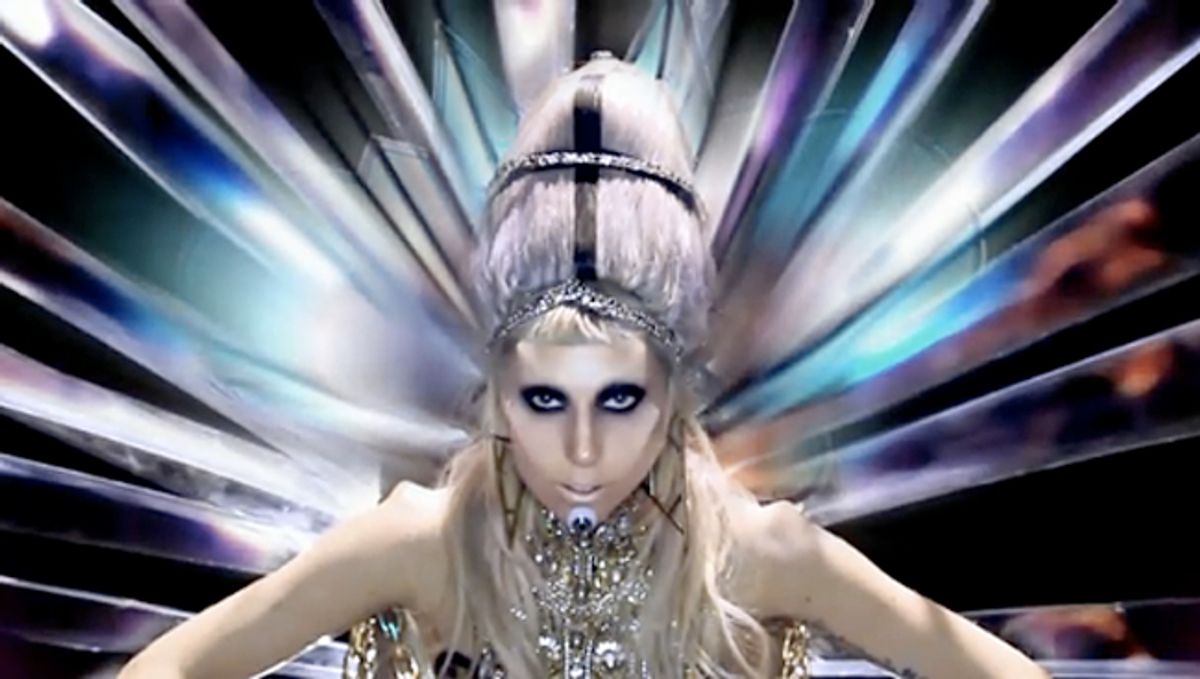 It starts with the pink triangles. And, of course, a unicorn. Lady Gaga is clearly determined to make the gayest! music video! of all time! with "Born This Way," even if Take That's "Back for Good" is likewise dead set on holding on to the title.

The video, which released Monday morning, is a typical Gaga space oddity, disco sci-fi for the masses. In her opening "manifesto of Mother Monster," she takes us to GOAT, the Government Owned Alien Territory, where there's some sort of infinite birth going on, one that spawns the first documented use of the word "mitosis" in a dance track. But with the dawn of a new race, one with "boundless freedom," there also comes the birth of, what else? Eeeevilllll. And there's only one way to fight evil. Bikini dancing!

The Nick Knight-directed clip is surely as big, splashy and out there as anything the Lady has ever delivered -- a nearly eight-minute festival of bare skin, strutting and Gaga's new horns. With its heavy use of gauze and tuxedos, it's certainly not going to dispel the comparisons to every Madonna song ever done, and the inspiration of video artist Marco Brambilla is so obvious, it just might give Kanye West something new to tweet angrily about.

Yet there are also plenty of distinctly trademark Gaga touches of odd, including a Day of the Dead interlude with tattooed body mod poster boy Rick Genest, lots of freaky heads, and much taking of the phrase "born this way" as an excuse for gooey birth metaphors. Perhaps the best thing about it is how full it is of moments when Gaga looks absolutely ecstatic, delighted to be doing what she adores while giving a huge chunk of her loyal fan base an open -- and sincere seeming -- love letter of pride. When she's simply shaking her moneymaker, she looks cuter and campier than she has since "Just Dance."

But there's something off-key about opening and closing an anthem with Holocaust imagery (the pink triangles, not the unicorn), even if Gaga just isn't the rainbow type. And the near desperate aggressiveness of the whole hype for "Born This Way" -- the song, the album and the video, the inevitable sandwich and "Glee" tribute -- is ultimately more fatiguing than celebratory. Gaga's heart, along with her collection of weird heads, is in the right place. But she needs to take her own advice and not be a drag. Lady, you're Gaga. Just be a queen.