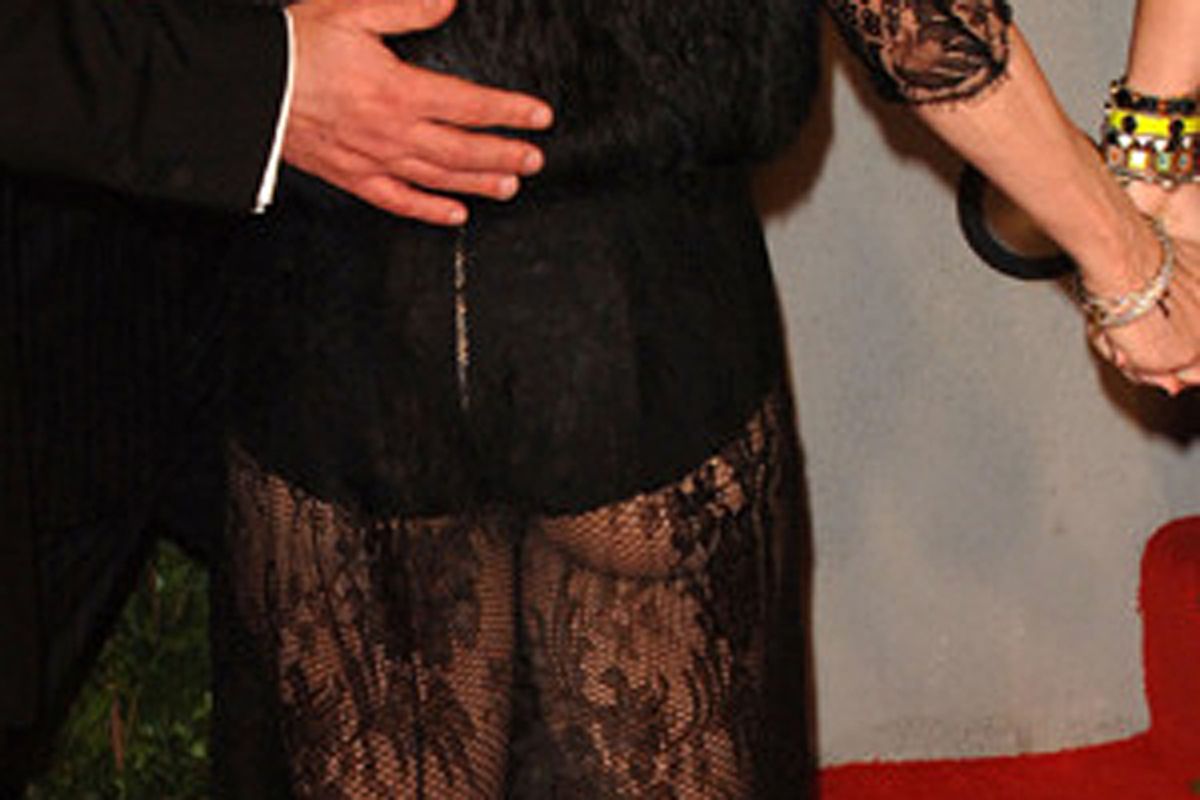 It must be very satisfying to be Madonna. After nearly three decades in the public eye, the woman whose bellybutton launched a generation of boy toys can still drum up shock with her revealing outfits.

At the Vanity Fair Oscar party Sunday night, the 52-year-old pop icon decked herself out in a furry vest, a black leotard, and a deeply slit lace dress. In its sensibility, it wasn't a departure from the singer's usual form-flaunting sensibility. But the high, derriere revealing cut of the outfit, combined with the presence of Madonna's companion for the evening, her teenage daughter, was cause for much Monday morning tut-tutting. Think of the children -- surely Lourdes must be mortified!

The Daily Mail predictably ran with the headline that Madonna "embarrasses Lourdes as she brandishes her bottom" and the observation that Madge is "refusing to grow old gracefully." HuffPo similarly noted Lourdes' "semi-embarrassed look," and even Jezebel pointed out that "Madonna Wears Skimpy Ensemble to Party," although to its editorial eye, the brave Lourdes "doesn't flinch."

The commenters were predictably even less charitable, riffing on Madonna's "tacky" "hooker" look and lamenting, "When you're in public with your teenaged daughter, is it too much to ask for just a teensy bit of decorum?" There were some attagirls thrown in too, but really, when we're talking about Madonna, you're talking about provocative behavior and predictable outrage. It's just changed in recent years from "Oh that crucifix-wearing strumpet!" to "Oh that middle aged, crucifix-wearing strumpet mom!"

Granted, the outfit is ugly as sin. A good rule of thumb regarding fur vests is to ask oneself, "Am I Donovan?" But if you're worried about embarrassing your kid, don't bother fretting about how much booty you're showing. You don't have to wear a lace dress to earn a potential eye roll. It comes with existing on the same planet she and her friends do.

More important, though, this is Madonna we're talking about here. And she, like Cher and Helena Bonham Carter, plays by her own fashion rules. Why should she start dressing according to anyone else's idea of "age appropriate" now? When has the word "appropriate" ever been part of her vocabulary anyway? She doesn't care what you think. She's got a pool boy to hook up with and a fake British accent to butcher. And as long as it can still get a reaction, her butt won't be going away any time soon.