In her acceptance speech, the "Black Swan" star suggests that pregnancy trumps a career. She's wrong 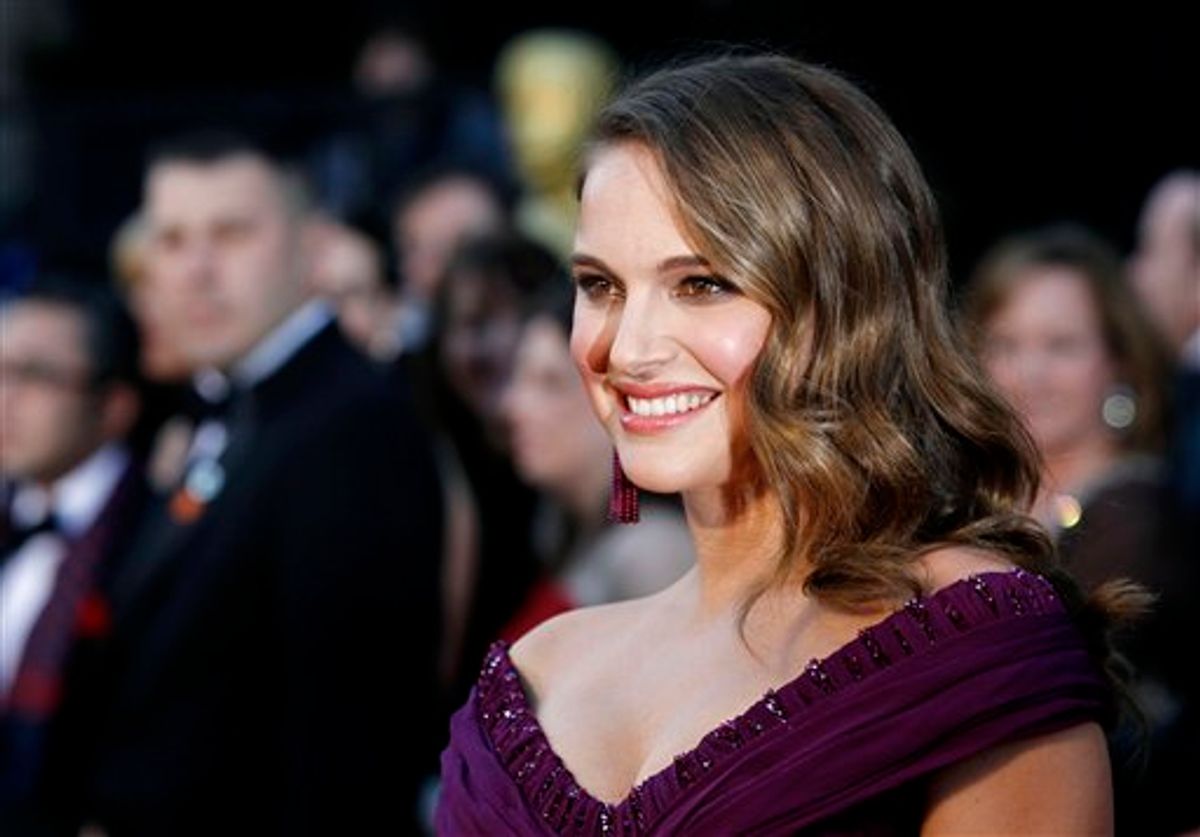 Late Sunday night, when many of us at home were praying for the sweet release of a Celine Dion-serenaded death, anything to escape our long international nightmare of the Oscars, a glowingly pregnant Natalie Portman finally took the stage to accept the Academy Award as best actress. She was as lovely and slightly awkward as she has been every time she's hauled home another prize for her devastatingly creepy turn in "Black Swan," thanking her fellow nominees, her parents, the directors who've guided her career, and then at last "my beautiful love," dancer and choreographer Benjamin Millepied, for giving her "the most important role of my life." That'd be when he impregnated her, I'd wager.

At the time, the comment jarred me, as it does every time anyone refers to motherhood as the most important thing a woman can possibly do. But the reason why didn't hit me until I saw the ever razor sharp Lizzie Skurnick comment on Twitter today that, "Like, my garbageman could give you your greatest role in life, too, lady."

When you're pregnant, especially for the first time, there are a lot of amazed and awed moments in between the heartburn and insomnia. But is motherhood really a greater role than being secretary of state or a justice on the Supreme Court? Is reproduction automatically the greatest thing Natalie Portman will do with her life?

And as Portman looked out into the audience at her main competition this year, mother of four Annette Bening, I wonder if she saw an actress who has admitted freely she's limited her career for her children, who says, "I have all these conditions on which I can work," but who also cops freely that work "is very important."  "Women aren't supposed to acknowledge that," she said in an interview last year, "and pretend that it's all just fabulous and we love every moment and it's just a wonder … It is a wonder, but it's also tiring and really, really hard work and a lot of the time your life is not about you, it's about what everyone else wants. There's that selflessness you need to find, and on the other hand, you hire a babysitter and you go out and you do your work."

It's not that motherhood isn't of huge value. But there's a difference between Portman's conditional acceptance of her lesser triumph last night and Kate Winslet's simple gratitude toward her "two beautiful children" when she won the Oscar two years ago, or Reese Witherspoon thanking her two children at her Oscar acceptance for "loving and supporting me" -- with the caveat that "You should be going to be bed." Why, at the pinnacle of one's professional career, would a person feel the need to undercut it by announcing that there's something else even more important? Even if you feel that way, why downplay your achievement? Why compare the two, as if a grueling acting role and being a parent were somehow in competition? And remind me -- when was the last time a male star gave an acceptance speech calling fatherhood his biggest role?

Any working mom will tell you: They don't hand out prizes for being a good mother. You just do it, with as much love and heart and soul as you've got. If you're lucky, it doesn't diminish you as an artist -- it inspires you to greater heights, as this year's mothers nominated for playing mothers -- Nicole Kidman, Michelle Williams and Annette Bening -- probably know. Motherhood is important. So is work. And you don't have to backhandedly downplay one to be proud of the other.