The Republican response to a new private-sector analysis of their spending bill: La la la, I can't hear you! 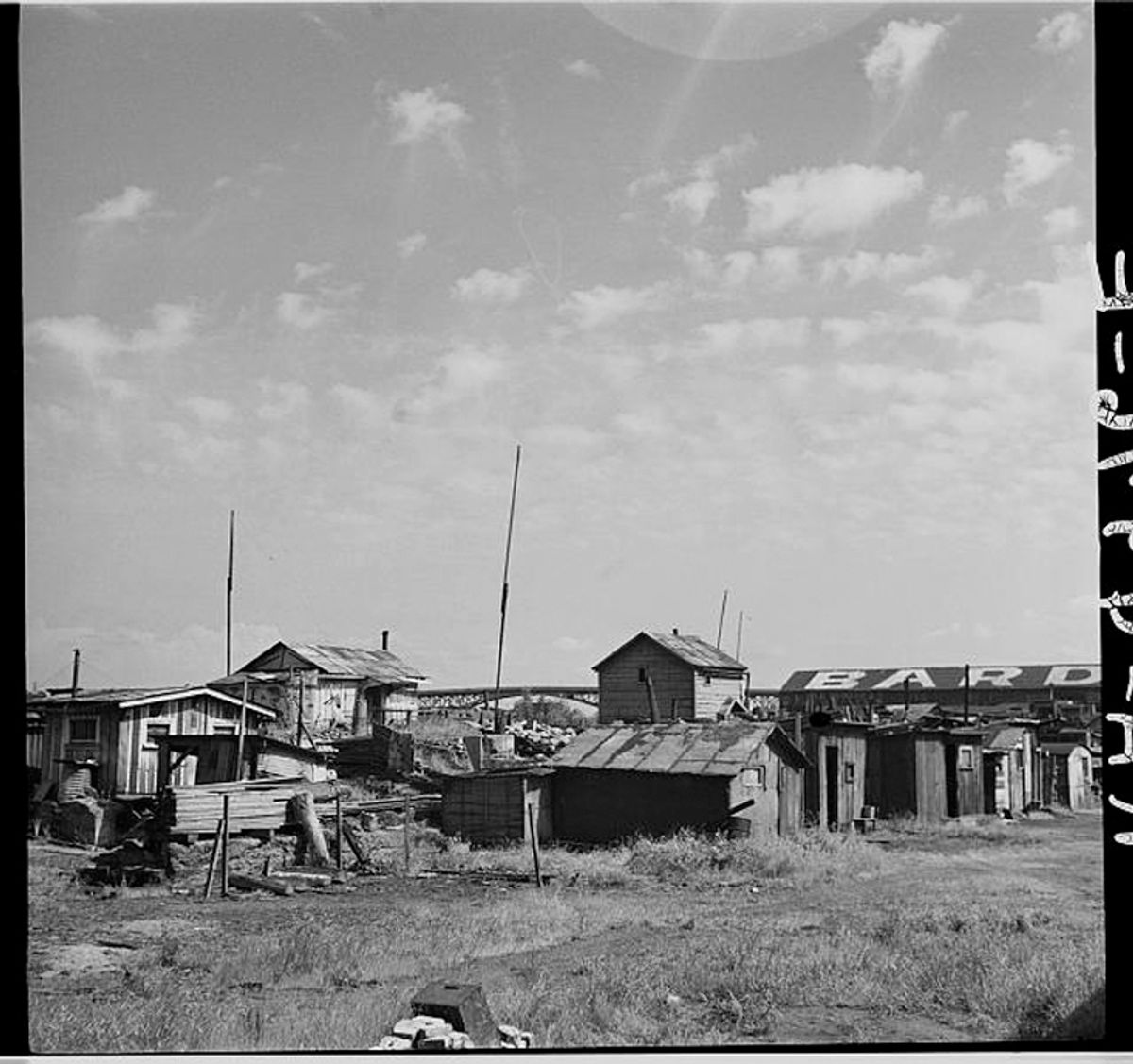 Squatters' shacks along the Willamette River, Portland, Oregon in 1936.
--

Mark Zandi was an economic adviser for John McCain's 2008 presidential campaign. He's not the kind of guy normally accused of being a Democratic pawn; he makes his living providing economic analysis to the private sector, which places a premium on being, you know, right, rather than politically correct. Nor is his prediction, like the warning released by Goldman Sachs earlier last week, particularly controversial. When governments cut spending in economies ravaged by high unemployment and characterized by a clear shortfall in aggregate demand, some amount of economic contraction is perfectly normal.

Republican leaders, however, are responding with a display of hand-waving that would be remarkable if it was so boringly consistent with their rhetoric for the last decade. Dave Weigel reports House Majority Leader Eric Cantor's response:

When considering the latest study from Mark Zandi on the GOP's efforts to rein in government spending, let's not forget that he was the chief architect of the Democrats' failed stimulus plan. Even as unemployment climbed into the double digits, Mr. Zandi continued to defend this failed policy. It shouldn't come as a surprise that he would come out against the GOP's common-sense efforts to put an end to more stimulus-style spending.

I think it's overstating the case to call Zandi "the chief architect" of the stimulus, but there's no question that he supported it, or that he, like other private forecasters, believes that the stimulus contributed to economic growth in 2009-2010, and kept unemployment from rising even higher than it ended up reaching. We don't have an alternate reality timeline to provide what economists like to call the "counterfactual" so Keynesian stimulus-backers will never be able to prove beyond the shadow of a spurious politically motivated partisan doubt that the U.S. economy would have been even worse off had Obama not marshaled a rescue plan as his first order of business. But notice the lack of anything resembling an argument based on economics or data? Cantor offers no prediction of what will happen to the economy, or what might happen to the unemployment rate, if the Republican plan is implemented. Instead, all we get is this:

House Republicans argue that their bill should become law as part of a "cut and grow" strategy that they say, by removing uncertainty about higher taxes to pay for government spending, would spur spending by businesses.

Let's be clear here. To reach a balanced budget that would permanently remove such "uncertainty" -- without ever raising anyone's taxes ever again -- would require budget cuts so deep that the U.S. economy would immediately flat-line. In fact, the only sensible response to the Republican spending plan from the private sector is to be even more cautious. Standard economic theory suggests that sharp budget cuts will slow the economy -- why would any company react to that by expanding hiring?

The only honest case Republicans can make about their current agenda would be that some short-term pain now might pave the way for later sustainable growth. If Boehner or Cantor came out and said, yes, we understand and appreciate the analysis put forth by Zandi and Goldman Sachs and we realize that subtracting demand in the short term will deliver a hit to the economy, but we are nonetheless convinced that it is the right long-term strategy, that would be a defensible, perhaps even honorable, position.

But the Republican leadership can't do that, because they are constitutionally unwilling to admit that their policies will cause any short term pain at all. Because if you open up that can of worms, you risk changing the debate topic to the question what the appropriate economic policy for this particular juncture in time should be. Even worse, would mean taking responsibility for what happens to the economy between now and Election Day 2012.

Which brings us back to the original question, a rephrasing of a theory that we're hearing more and more of from the left side of the blogosphere: The Republicans know exactly what the likely impact of their cuts will be, and they're fine with it, because the worse the economy does, the better their chances are of taking the White House in 2012.

I don't know. It's not that I wouldn't suspect politicians of such foul Machiavellianism, but I find it hard to buy the thesis that this bunch of Republicans are consciously attempting to damage the economy for political reasons. I think that they just really don't understand or care about economics. The crew that is in power now has distinguished itself by its ability to reject any kind of objective scientific or economic analysis that doesn't fit into their political schema. Whether it's the link between greenhouse gas emissions and global warming or the negative impact of subtracting demand from a weak economy is irrelevant. From the contemporary Republican point of view Obama's policies must be "job-killing" because, well, he's Obama!

And the converse simply can't be true. So no matter how impossible it is to make Republican numbers add up, that's not a problem for the Republican leadership, because reality just isn't something they are willing to accept.