A strange clause in the U.N. resolution condemning Libya is there because the U.S. demanded it 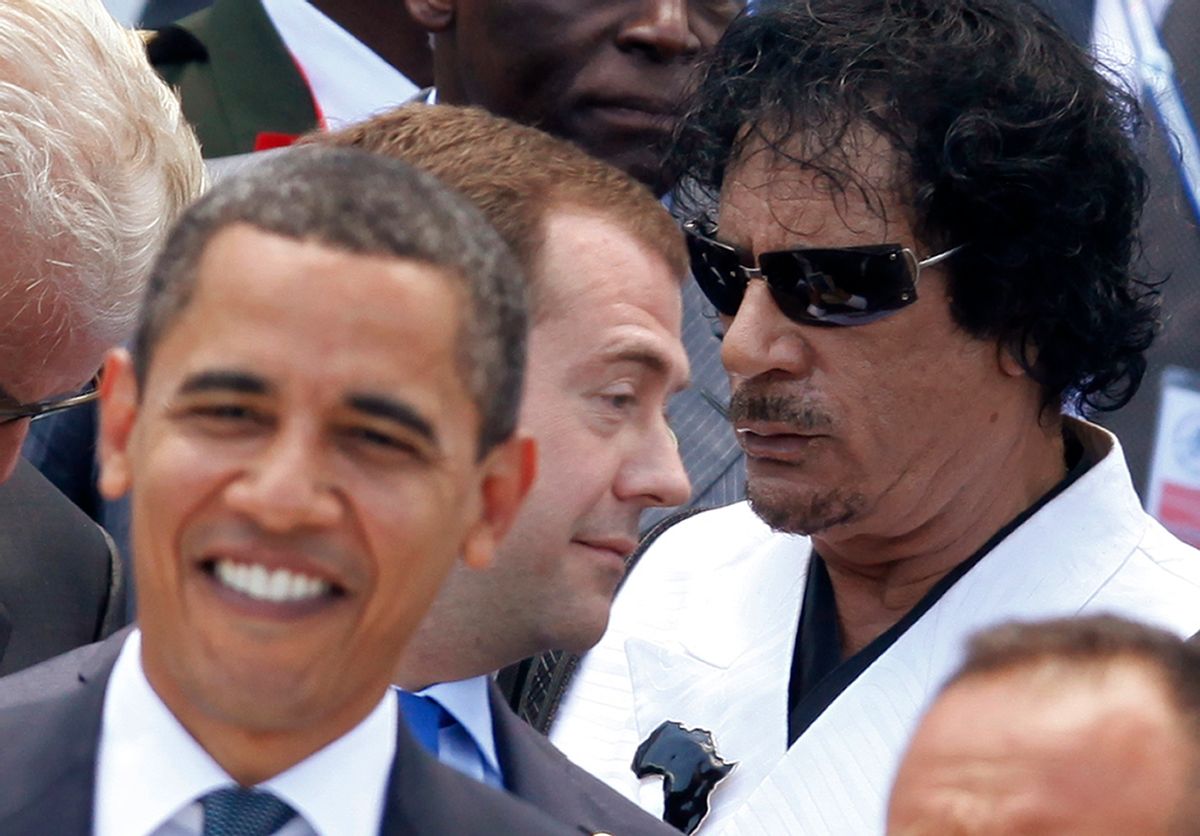 It has been widely documented that many of the worst atrocities on behalf of Libyan leader Moammar Gadaffi have been committed by foreign mercenaries from countries such as Algeria, Ethiopia and Tunisia.  Despite that, the U.N. Security Council's sanctions Resolution aimed at Libya, which was just enacted last week, includes a strange clause that specifically forbids international war crimes prosecutions against mercenaries from nations which are not signatories to the International Criminal Court (ICC), which protects many of the mercenaries Gadaffi is using.  Section 6 of the Resolution states that the Security Council:

Decides that nationals, current or former officials or personnel from a State outside the Libyan Arab Jamahiriya which is not a party to the Rome Statute of the International Criminal Court shall be subject to the exclusive jurisdiction of that State for all alleged acts or omissions arising out of or related to operations in the Libyan Arab Jamahiriya established or authorized by the Council, unless such exclusive jurisdiction has been expressly waived by the State;

Why would a clause be inserted to expressly protect war crimes-committing mercenaries on Gadaffi's payroll from international prosecutions?  Because, as The Telegraph's John Swaine reports, the Obama administration insisted on its inclusion -- as an absolutely non-negotiable demand -- due to a fear that its exclusion might render Bush officials (or, ultimately, even Obama officials) subject to war crimes prosecutions at the ICC on the same theory that would be used to hold Libya's mercenaries accountable:

[T]he US insisted that the UN resolution was worded so that no one from an outside country that is not a member of the ICC could be prosecuted for their actions in Libya.

This means that mercenaries from countries such as Algeria, Ethiopia and Tunisia -- which have all been named by rebel Libyan diplomats to the UN as being among the countries involved -- would escape prosecution even if they were captured, because their nations are not members of the court.

The move was seen as an attempt to prevent a precedent that could see Americans prosecuted by the ICC for alleged crimes in other conflicts. While the US was once among the signatories to the court, George W. Bush withdrew from it in 2002 and declared that it did not have power over Washington. . . . It was inserted despite Susan Rice, the US ambassador to the UN, saying that all those "who slaughter civilians" would "be held personally accountable".

Speaking to reporters outside the council chamber, Gerard Araud, the French UN ambassador, described the paragraph as "a red line for the United States", meaning American diplomats had been ordered by their bosses in Washington to secure it. "It was a deal-breaker, and that's the reason we accepted this text to have the unanimity of the council," said Mr Araud.

This report notes that Araud blamed the Obama administration's demand on "parliamentary constraints" -- implying that Obama officials believed inclusion of this provision was the only way to induce Congress to approve and implement it.  There's no evidence that this is the case, but whatever the motives, here we have yet another episode where the U.S. exempts itself from standards it purports to impose on the rest of the world:  in this case going so far as to allow murderous mercenaries to go unpunished all in service of this administration's overarching, compulsive goal of ensuring that America's own accused war criminals are never held accountable or even required to have their actions subjected to legal scrutiny.  This is the sort of gross, credibility-destroying hypocrisy that escapes notice by America's media but not by anyone else's.

(2) I've written many times before about the case of Sami al-Haj, the Al Jazeera cameraman abducted in late 2001, encaged at Guantanamo for six years without ever being charged, and tortured, all while being questioned almost exclusively about Al Jazeera's operations, not about Al Qaeda.  As I've noted, his case was an enormous story in the Muslim world -- entailing, as it did, the U.S.'s due-process-free imprisonment and abuse of a journalist -- but received almost no attention in the U.S. media (Nicholas Kristof was a noble exception, writing several times about the case and demanding his release).

A newly released WikiLeaks cable documents the hero's welcome and massive media storm triggered in the Muslim world by al-Haj's eventual release from Guantanamo in 2007.  By contrast, very, very few Americans have any idea who al-Haj is or even know generally that the U.S. imprisoned numerous journalists -- including him -- for years without due process (though they certainly know that Iran and North Korea did that).  The vast disparities in perception between non-U.S. Muslim and Americans are often noted, though it's usually attributed in the American media to the way in which They are propagandized.  Often times, the cause is exactly the opposite:  it's propaganda, to be sure, but not Them who are being subjected to it.

UPDATE/CORRECTION:  Looking over the language of the U.N. Resolution again, I think it's quite possible that The Telegraph -- and therefore me -- got a big part of this story wrong.  There's language in Paragraph 6 defining the scope of the immunity that is easy to overlook because of the strange way it's drafted -- "arising out of or related to operations in the Libyan Arab Jamahiriya established or authorized by the Council" -- that seems to limit the immunity only to those participating in "operations authorized by" the U.N. Security Council:  meaning anyone involved in a U.N. peacekeeping mission (or U.N.-authorized military action) in Libya.  That would seem to exclude Libya's mercenaries from the immunity clause (in an update, Kevin Jon Heller comes to a similar realization).

This is clearly a case where the Obama administration is continuing the Bush administration's insistence that the U.S. (as a non-signatory to the Rome Statute) should be exempt from all ICC prosecutions, but it does not seem -- as The Telegraph and then I indicated -- that the cost of this position here is immunity for Libya's mercenaries.  [The headline and sub-header have been changed to reflect this error; they originally read:  "U.S. shields foreign mercenaries in Libya to protect Bush officials - A U.N. resolution bars war crimes prosecutions for Libya's foreign fighters because Obama officials demanded it"].