After the Bush administration implemented a worldwide torture regime, The New York Times (and many other American media outlets) infamously -- and so very courageously -- refused to use the word "torture" to describe what was done.  Their excuse was that there was a "debate" over whether the authorized tactics were in fact torture, and media outlets should not take sides in that debate.

Earlier today, Ian Hislop, editor of a magazine called Private Eye, published a lengthy article recounting what he claims are anti-Jewish remarks made to him by Julian Assange in a private telephone call (meaning a call in which only Hislop and Assange participated).  Hislop claims that Assange complained that an earlier Private Eye story about a Holocaust-denying, Russian WikiLeaks volunteer was part of an anti-Wikileaks conspiracy orchestrated by several Jewish editors and reporters at The Guardian, with whom Assange has been feuding.

Assange vehemently denies the story as asserted by Hislop -- both its particulars and its general claims.  WikiLeaks, on its Twitter feed, quoted Assange as stating that "Hislop has distorted, invented or misremembered almost every significant claim and phrase"; that the "'Jewish conspiracy' [claim] is false, in spirit and in word. It is serious and upsetting"; and that "we treasure our strong Jewish support and staff, just as we treasure the support from pan-Arab democracy activists and others who share our hope for a just world."

So let's survey what we have:  Ian Hislop is making uncorroborated assertions about his conversation with Assange, while Assange is vehemently denying his claims.  Despite this he-said/he-said conflict -- which no known evidence can remotely resolve -- this is how The New York Times presented the story to its readers in its headline today:

I have no idea whether Assange said some, all or none of what's attributed to him by Hislop.  In my multiple interactions with him, I've never detected even a smidgen of such sentiments; that doesn't mean he didn't say these things:  it merely means what it means.   But The New York Times also has no idea whether Assange said any of this, yet they categorically announce in their headline -- as though it's a proven fact -- that Assange "Complain[ed] of a Jewish Smear Campaign."  Whether that actually happened is very much in dispute, and -- unlike the "torture" controversy, where it was established by decades of case law and the U.S.'s own pronouncements that Bush officials authorized torture -- the NYT has no basis whatsoever for resolving this dispute in favor of the accuser.  While the body of the article does note Assange's denial, the whole story is told from the perspective of Hislop, and the headline constitutes a baseless NYT endorsement of his version.

All of this relates directly to the journalistic biases discussed here yesterday.  Journalists and editors love to endlessly tout their own objectivity, yet their editorial conduct is so often driven by their sentiments and allegiances toward the parties involved in the story (just yesterday, the NYT used the word "torture" to describe Zimbabwe's actions because, it is claimed, "a dozen [] activists had been beaten with broomsticks, metal rods and blunt objects on their bodies and the soles of their feet" -- just as they freely apply the word to anyone that's not the U.S.).  Nobody -- not even the Guardians of the National Security State -- loathes Assange the way that journalists do; recall that they led the way in condemning him and calling for his prosecution for doing what they're supposed to do.  These Beacons of Objectivity thus use entirely different editorial standards -- far more unfavorable ones -- when reporting on him.

In his statement today, Assange suggested the various campaigns to discredit him (including the new one today) are similar in kind to the recently revealed HB Gary schemes to destroy the reputations of his group and its supporters.  About that story, there are several recent developments:  (1) Aaron Barr, the CEO of HB Gary Federal resigned yesterday as a result of his involvement in this scandal; (2) The Washington Post reports today that numerous House Democrats have called for a Congressional investigation into the role played in these schemes by D.C. powerhouse lobbying and law firm Hunton & Williams; and (3) several ethical grievances have now been filed against Hunton & Williams partners involved in these schemes, which -- now that they are forced to respond -- should result in the disclosure of far more detailed information about what that firm did and what happened with these proposals.

UPDATE:  For those in New Mexico and Texas:  I'll be speaking at several events during the week of March 7 which are open to the public; details are here.

UPDATE II:  A commenter points out that Salon's article on this story does much the same thing in its headline as the NYT does, and indeed that's true (Salon: "Julian Assange says 'Jewish' conspiracy behind WikiLeaks smear campaign:  The WikiLeaks founder claims a 'Jewish' conspiracy is attempting to smear his organization").  Obviously, my critique applies equally to that headline.


UPDATE III:  Salon, to its credit, has now changed its headline as follows: 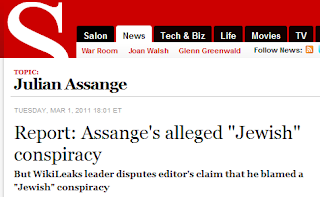