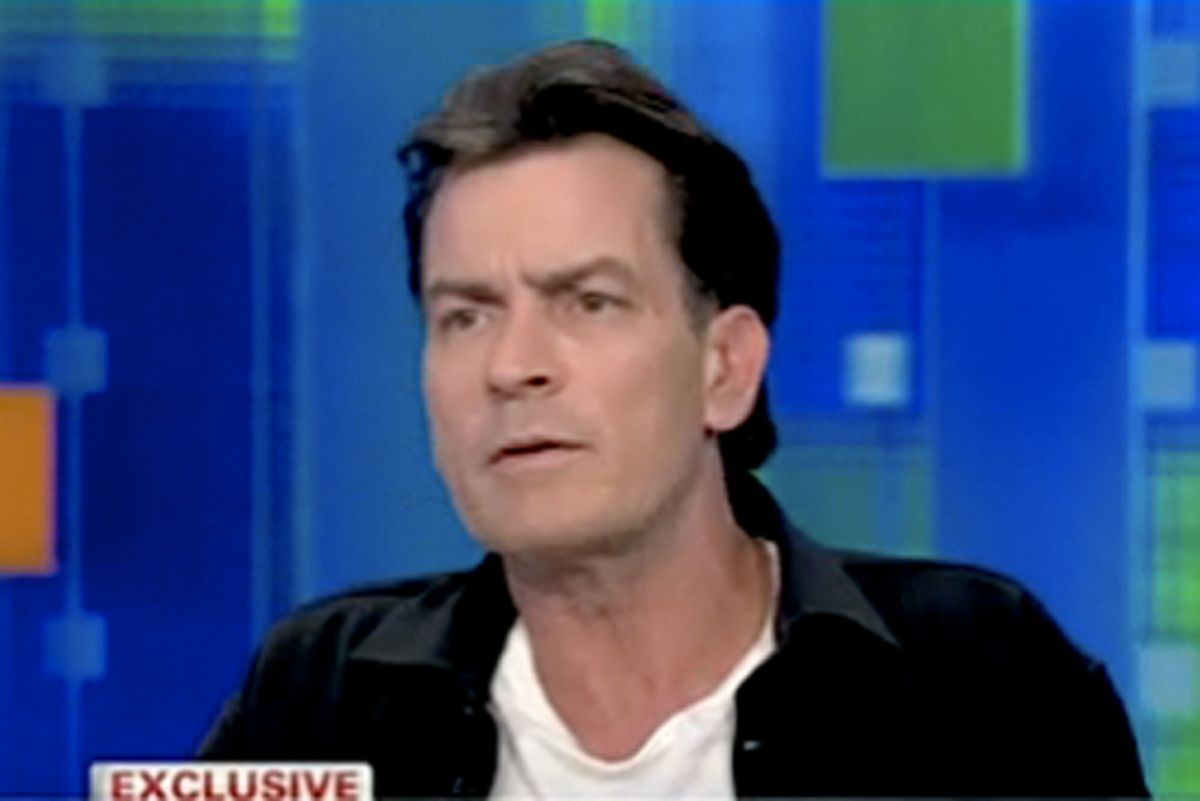 Charlie Sheen may have recently been drop-kicked from "Two and a Half Men," but the man who believes his name "rhymes with winning" is wasting no time at his new job: spouting gibberish on any television or radio show that will have him. Frankly, I don't know where I'm looking forward most to seeing him turn up next, as the star of a very special, hookers and porn stars-studded season of "The Bachelor," as a contestant on "Lurching With the Stars," or the host of the new game show, "Are You More Coherent Than Charlie Sheen?" But as the most highly paid actor in television mulls his next career move,  he is determined to kick James Franco's butt for the coveted title of Most Ubiquitous Man in Show Business. DVRs across the land are firing up in anticipation of his big "20/20" interview tonight, and this week he's already appeared on the "Today" show and, in a surprise move, Monday evening's "Piers Morgan."

On Morgan's show, Sheen, who looks in appallingly bad shape, continued his campaign of dispensing cryptic, LOLcats-worthy sound bites, brandished what he said were the clean results of a recent drug test, asserted that he doesn't know how long he's been drug-free because he's "not being held hostage by AA anymore," and mentioned that he's "riding on a mercury surfboard." And in the understatement of the year, Morgan suggested that the only reason Sheen's show is on hiatus now is because "of you and your private life," as if Sheen has somehow been conducting his hotel room trashing, open letter to his bosses-writing exploits with the gentlemanly soul of discretion. "I don't really get what the problem has been here," lamented Piers, who with an apparent touch of envy noted, "You seem to be leading a rock star life."

I've got to say, a lot of us didn't get it in the first place when CBS hired a guy with a history of dropping in and out of rehab, who served two years' probation in the mid-'90s for assaulting his girlfriend. And there was some wonderment during the run of "Two and a Half Men," when the network and its producers sure seemed to have a high threshold for charges of domestic abuse and compelling allegations of drug use and paying for sex -- all of which are not just private lifestyle choices but illegal actions.

If a guy wants to party and keep company with a revolving crew of companions, Morgan and Sheen are correct that it's nobody's business. If you show up for work and you're not beating anybody or breaking any laws, your recreational pursuits are your own. If your life is, in Sheen's words, "perfect. It's awesome. Every day is just filled with just wins. All we do is put wins in the record books. We win so radically in our underwear before our first cup of coffee, it's scary," hey, rock on radically in your underwear, sir.

But with his increasingly loopy, seemingly determined to self-destruct behavior, Sheen has dragged his television production team, his audience, his recently resigned publicist, and anybody else within earshot into his alleged private life. Clearly, he feels the need to defend himself right now because some people might take hotel room rampages and calling your boss a "contaminated little maggot" the wrong way. But even if he's only on, as he says, "a drug called Charlie Sheen," there's no denying that his gung ho talk show couch tour isn't doing anything to assure the world that we just need to look at this train wreck from Charlie Sheen's perspective for it all to make sense. And if Piers doesn't get that this story stopped being private a long time ago, or that this isn't "rock star" behavior but a highly combustible, downright scary situation for the actor and anybody under his roof, he might just be crazier than Sheen himself.