Fox reporter in Wisconsin victim of yet another "union thug" attack

A violent assault or a slight jostling? Fox reports, and decides 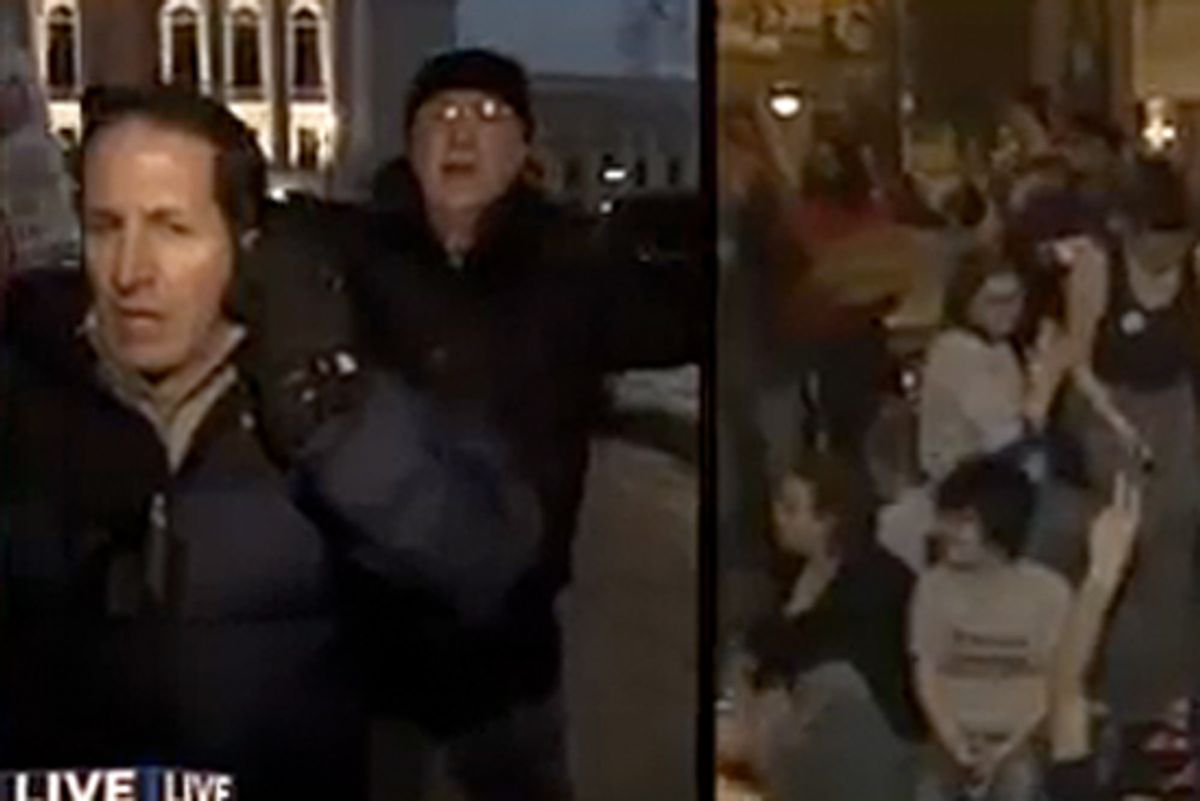 Most Americans have decided that they support the collective bargaining rights of public employees, and the peaceful demonstrations in Wisconsin have inspired liberals across the nation. Which means, of course, that Fox -- the official communications arm of the conservative movement -- has been desperate to paint the entire protest as violent and hateful. (This is the general Rovian principle of political messaging in action: Claim your opponents are the ones truly guilty of whatever they accuse you of being or doing.)

Thus far their best effort was video of a guy in Washington, D.C., shoving a camera. But one intrepid Fox reporter is spending his every minute of airtime crafting and expanding on an alternate narrative of the Wisconsin protests themselves. In Mike Tobin's reports from Madison, union thugs and their allies have threatened to break his neck, and even already physically attacked him. Tobin can see the "hate in their eyes." Here's the thrilling neck-threatening incident:

But Raw Story has non-Fox footage from LiveLeak of the actual "punch" that Tobin claims to have suffered. He got jostled, basically:

It is probably pretty stressful to be surrounded by shouting protesters who dislike you, I'll give Tobin that. And that probably helps explain why Tobin's reports tend to be about himself, and Fox -- how he's faced down threats and violence and the sheer overpowering hatred of these protesters -- and not really about what is actually happening in Wisconsin, and why. The demonstrators are obviously hostile to Fox, but that's because Fox is the opposition. Not in a metaphoric sense, but quite actually. It is an organization that does leg work for the movement that seeks to cripple unions.

Still. I see chanting and a jostle. (Not that I condone unwanted jostling! No one should be jostled against their will.) If this is the best our contemporary union thugs can do at violent intimidation, it's no wonder that America is falling behind.

Tobin has tried to downplay the "punch" in later appearances -- presumably because he knows full well it was not a serious incident -- but that doesn't matter. He's a right-wing martyr now, like it or not. Another victim of liberal cruelty against peace-loving conservatives.