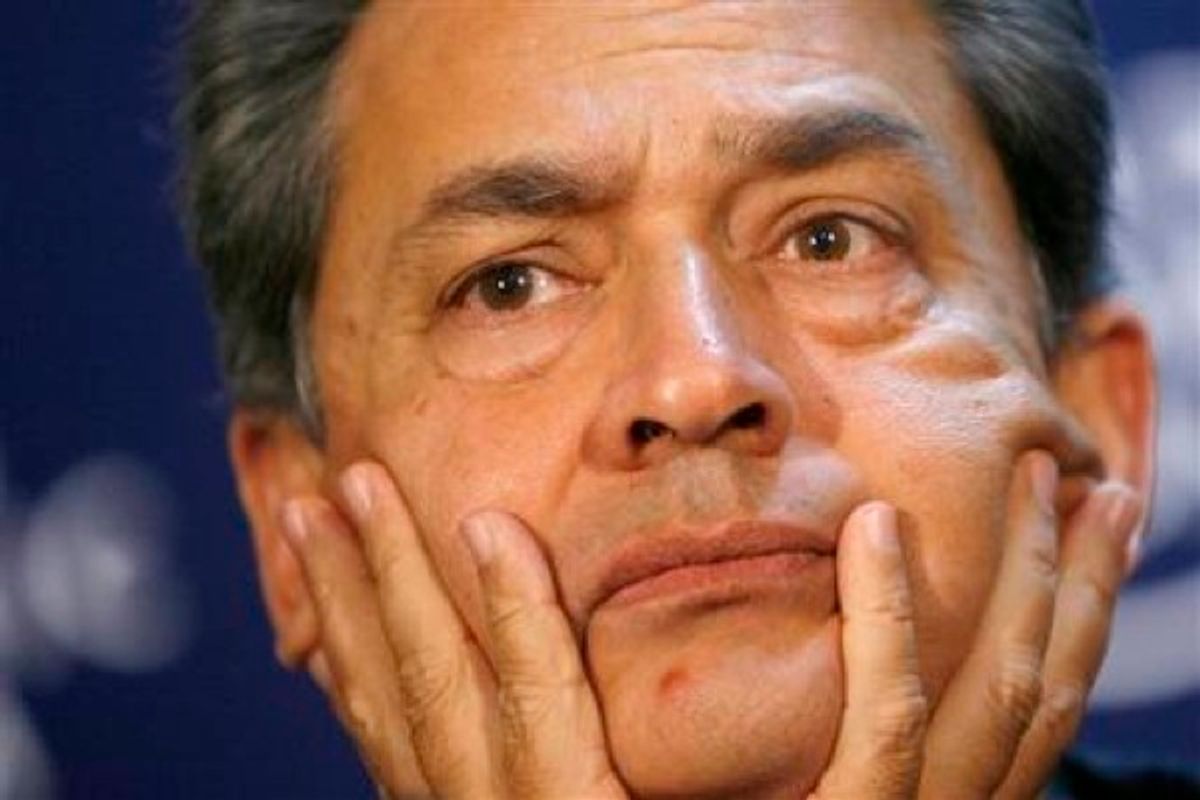 FILE - In this Jan. 3, 2009 file photo, Rajat Kumar Gupta,Chairman of Global Fund to Fight AIDS, Tuberculosis and Malaria, listens to a statement, during a session at the World Economic Forum in Davos, Switzerland. Federal regulators have charged Gupta, a Goldman Sachs former board member with insider trading, saying Tuesday, March 1, 2011, he provided confidential information to the central figure in a major hedge fund probe.(AP Photo/Keystone/Alessandro Della Bella, file) (AP)
--

Federal regulators have charged a former Goldman Sachs board member with insider trading, saying he gave confidential information to the key figure in what prosecutors call the largest hedge fund insider-trading probe ever.

The Securities and Exchange Commission announced the civil charges against Rajat Gupta on Tuesday. The SEC said Gupta told Raj Rajaratnam, founder of the Galleon Group hedge fund, that Warren Buffett's Berkshire Hathaway planned to invest $5 billion in Goldman before it was publicly announced at the height of the financial crisis.

Gupta also is charged with giving Rajaratnam confidential earnings information from Goldman and Procter & Gamble. Gupta served on Goldman's board from 2006 until last May. He was a P&G board member from 2007 until resigning Tuesday, after the charges were announced.

Prosecutors have said Rajaratnam generated profits of more than $50 million after getting inside information about public companies' earnings and plans for mergers and acquisitions. The information on Goldman made Rajaratnam's funds $17 million richer, the SEC said. The P&G data created illegal profits of more than $570,000 for Galleon funds managed by others, the SEC said.

"Gupta was honored with the highest trust of leading public companies, and he betrayed that trust by disclosing their most sensitive and valuable secrets," SEC Enforcement Director Robert Khuzami said.

Gupta's attorney, Gary Naftalis, called the allegations "totally baseless." Naftalis noted that the SEC isn't accusing Gupta of trading in the stocks of the companies himself or sharing profits with Rajaratnam on the trades. Gupta actually lost his $10 million investment in a hedge fund managed by Rajaratnam at the time he allegedly passed on the information, Naftalis said.

The SEC's complaint lays out, in moment-to-moment details, its allegations of how the insider trading occurred. It notes how often the two men spoke in September 2008, when Goldman was negotiating a deal with Buffett's investment firm.

At the time, Wall Street was reeling from the failure of investment bank Lehman Bros. Goldman CEO Lloyd Blankfein told the bank's board of a possible investment by Berkshire on Sept. 21. Over the next two days, Rajaratnam's funds bought 120,000 shares of Goldman. He picked up one-third of those shares while on the phone with Gupta, the SEC said.

On Sept. 23, Goldman's board agreed to the Berkshire deal during a call that ended at 3:53 p.m. Gupta called Rajaratnam once the call ended. In the minutes before the market closed, Rajaratnam bought 175,000 more Goldman shares. Rajaratnam sold those shares the next day. His profit: $900,000.

Goldman declined to comment Tuesday on the charges. When Goldman appointed Gupta to its board of directors in 2006, the investment bank's release said that Gupta would serve on the Audit, Compensation and Corporate Governance and Nominating Committees of the Board.

Rajaratnam, a one-time billionaire who is free on $100 million bail, has pleaded not guilty to criminal securities fraud charges. He has maintained that he traded only on information that was already public. He is scheduled to go on trial next week in a probe that has resulted in criminal charges against more than 25 people. Of those, 19 have pleaded guilty to charges, with the majority of them cooperating.

Jim McCarthy, a spokesman for Rajaratnam, declined to comment on the civil charges against Gupta.

The case against Gupta will be heard by an administrative law judge at the SEC. That proceeding will determine whether Gupta should pay restitution and civil fines and whether he should be barred from serving as an officer or director of a public company, the SEC said.

Gupta, 62, of Westport, Conn., is also a board member of AMR Corp., the parent company of American Airlines and chairman of Genpact Ltd., a Bermuda-based management contractor that is traded on the NYSE. And he is on the board of Harman International Industries Inc., a consumer electronics company based in Stamford, Conn.

Gupta's list of achievements is long. A guest of the White House at President Obama's first state dinner held for the visiting Prime Minister of India, Gupta is one of India's most high-profile immigrants.

He came to the Harvard Business School in 1971 and joined the blue-chip consulting firm McKinsey right after graduation. Gupta became McKinsey's first non-Western head when he became worldwide managing director of the firm from 1994 to 2003.

"Prosecutors are going after the biggest heads and now it has infiltrated the largest brokerage and hedge funds around," said Andrew Stoltmann, a Chicago securities attorney who has handled insider-trading cases. "We are seeing the reaches of insider trading at the highest level."

The criminal securities fraud against Rajaratnam, who has both U.S. and Sri Lankan citizenship, was announced in October 2009 by federal prosecutors in Manhattan. Prosecutors described it as the largest hedge fund insider-trading prosecution in history. It was also described as the first time investigators made extensive use of wiretaps in an insider-trading probe. The investigative tool is more traditionally used in drug and organization crime probes.

Late last year, prosecutors revealed that the Rajaratnam investigation had resulted in an expanded probe focusing on those in the securities industry who provide insider information about public companies to hedge funds, but disguise the information as the product of research.

If convicted, Rajaratnam faces up to 185 years in prison. Potential penalties in insider-trading cases can sound ominous when the statutory limits are stacked together. But they can shrink dramatically when the cases are resolved.

Associated Press Writers Larry Neumeister and Rachel Beck in New York and Dan Sewell in Cincinnati contributed to this report.