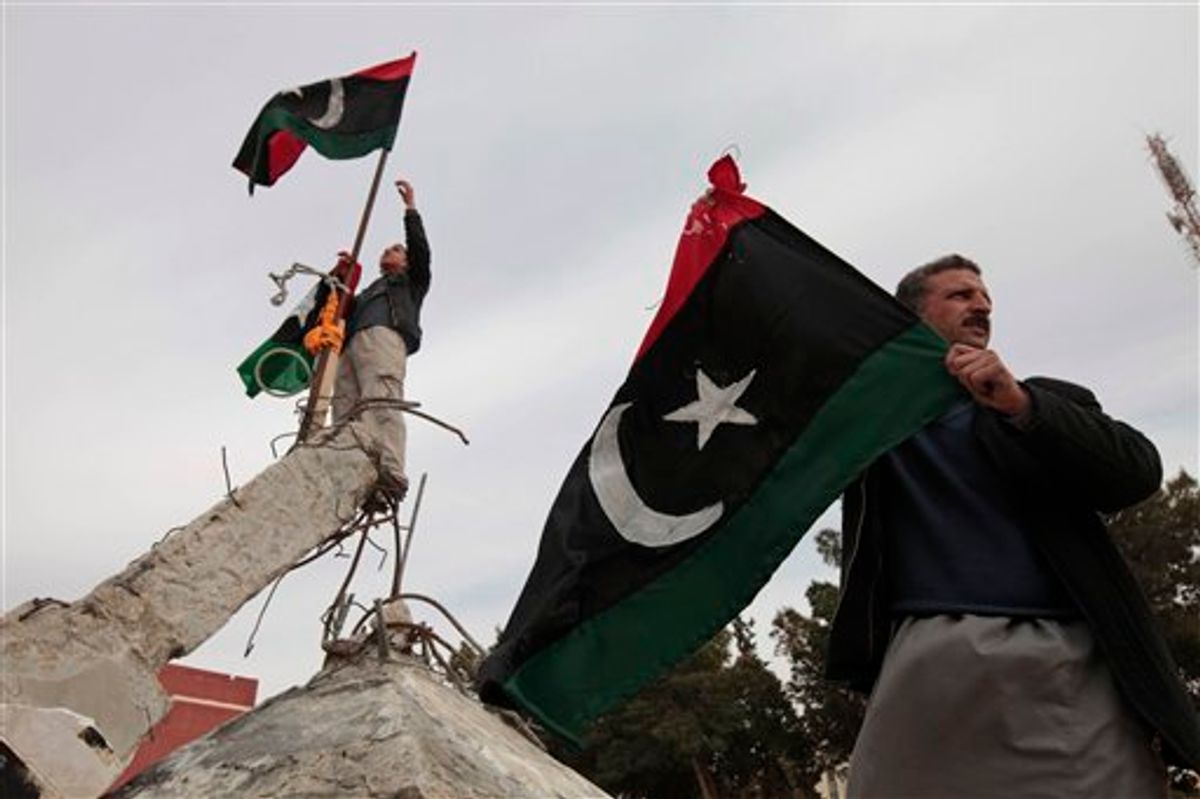 Libyans wave Libyan monarchist-era flags on a monument in the southwestern town of Nalut, Libya, Monday, Feb. 28, 2011. The town is currently in control of the Libyan anti-government forces. (AP Photo/Lefteris Pitarakis) (AP)
--

Defense Secretary Robert Gates says any military action in Libya must be carefully weighed because it will have broad consequences on the region and the U.S. military, including the effort in Afghanistan.

Gates says he ordered two ships into the Mediterranean, including the amphibious assault ship USS Kearsarge. And he is sending 400 Marines to the Kearsarge to replace some of the troops that left the ship recently to go to Afghanistan.

Military leaders are saying that putting a no-fly zone in place over Libya is a complex task, that would require taking out that country's air defenses.

Libya is at risk of collapsing into a "protracted civil war" amid increasingly violent clashes between government forces and those opposed to leader Moammar Gadhafi, Secretary of State Hillary Rodham Clinton warned Tuesday.

"In the years ahead, Libya could become a peaceful democracy, or it could face protracted civil war," she told the House Foreign Affairs Committee. "The stakes are high."

She told Congress that the U.S. must lead an international response to the crisis, including expanding already tough financial and travel sanctions against Gadhafi, his family and confidants and possibly imposing a no-fly zone over Libya. "The United States continues to look at every single lever it can use against the Gadhafi regime," she said.

She spoke as Gadhafi and forces still loyal to him sought to protect their remaining strongholds in and around the capital of Tripoli and take back rebel-held areas in the east. She said U.S. officials were aware that defecting military officers were attempting to organize fighters to defend areas they hold and "even try to take Tripoli away from Col. Gadhafi."

But while Clinton said that protective military air cover in Libya is a possibility, she and the top U.S. military commander in the Middle East said it would be challenging and there would be drawbacks. "There are arguments that would favor it, questions that would be raised about it, but it is under active consideration," Clinton said.

Testifying before a separate panel, Marine Gen. James Mattis, head of U.S. Central Command, said the military would have to take out Libyan air defenses in order to establish a no-fly zone there.

He said a no-fly zone above the African nation would deter any attempt by Gadhafi to launch bombing raids on his own citizens as they mass for anti-government protests. But Mattis said it would require military action to establish the no-fly zone, something he acknowledged would be difficult.

International partners the United States would need for such patrols are divided about the idea, and while the U.S. would probably be the main participant in any such network, no U.S. official has publicly endorsed it.

Aside from logistical concerns, Clinton said outside military intervention might also compromise Gadhafi's opponents who do not want to be seen as serving outside forces.

"We are also very conscious of the desire by the Libyan opposition forces that they be seen as doing this by themselves on behalf of the Libyan people, that there not be outside intervention by any external force, because they want this to have been their accomplishment," Clinton told the house Foreign Affairs Committee. "We respect that."

Mattis told the Senate Armed Services Committee that ships have been dispatched through the Suez Canal into the Mediterranean Sea, to be ready for any assistance or other actions President Barack Obama should order.

He added that it is too early to say how the uprisings will turn out.

"We don't want to see this change slide into a new form of authoritarianism," Mattis said. "So while there is both opportunity and danger, it requires unrelenting engagement by our nation. The central challenge for us, I believe, is how to make common cause with our friends throughout the region."

Sen. John McCain, R-Az., said the unrest rocking countries across the Middle East provides an unprecedented opportunity to support the people there in shaping a new order that is more consistent with U.S. interests and values.

Clinton's comments came in testimony at a hearing about the State Department and foreign operations budget, which congressional Republicans want to slash, and she said Libya was an example of why that funding should not be cut. Donna Cassata contributed to this report.