The stock market crash hammered state finances. But thanks to Obama, the bottom line is much better now 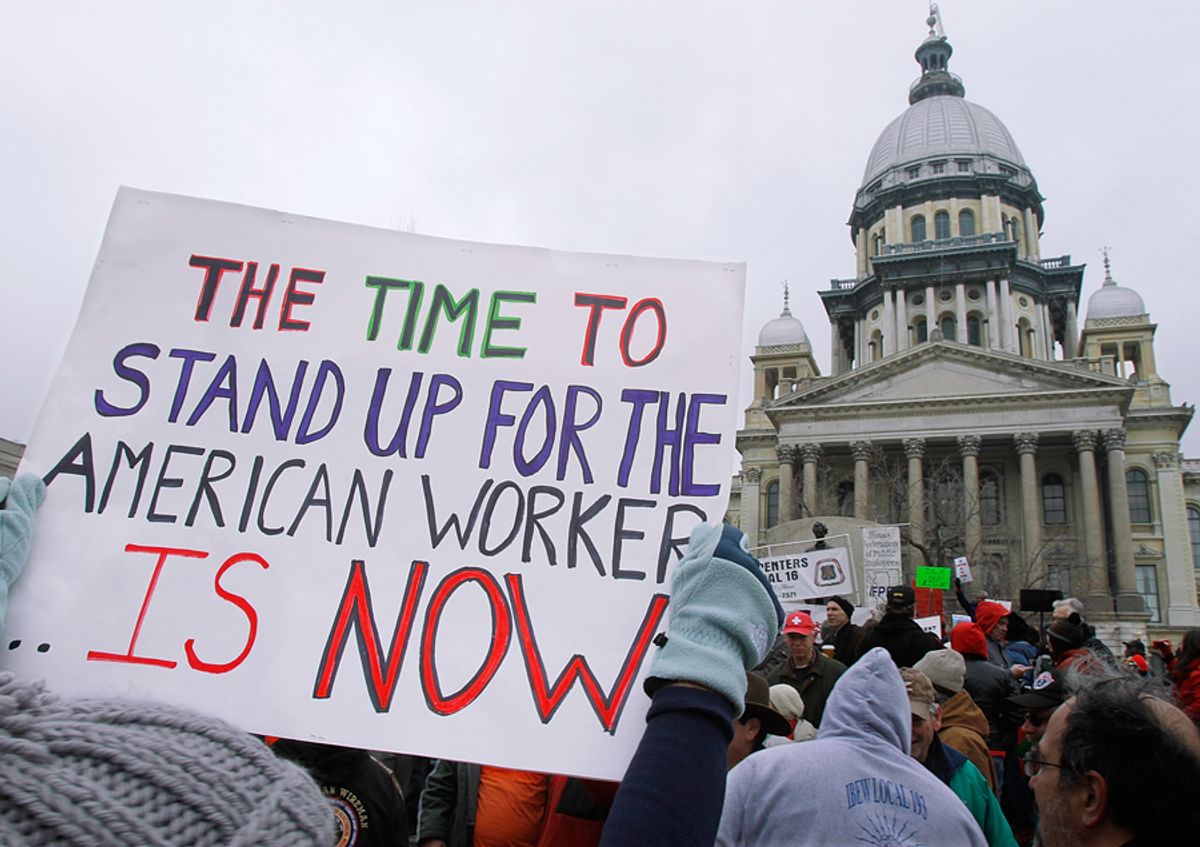 "The Origins and Severity of the Public Pension Crisis," a new paper from economist Dean Baker, co-director of the left-leaning Center for Economic and Policy Research, makes a decent argument that the so-called "crisis" isn't as bad as the Republican governors busily busting unions all across the United States would have us believe.

Baker shows that the bulk of the predicted shortfalls auguring long-term trouble for government worker pension funds can be attributed to the sharp drop in the stock market between 2007 and 2009. Assuming decent economic growth, future liabilities, as measured against projected future GDP, are, in Baker's view "manageable."

The likelihood that Baker's paper will change any minds is poor. The fight over public sector unions doesn't come down to the question of how to balance state financial ledgers -- instead, it's all about political power. Unions support Democrats; therefore Republicans seek to crush unions. Republicans are especially aggrieved by public sector unions, which they believe unfairly use taxpayer funds to pursue agendas that conflict with the conservative mandate.

Baker's paper inadvertently proves this point, in a section where a long table totes up the data for "Funding Levels and Liabilities for Major State Pension Funds." The key column is "Unfunded Liability as a percent of Future State Income" as projected over the next 30 years.

Some states are in worse shape than others: Mississippi ranks high at .36 percent while Ohio tops the list at .47 percent. But Wisconsin? 0.00 percent. The actuarial value of Wisconsin's pension fund assets exceeds the state's potential liabilities, assuming no major disruptions in expected economic growth in decades to come. This is worth emphasizing: The battle over public sector unions is fiercest in a state where pension fund liabilities simply aren't a long-term problem.

Again, pointing this out isn't likely to change any minds, because the fiscal details aren't the deciding issue motivating political passions. So let's move on to another interesting item that jumps out of Baker's report: the reality of how important stock market appreciation is when calculating a state's longterm fiscal health.

If there's one thing that the Obama administration, in combination with the Federal Reserve, have truly succeeded at over the last two years, it has been in rescuing the stock market from the great crash of 2008. Republican pundits do their best to ignore this, because it is embarrassing for them to explain why the market keeps ratifying White House economic policy. But liberals see it as a downright moral failure -- a sign that White House priorities are more focused on Wall Street and the investor class than on Main Street.

But here's another way to view it: A healthy, growing stock market is good news for retirement funds of all kinds, but it is particularly good news for state governments which have invested huge sums of taxpayer money into public sector pension funds. By encouraging stock market asset appreciation, the Obama administration is helping states -- and workers -- in a profound way. Those horrible "shortfalls" everyone has been making such a big deal of are already in retreat.

[I]t is worth noting that the size of the shortfall in many of these funds has likely already been reduced as a result of the fact that the stock market has continued to recover from its downturn in 2008 and 2009. On July 1, 2010, the S&P 500 was already more than 11 percent higher than its July 1, 2009 level (from 987 on July 1, 2009 to 1101 on July 1, 2010). Most funds use the stock market's closing value at the end of the fiscal year as the basis for determining the valuation of their assets. Of course they also use an average, so the valuation would not simply reflect the market value at the end of the fiscal year. However, with the market having already risen substantially from its low (the S&P 500 had risen another 19 percent to 1293 by January 10, 2011), it is likely that pension valuations based on current and future market levels will show smaller shortfalls. In other words, a substantial portion of the shortfalls that were reported based on 2009 valuations have likely already been eliminated by the rise in the market.