Where things stand: U.S. imposes sanctions on Libya, says "It's time for Qaddafi to go"

A glance at the U.S. response to Libya: What has been said, what is being done, and what will be considered 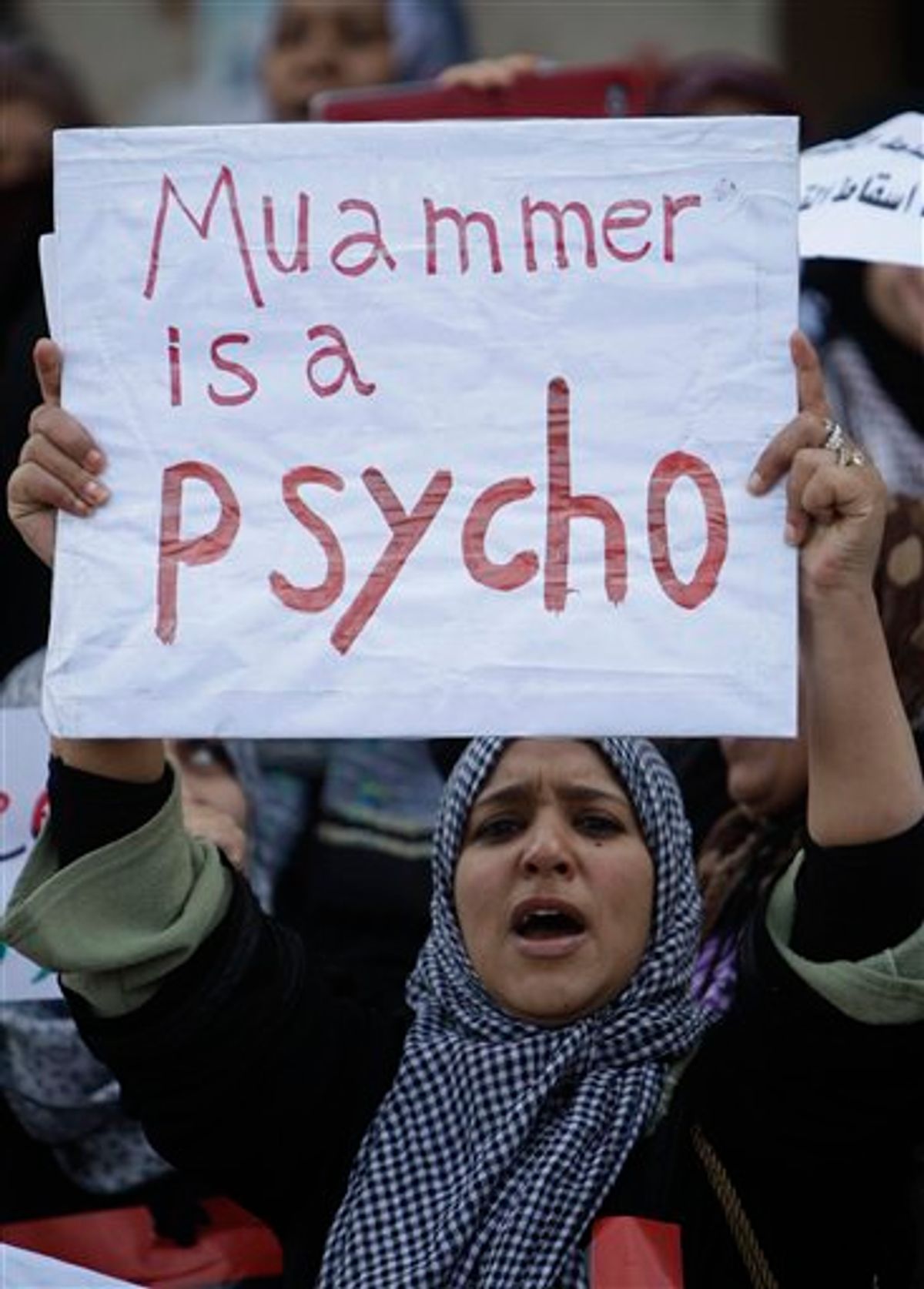 A Libyan protester holds up a sign as she shouts slogans against Libyan leader Moammar Ghadafi during the demonstration before Friday prayers, in Benghazi, Libya, on Friday Feb. 25, 2011. Militias loyal to Moammar Gadhafi opened fire on protesters streaming out of mosques in the Libyan capital on Friday, demanding the regime's ouster, witnesses said, reporting at least four killed. Across rebellious cities in the east, tens of thousands held rallies in support of the first Tripoli protests in days. (AP Photo/Hussein Malla) (AP)
--

When we updated our overview of Middle East crackdowns last week, the situation in Libya was still in a state of flux, and the United States had vowed to "hold the Libyan government fully responsible" but had not yet announced any concrete steps to do so. Much has changed since -- here's a look at what the United States has said, has done and is still considering.

What the United States has said:

The United States has begun calling publicly for Libyan dictator Col. Muammar Qaddafi to step down. The first sign of this came over the weekend, when on a call with German Chancellor Angela Merkel, President Obama stated that "when a leader's only means of staying in power is to use mass violence against his own people, he has lost the legitimacy to rule and needs to do what is right for his country by leaving now," according to a readout of the call.

Secretary of State Hillary Clinton voiced that position again today, calling specifically for Qaddafi to go "now, without further violence or delay." She told the UN Human Rights Council that the United States has been "reaching out" to the newly formed opposition government working to oust Qaddafi and is prepared to "offer any kind of assistance that anyone wishes to have from the United States."

The latest statements mark a shift since last Friday, when State Department spokesman P.J. Crowley stated that "what happens to the leadership of Libya is up to the Libyan people," and "it is for them to decide who should leave." President Obama in particular has faced criticism for failing to speak up sooner to personally condemn the actions of the Libyan government.

What the United States has done so far:

The U.S. announced it would be closing the American embassy in Libya and imposing unilateral sanctions. The announcement came just hours after the United States evacuated a final group of American citizens and embassy personnel on Friday.

"There has been great haste in moving to the point where we are today," White House Press Secretary Jay Carney said, defending the timing of U.S. sanctions against the Libyan government.

Those sanctions included a freeze on the assets of the Libyan government, the Qaddafi family and other high-level Libyan officials. It also ordered the suspension of "all existing licenses and other approvals for the export of defense articles and services to Libya." (See the State Department's responses to us when we asked about the licensing of exports to Egypt and other Mideast countries that engaged in suppression of protests.)

In coordination with the United States and the United Nations, the European Union announced on Monday it would be imposing its own sanctions. The UN also instructed the International Criminal Court to decide whether the Libyan government committed crimes against humanity.

The United States and its European allies have yet to impose a no-fly zone over Libya, though Secretary Clinton has said that it is "an option we are actively considering" and is under discussion. The BBC reported today that the UK is working on a plan to impose it.