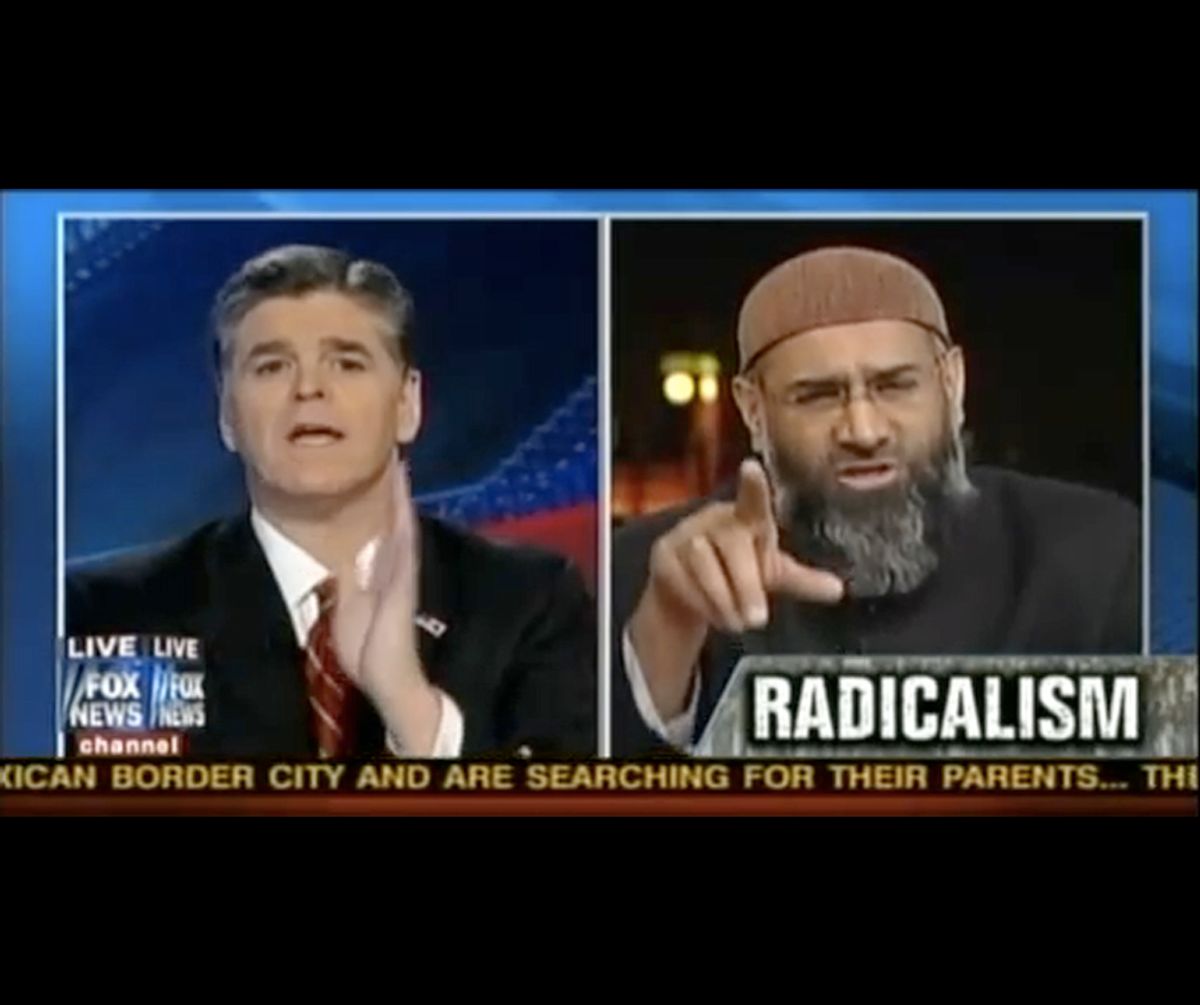 On Thursday, the radical Muslim and veteran provocateur Anjem Choudary plans to hold a demonstration in front of the White House calling for an extreme form of sharia to reign in America.

Whether the protest actually goes forward -- there's a real chance it won't, if Choudary's past stunts are any guide -- doesn't really matter. Choudary, who is known for applauding terrorism and calling for stonings of gay people and the overthrow of democratic governments, has already logged several appearances on Fox and CNN, generated a bunch of articles in the right-wing press, and even prompted a member of Congress to demand that he be banned from the country. All that in the last month.

Choudary is a London-based preacher who has over the past decade become the face of radical Islam in the British press -- especially in the tabloids, and even more especially the right-wing papers owned by Rupert Murdoch's News Corp. -- despite having no religious credentials and virtually no public support. In fact, according to those who have tracked his career in Britain, Choudary is wholly a press creation.

"He's a media whore," says Mehdi Hasan, a senior editor at the New Statesman who has covered Choudary. "There are real Islamist groups that can get crowds together but his is not one of them. He doesn't have the numbers to make good on his claims. What he does have is a media that's very happy to play the game with him."

Now, Choudary, 43, is using the same formula -- making deliberately offensive statements and trumpeting plans for provocative demonstrations -- in the United States, where the media has proved all too willing to accommodate him. He can be understood as the Muslim analogue of Terry Jones, the obscure Florida preacher who created an international controversy last year with plans for a "Burn the Quran Day." He is a radical with minuscule public support, but one who can, given enough free airtime, do real-world damage.

Last month on Fox Sean Hannity had a sparring match with the preacher that ended with Hannity calling him "one sick, miserable, evil SOB." (It's worth noting that Fox has the same parent company, News Corp., as some of the U.K. tabloids that obsessively cover Choudary.) Here's a taste of the exchange:

Two weeks later, Choudary was back on the network, where an angry Gretchen Carlson told him that "I can tell you one thing, Americans don't want sharia law." Adam Serwer has argued that Choudary is, for Fox, a "cartoonish buffoon who can be counted on to confirm every stereotype about Islam and Muslims."

But it's not just Fox. Late last year Eliot Spitzer had Choudary on CNN and heroically derided him as a "violent and heinous terrorist." In February, Spitzer hosted him again to argue that the revolution in Egypt was an "Islamist uprising." Choudary has also been on programs with ABC's Christiane Amanpour and CNN's Fareed Zakaria.

So where did Choudary come from? Born and raised in Britain, his rise to prominence came as the right-hand man of Omar Bakri, a founder of the extremist group Al Muhajiroun. Like Choudary today, Bakri was a press-hungry provocateur, but he also played a role "in the radicalization of some young men," according to the BBC. Bakri left the U.K. for Lebanon after the 7/7 bombings in 2005. The British government has since barred him from re-entering the country, and Bakri has been charged in Lebanon with forming a militant group to undermine the government there.

In Bakri's absence, Choudary became the leader of Al Muhajiroun's successor group, Islam4UK. Both were proscribed in 2010 under a British law that allows for groups to be banned if they "unlawfully glorify the commission or preparation of acts of terrorism."

When I spoke to Choudary Tuesday, he refused to discuss how many followers he had, beyond claiming that he can attract 150 people to his lectures. "I'm not going to give you details of our administration," he said. But according to Inayat Bunglawala, a Muslim commentator who is involved in combatting extremism in Britain, Choudary's record for getting large numbers of people to turn out to events is thin. Bunglawala points to a 2009 demonstration at a parade in the town of Luton in which Choudary and his cohort held signs assailing British troops returning from Iraq as "butchers" and "terrorists."

Choudary and some of his followers had advertised the event by leafletting for a week among the 20,000-strong Muslim population in the town, says Bunglawala, who has closely tracked Choudary's career. But the turnout was vanishingly small. "Literally only 20 people showed up and yet they got the front pages of just about every right-wing tabloid the next day. Even the BBC gave them a lot of coverage on that." Bunglawala observes: "It's almost a symbiotic relationship between Choudary and the right-wing papers."

Choudary also has a long history of publicizing demonstrations that never actually happen. In 2009, for example, he planned a "March for Sharia" in central London that drew widespread press attention. The promotional effort included Photoshopped images of what Buckingham Palace and Trafalgar Square would look like under Choudary's vision of the caliphate, with minarets and the like. But at the last minute, he canceled the event, claiming threats from right-wing groups.

None of this has stopped the tabloids from regularly calling Choudary to weigh in on pretty much anything in the news. There is, for example, this typical lead from a recent Daily Star piece: "Hate preacher Anjem Choudary last night urged a Muslim uprising against the royal wedding ... He said it would be against Islam for Muslims to celebrate the nuptials."

Choudary does his part by making himself extremely easy to reach; his mobile phone number is posted all over his website and he responded to my e-mail seeking an interview in just a few hours. He even once agreed to have a bull session over milkshakes with Vice Magazine, which noted his favorite flavor is chocolate.

Now, in advance of the planned "Shariah4America" demonstration in Washington, Choudary is following a familiar script. His group has posted images online of the White House with minarets and the Statue of Liberty wearing a veil. It's not hyperbole to say that everything he does is for media consumption. When I asked him about a 2003 episode in which Al Muhajiroun unveiled posters hailing the Sept. 11 hijackers as the "Magnificent 19," Choudary was candid: "It was a media ploy in order to attract the attention of the media and the general public about why such things take place."

Whether or not the demonstration actually happens Thursday, the Choudary phenomenon is at least as much about the laziness -- and, arguably, irresponsbility -- of the media as it is about Islam. Says terrorism analyst Daveed Gartenstein-Ross: "One lesson from our experience with would-be Quran burner Terry Jones is that when fringe or relatively fringe figures ... are given a great amount of media exposure, it generally increases their power rather than diminishing it. Unfortunately, the media either has not absorbed that lesson, or else does not want to."