Is Mike Huckabee going to get away with this? 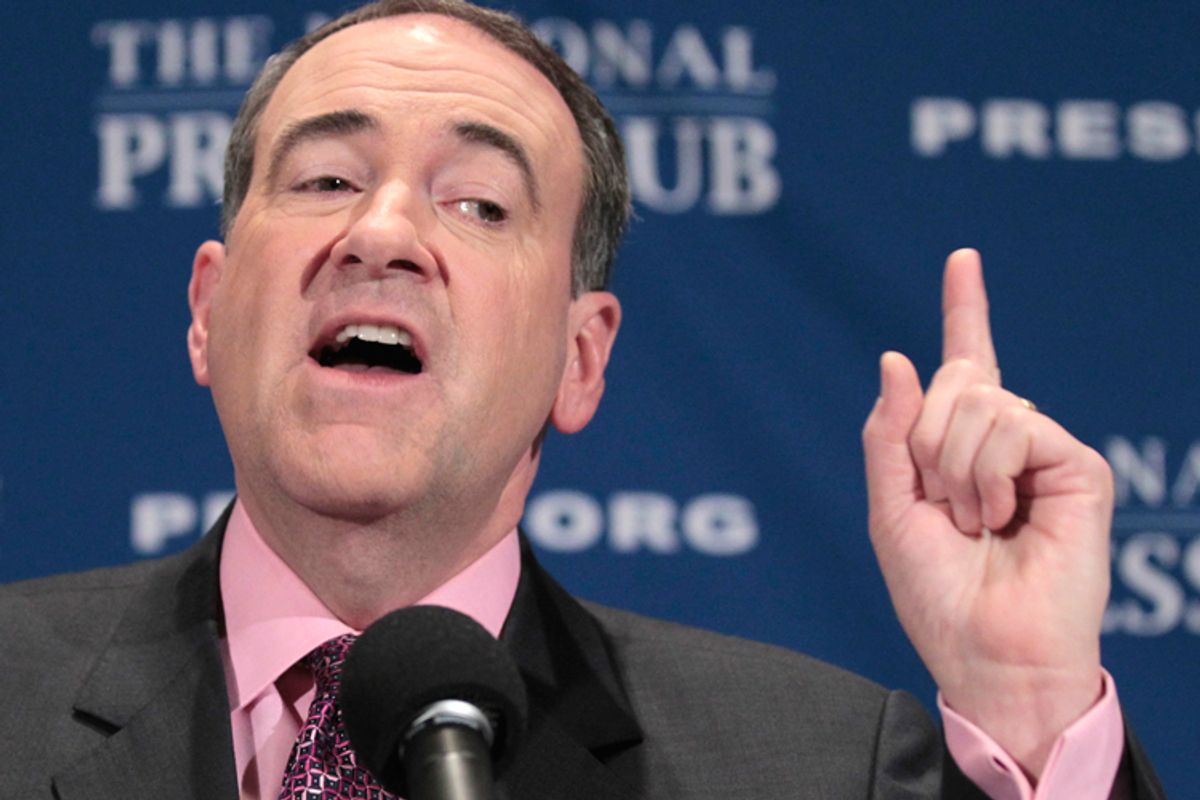 In a radio interview on Monday, Mike Huckabee said that President Obama was a) raised in Kenya; and b) as a consequence of this Kenyan upbringing, probably indoctrinated with anti-Western views by his father and grandfather and their stories about the Mau Mau uprising of the early 1950s.

When the comments made national news on Tuesday, Huckabee, through a spokesman, claimed that he'd "simply misspoken" and that he'd "meant to say the president grew up in Indonesia." This explanation made little sense, because Huckabee hadn't merely said the word "Kenya" -- he'd discussed at length and in detail some of the "troubling" implications of Obama's Kenyan upbringing. If he'd merely misspoken, there would have been no talk of the Mau Mau uprising.

You might think this episode would seriously diminish Huckabee's standing on the national political stage. Certainly, it's easy to make the case that it should. As I noted yesterday, Huckabee has now demonstrated that his critique of the president's conduct of foreign policy is rooted in his belief in something that is utterly and laughably untrue. You might expect this level of ignorance from a talk radio host or even a House backbencher -- but from a man who, if he runs, could be the favorite for next year's Republican presidential nomination?

There's also the matter of how Huckabee's comments enable birther sentiment. As Jonathan Bernstein explained, it doesn't matter that Huckabee didn't literally endorse the idea that Obama wasn't born in the United States; his comments encourage the view "that Barack Obama isn't a real American" -- a sentiment that is so strong on the right now that a majority of Republicans essentially endorsed birtherism in a recent poll.

And yet, a day later, it's beginning to look like Huckabee will walk away from this relatively unscathed. Sure, he's taken plenty of heat, but he's got his defenders, too. (Take Politico's Ben Smith, who bought the Huckabee line about misspeaking and then penned a defense of "post-birtherism.") So Huckabee will probably be able to stick to his script of simply saying "Kenya" when he meant "Indonesia," then dismiss anyone who dwells on the issue as a politically motivated liberal. And in a few weeks, maybe he'll say something unexpectedly gracious about the Obamas -- as he has done several times recently -- validating the benefit of the doubt that plenty of media members are still willing to give him. He'll still be the "likable" Republican.

This, in turn, should prevent any significant damage to Huckabee's standing within the GOP. As the recent birther poll demonstrated, there's no real risk that Huckabee's actual comments will cause a backlash among Republicans. The only threat is that the comments cause such a sustained firestorm that Republicans begin to see Huckabee as they increasingly see Sarah Palin: someone they like but won't back for president. Assuming Huckabee stops spouting theories about the roots of Obama's anti-Western philosophy, he'll probably be fine.

Whether he'll actually run for president in 2012 is anyone's guess right now. If he does, I doubt this episode will hurt him. The Republican field is -- for now -- unusually thin: Mitt Romney, Tim Pawlenty, Newt Gingrich, Rick Santorum, Jon Huntsman, Herman Cain and maybe Mitch Daniels. There was plenty of room for Huckabee before this week, and I'd guess there's just as much now.

If he does run and does win the GOP nomination, his comments will be old news by the general election, and presumably he'll have found a succinct way to bat down questions about them by then. Maybe they could be used to help demonstrate a pattern of appalling ignorance -- but on their own, they may not mean much.