Dazzling Palme D'Or winners like "Uncle Boonmee" are ignored by Hollywood's biggest awards. But why? 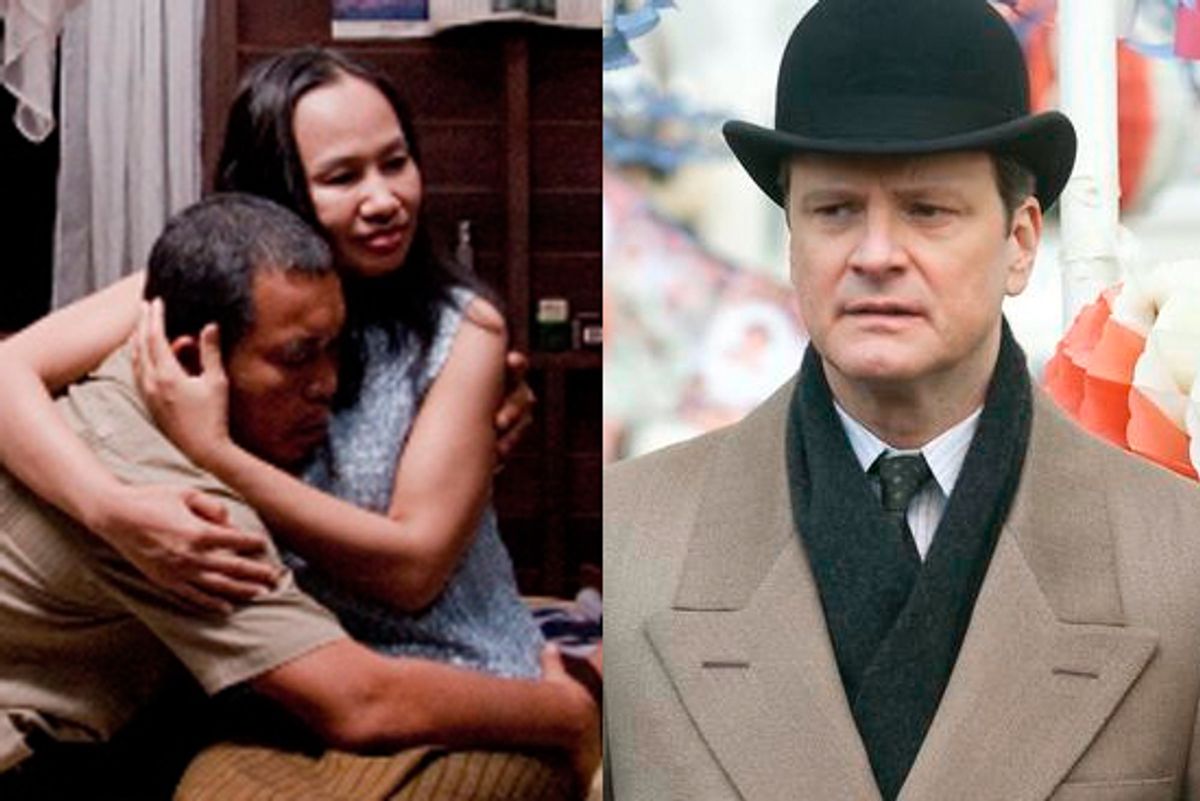 Stills from "Uncle Boonmee" and "The King's Speech"
--

What does feel-good Oscar winner "The King's Speech" have in common with a movie from Thailand called "Uncle Boonmee Who Can Recall His Past Lives," which opens this week in New York and Los Angeles? I could make stuff up -- they both fit the definition of a narrative feature film, they're about the same length, and the writers of both films were educated at American universities -- but we're not getting any six degrees of Kevin Bacon here. While it's true that both movies feature members of the royal family, in only one of them do we witness a princess copulating with a catfish. ("The King's Speech" is a pretty good movie and all, but just a bit lacking on the aquatic bestiality front.)

Seriously, the real answer is almost nothing. Except that these two films are the most recent winners of the two most prestigious awards in international cinema -- the only ones that teenagers with movie cameras from Borneo to Omaha bother to fantasize about -- and the distance between them offers us a portrait of the diversity, and perhaps the schizophrenia, of global movie culture.

"The King's Speech" is a well-crafted, old-fashioned entertainment, a nostalgic costume drama aimed at middle-class adult filmgoers all around the world. It was constructed to win Academy Awards, and it delivered. "Uncle Boonmee Who Can Recall His Past Lives," on the other hand, is a highly personal art film made with nonprofessional actors, aimed at the tiny audience of global cinephiles who are willing to take this strange and original work on its own terms. It won the Palme d'Or at last year's Cannes Film Festival precisely because it makes no compromise with mainstream filmmaking conventions and ignores commercial considerations. If foreign-language art cinema attracts a tiny audience in the United States these days, Asian art cinema attracts nearly none. It goes without saying that "Uncle Boonmee" won't duplicate the $100 million-plus box-office returns of "The King's Speech"; it probably won't reach one-half of 1 percent of that number.

The sense that Oscar's best-picture award and the Palme d'Or are handed out in alternate and only faintly connected universes -- and represent radically different notions of what movies are and do -- is nothing new, even if it seems particularly exaggerated this year. But before we move to that level, let me grab a moment to try and un-scare you about "Uncle Boonmee." No, it's not for everybody and it isn't trying to be. But there's absolutely no reason you can't enjoy the sentimental, comic-inspirational history lesson of "The King's Speech" and enjoy Thai auteur Apichatpong Weerasethakul's gorgeous, loopy modern-day fairy tale about a dying man visited by ghosts and (apparently) figments and fragments of previous existences. After the Cannes premiere last year, a friend of mine described "Uncle Boonmee" as a "Buddhist tone-poem about death," and although he was being half-derisive, that's not a bad summary.

Although it may seem plotless by Hollywood standards "Uncle Boonmee" indeed has a plot, and one that's probably more comprehensible than Weerasethakul's best-known previous films, "Tropical Malady" and "Syndromes and a Century." Still, there's no denying that the last days of the eponymous Boonmee (Thanapat Saisaymar), a farmer near the forests of northern Thailand, are punctuated by unexplained leaps and caesuras, as well as by a visit from his wife (who's been dead for 19 years) and their son (who has been living in the jungle among a race of monkey-ghosts). That mythical-seeming liaison between a princess and an amorous jungle catfish, for instance, has nothing obvious to do with the rueful, leisurely tragicomedy of the main story about Boonmee, his visiting sister-in-law (Jenjira Pongpas) and a farm foreman cum Buddhist monk (Sakda Kaewbuadee). At first, I wondered whether I'd been so exhausted at Cannes that I'd failed to grasp the connection, but seeing the movie a second time confirmed that the answer is implied, or under the surface, or simply left up to you.

As the small but devoted following that has made Weerasethakul an international film-festival favorite already knows, his movies blend influences from both West and East, including surrealism and dream psychology, Theravada Buddhism and quantum physics, and Asian film from Yasujiro Ozu to low-budget pop Thai movies. (The Monkey Ghost costume worn by Boonmee's son, for instance, is silly and spooky -- and oddly effective in both directions.) He occasionally gets some stick from Asian critics for allegedly making films aimed at a Western elite audience, but they're missing the point. He may have more fans in Paris or New York than he does in Bangkok -- where the Thai government has intermittently banned his films -- but he's far from a household name in any neighborhood on any continent, and is likely to stay that way. "Uncle Boonmee Who Can Recall His Past Lives" is a rich, beautiful, haunting and sweet work from an accomplished dream-poet, who can stand alongside any other artist working in the medium. But it has almost no relationship to the expectations and associations that generally come with the sentence, "Let's go to a movie."

"The King's Speech" is, of course, exactly that kind of movie, almost too much so. Although wonderfully played by its cast and loaded with historical charm, the film is carefully paced and calibrated to deliver precisely the emotional beats the audience almost unconsciously expects. The internal life of "The King's Speech" derives entirely from the interplay of Colin Firth, Geoffrey Rush and Helena Bonham Carter; as cinema, it's strictly an efficient machine, which is what makes the best-director Oscar given to Tom Hooper seem so insulting in a field that included Darren Aronofsky, the Coens, David Fincher and David O. Russell. This is not "a movie that makes you dream," in David Lynch's famous phrase. (Even among this year's largely excellent list of Oscar-nominated films, only Aronofsky's "Black Swan" possesses that quality.)

If the yawning cultural and aesthetic chasm between "The King's Speech" and "Uncle Boonmee" represents the long-standing transatlantic divide that separates the Oscars from Cannes, it hasn't always been as dramatic as it looks today. As recently as 2002, a Palme d'Or-winning film -- Roman Polanski's "The Pianist" -- was a major contender in the Oscar race, winning awards for its star and director (although not for best picture). Only two movies have ever won both the Palme d'Or and the best-picture Oscar, and those may surprise you as much as they did me: Billy Wilder's 1945 "Lost Weekend," a soap opera of drunken madness starring Ray Milland, and Delbert Mann's awkward romance "Marty," with Ernest Borgnine, 10 years later. But quite a few Palme d'Or winners have gone on to significant critical and popular success and multiple Oscar nominations, including "M*A*S*H," "Taxi Driver," "Apocalypse Now," "All That Jazz," "The Piano" and "Pulp Fiction." (Quite a few more have won foreign-language Oscars, but nobody, frankly, cares about that.)

For roughly the past two decades, however, the continents have slowly been drifting apart. I don't mean America and Europe, where pop culture is no less hegemonic than it is here, but the floating islands inhabited by Oscar voters and Cannes juries. Of the last 10 best-picture winners, only "No Country for Old Men" even played at Cannes, while "The Pianist" and Michael Moore's "Fahrenheit 9/11" are the only Palme d'Or pictures since the mid-'90s to make any significant impact on the American consciousness. For every modest foreign-language success, like "4 Months, 3 Weeks and 2 Days" -- which did pretty damn well for a Romanian film about an illegal abortion -- there are movies like "The Class" (2008), "L'Enfant" (2005), "The Son's Room" (2001) or "Eternity and a Day" (1998), which virtually didn't exist for Yank viewers despite glowing international reviews.

Now, it'd be easy to conclude that art cinema has become too rarefied and self-reflective, or that Hollywood is overly concerned with delivering a prepackaged and predictable moviegoing experience, or that both things are simultaneously true. Indeed, I agree with that, about halfway: "The King's Speech" could use a bit of "Uncle Boonmee's" wandering water-buffalo spirit, and while I hesitate to tell Weerasethakul what to do, he could stand to edge half a step closer to the audience. But as his Buddhist tone-poem movie reminds us, life and death are cyclical, and the paths we travel converge and diverge. Frankly, it speaks well of international film's vitality that something as weird and lovely and completely uncommercial as "Uncle Boonmee Who Can Recall His Past Lives" can share the world stage with a film like "The King's Speech," if only metaphorically and for a fraction of a second. And if Colin Firth has sex with a fish in his next movie, you read it here first.

"Uncle Boonmee Who Can Recall His Past Lives" is now playing at Film Forum in New York and opens March 4 at the Laemmle Royal in Los Angeles, with more cities to follow.