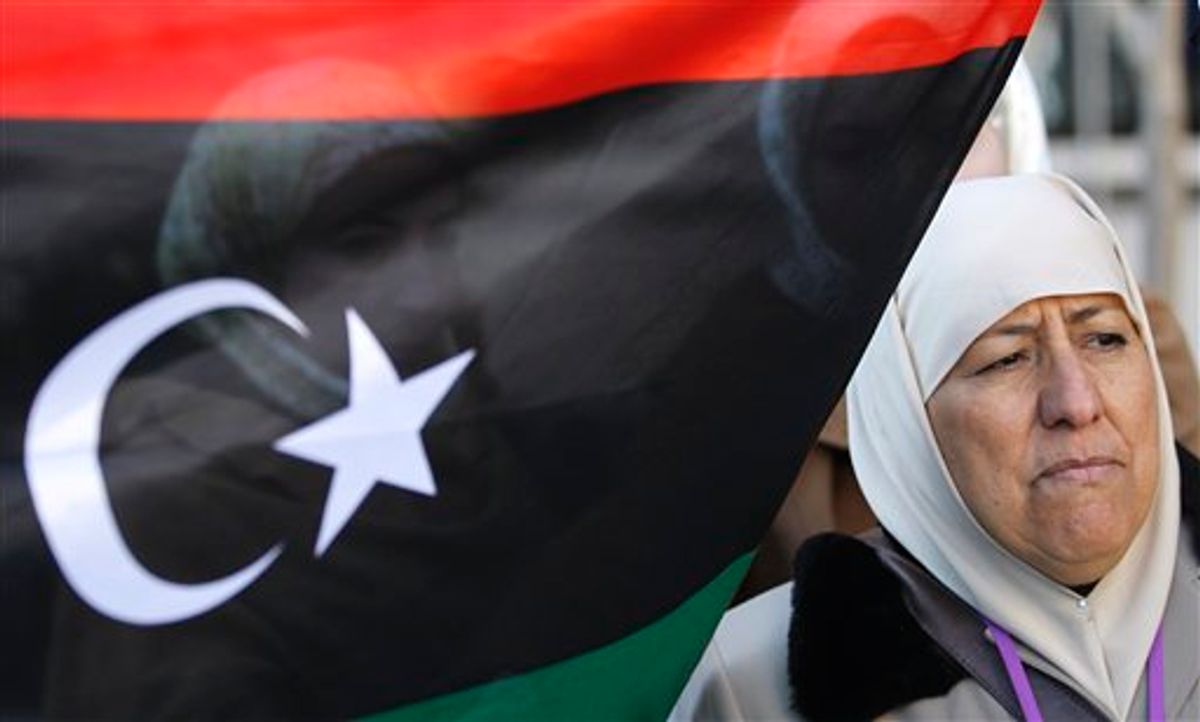 Short of a U.S.-led military offensive, international options to quickly force Moammar Gadhafi from power now appear to be highly limited, and Defense Secretary Robert Gates called for an end Wednesday to "loose talk" about steps that would amount to an act of war.

There are still hopes that U.N. sanctions and other diplomatic moves can undermine Gadhafi's authority, and Libyan rebels pressed their fight against troops loyal to Gadhafi on Wednesday.

But while a leading U.S. senator urged the Pentagon to be prepared to provide air cover for the rebels, there was little evidence of an appetite by the U.S., Europe or other powers to risk the consequences of military intervention.

Gates captured the mood in telling a congressional panel, "Let's call a spade a spade: A no-fly zone begins with an attack on Libya" to destroy its air defenses. His point: To ground Libya's air force in a way that minimizes risk to U.S. or coalition pilots would mean initiating an act of war in an Arab land.

The unspoken subtext is that with U.S. forces already deeply committed in Afghanistan, still winding down military operations in Iraq and on the watch for surprises in Iran and elsewhere in the suddenly volatile Persian Gulf region, the risks associated with military action in Libya might be unacceptable.

Alluding to Gates' announcement a day earlier that he had ordered two U.S. warships into the Mediterranean in case they were needed for civilian evacuations or humanitarian relief, Secretary of State Hillary Rodham Clinton said in separate testimony that the crisis could call for a mix of diplomacy and more.

"We are taking no option off the table so long as the Libyan government continues to turn its guns on its own people," she said.

Clinton said she feared the prospect of Libya becoming infested with al-Qaida or affiliated terrorist groups on the scale of Somalia, the Horn of Africa country where the al-Shabab terrorist organization has gained a foothold.

"One of our biggest concerns is Libya descending into chaos and becoming a giant Somalia," Clinton said. "It is right now not something that we see in the offing, but many of the al-Qaida activists in Afghanistan and later in Iraq came from Libya and came from eastern Libya, which is now the so-called free area."

Gates, in testimony before a House committee, decried "loose talk" about military options in Libya, noting that even a no-fly zone would be a major undertaking. He said it could be accomplished if ordered by the White House, but it would require more airplanes than are found on a single U.S. aircraft carrier, which typically carries about 75 planes.

"So it's a big operation in a big country," he said, adding that the U.N. Security Council has not yet authorized any form of military action in Libya.

In support of Gates' point, Adm. Mike Mullen, chairman of the Joint Chiefs of Staff, told the committee that despite media reports of Libyan aircraft attacking rebel areas, the Pentagon as of Wednesday had not confirmed any such attacks. He also said it must be assumed, in planning for the possibility of establishing a no-fly zone, that Libya's air defenses are substantial. Neither he nor Gates said explicitly whether they support or oppose such an operation.

White House Press Secretary Jay Carney, asked about Gates' comments, said, "The fact that the no-fly zone idea is complex does not mean it's not on the table."

Egyptian officials said two U.S. warships passed through the Suez Canal on Wednesday on their way to the Mediterranean Sea, closer to Libya. The amphibious assault ships USS Kearsarge and USS Ponce entered the canal from the Red Sea. The officials, speaking on condition of anonymity because they weren't authorized to talk to media, said the Kearsarge carried 42 helicopters.

There has been no consensus call from Congress for U.S. military action in Libya. However, Sen. John Kerry, chairman of the Senate Foreign Relations Committee, said Wednesday that while a no-fly zone over Libya is "not a long-term proposition," the Pentagon should be prepared to go that route if so ordered.

"The people of Libya do not ask for or need foreign troops on the ground," Kerry said. "They are committed to doing what is necessary, but they do need the tools to prevent the slaughter of innocents on Libyan streets, and I believe the global community cannot be on the sidelines while airplanes are allowed to bomb and strafe."

Senators, meanwhile, worked on an aid package to Arab countries to solidify democratic gains and improve relations with citizens in a part of the world accustomed to U.S. support for questionable rulers.

Kerry, D-Mass., said at a hearing attended by Clinton that "significant financial commitment by the U.S." was crucial to help what he called a "monumental and uplifting transformation" in the Mideast.

Some U.S. allies in NATO are mulling the idea of creating a no-fly zone over Libya. But Germany cautioned Wednesday against playing into charges that the West is unduly meddling in Arab affairs.

"I would advise that we conduct the debate ... about military options with all the appropriate caution and reserve," Germany's Foreign Minister Guido Westerwelle said in Berlin.

The U.N. Security Council slapped an arms embargo, a travel ban and an assets freeze on Gadhafi, his family and top associates during an emergency weekend meeting. It also agreed to refer the case to the International Criminal Court at The Hague -- a permanent war crimes tribunal -- to investigate and prosecute possible crimes against humanity. But the U.N. has not yet included an authorization for the use of military force against Libya.

Charles Heyman, a defense analyst and editor of The Armed Forces of the United Kingdom, said sanctions directed at the bank accounts and freedom to travel of high level Gadhafi supporters would have an impact. In his view, military intervention, including imposition of a no-fly zone, would prove to be counterproductive.

"A no-fly zone is the least bad option, but it's technically very hard to do and it costs a fortune and I don't think the U.S. or Europeans have to the money to spend now," he said.

Associated Press writers Bradley Klapper and Donna Cassata in Washington and Gregory Katz in London contributed to this report.