Matt Damon disappointed in Obama: "I no longer hope for audacity"

In a CNN appearance, one of the president's most vocal Hollywood supporters says Obama "misinterpreted his mandate" 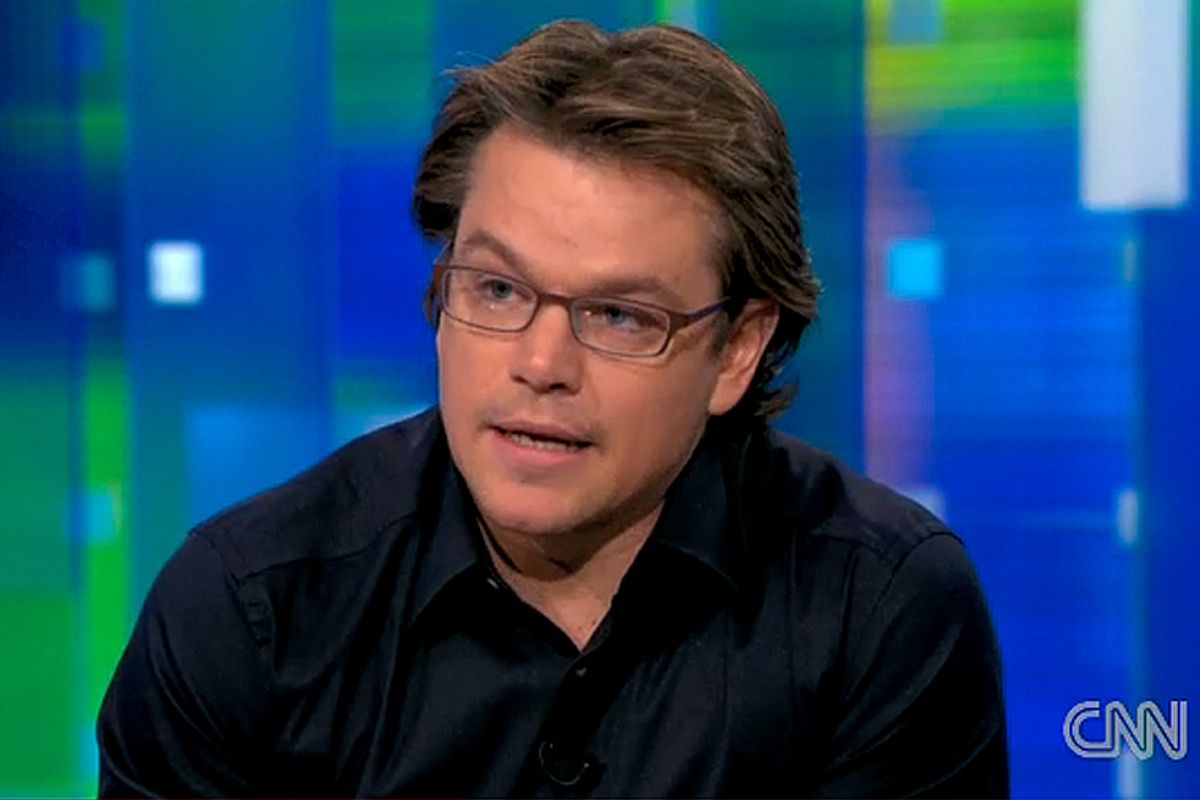 In an interview airing tonight on Piers Morgan's CNN show, Matt Damon says he is disappointed in President Obama. "I really think he misinterpreted his mandate," the actor says.

Damon, one of the president's most prominent film industry supporters and fundraisers, calls him a "deep thinker" and other complimentary things, but seems disillusioned overall. It is Damon's first public statement of disappointment in Obama since backing him for the presidency in 2008.

"He misinterpreted his mandate," says Damon, appearing on Morgan's CNN show alongside actors Emily Blunt, Anthony Mackie and John Slattery, his costars in the movie "The Adjustment Bureau." "He's doubled down on a lot of things ... In his State of the Union [address] he didn't even say the word 'poverty.' You've got millions of people languishing in it."

In videotaped excerpts from the show provided by CNN, Damon also says he "definitely wanted more" from Obama, and criticizes the president for not having a clear exit strategy in Afghanistan.  "I don't think the mission there has been very well articulated," Damon says. "And I think it would help to kind of reframe the way we're thinking about being there, and why we're there."

Damon also says the U.S. government has not meaningfully punished Wall Street for its "shameful" and  "dangerous" mismanagement by companies that "don't make anything [and] don't build anything." (Damon narrated "Inside Job," a muckraking documentary about the American financial meltdown that won an Oscar last Sunday.)

Are Damon's statements anomalous personal expressions? Or are they a sign that the Damon-Michael Moore-Alec Baldwin-Janeane Garofalo-Danny Glover contingent identified in the 2004 animated satire "Team America" is no longer inclined to give the president the benefit of the doubt on major issues?

Moore has been tearing into Obama for almost two years now, especially on Afghanistan, Iraq and corporate malfeasance.  Ditto Obama backer and longtime liberal activist Glover, who said over a year ago that he no longer saw much difference between Obama and former president George W. Bush on the same issues Damon raised today. "Whats so clear is that this country from the outset is protecting the interests of wealth and property," Glover said.