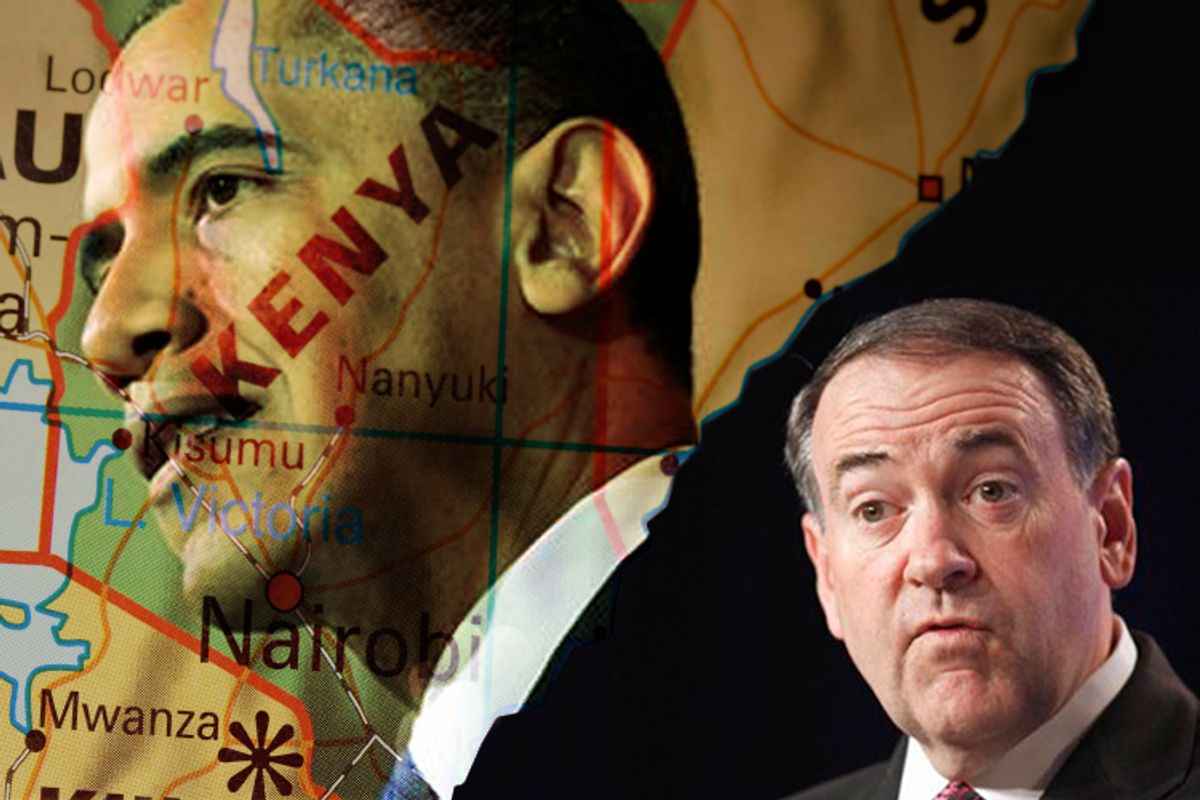 In his new book and in two media appearances this week, Mike Huckabee has argued that Barack Obama's behavior as president can be partly explained by his views of British colonial history in Kenya, where Obama's father and grandfather lived. Central to Huckabee's theory is that Obama has a different view of the 1950s-era Mau Mau uprising in Kenya than most Americans, and that that would, in turn, explain Obama's putative hatred for Winston Churchill.

Huckabee seems to be throwing around the exotic-sounding term "Mau Mau" every chance he gets, so I decided to talk to a historian about what actually happened in 1950s Kenya. The deeper one looks beneath the surface, the less sense Huckabee's narrative makes. Among other things, the suppression of the Mau Mau rebellion by the British involved the use of concentration camps and systematic torture -- so it's odd for Huckabee to be taking the British side in that conflict.

Let's first step back and take a look at what Huckabee has said. Here's the passage from Huckabee's new book "Simple Government" in which he seeks to explain why Obama returned a bust of Winston Churchill to the British government, which had given it to President Bush after 9/11 (Huckabee doesn't mention that Obama replaced the bust with an American, and a Republican, Abraham Lincoln):

The British newspaper the Daily Telegraph explained Obama's strange behavior: "Churchill has less happy connotations for Mr. Obama than for those American politicians who celebrate his wartime leadership. It was during Churchill's second premiership that Britain suppressed Kenya's Mau Mau rebellion. Kenyans allegedly tortured by the colonial regime included one Hussein Onyango Obama, the President's grandfather."

Every president is the keeper of our American narrative, "our story." He is the commander in chief, yes, but he is also commemorator in chief. Our wartime partnership with Winston Churchill and the British people is part of our story; the Mau Mau rebellion is not. When we elect a president, we entrust to him not just our security but also our story. The two are inseparable because our security depends on the story that we believe in, that inspires us, that we teach our children, and that we, as a nation, are willing to fight for.

President Obama's emphasis on his story rather than history has become symptomatic of his tenure. He is going to impose his agenda on Americans, and he doesn't care if we don't share it, don't believe in it, or don't want it.

Huckabee added in an interview Wednesday that his point was that, "due to Obama's father and grandfather it could be that [Obama's] version and view of the Mau Mau Revolution was very different than most of the people who perhaps would grow up in the United States." [Huckabee has since backed off his false claim that Obama grew up in Kenya.]

Where to begin with Huckabee's narrative? It is first of all worth noting that Obama met his father only once, when he was a 10-year-old boy, and he never met his paternal grandfather. So it's already a stretch to say that the political views of these men defined Obama's own worldview.

Despite that, I drilled down into the details of the tale with David Anderson, professor of African politics at Oxford, and author of a history of Mau Mau, "Histories of the Hanged: Britain's Dirty War in Kenya and the End of Empire." (See our Q&A below.)

I learned, among other things, that: While Huckabee implies that Obama's family was involved in the Mau Mau uprising, there is simply no evidence for that; the British suppression of the uprising involved routine human rights abuses; and, finally, while the uprising and the brutal British response happened while Churchill was prime minister, Churchill actually favored a negotiated resolution to the conflict, and did not support the violence.

It's also worth noting that the Daily Telegraph story about Obama's grandfather being tortured is based on the unsubstantiated claim by his grandfather's third wife to another British newspaper (she was 87 when she gave the interview). In Obama's own book, "Dreams of My Father," there is no mention of torture by the colonial regime, and his grandfather is said to have spent six months -- not two years, as the third wife claims -- in detention. More important, Obama's grandfather was jailed in 1949, three years before the Mau Mau uprising started. He was not a rebel fighter jailed by the British during that conflict.

So a fleshed-out version of Huckabee's theory would go like this: Obama's grandfather hated the British because he was (supposedly) tortured in prison under the colonial regime a few years before the Mau Mau uprising. Therefore, President Obama must take a different view of the Mau Mau uprising -- in which his family played no part -- than Huckabee, who apparently supports the brutal measures used by the British to defeat the rebellion. And because of all that, Obama replaced a bust of Winston Churchill -- who himself wanted a peaceful solution to Mau Mau -- with a bust of Abraham Lincoln.

Here's my Q&A with the historian David Anderson about all of this. It has been edited slightly for length and clarity.

Can you explain what the Mau Mau uprising was?

It was an armed rebellion against British colonial rule. It broke out in October/November 1952. Its principal motivation was to remove the British from Kenya and reclaim land for Africans who felt their land had been stolen by white settlers. The military campaign lasted eight years; it was a classic asymmetric conflict. The Mau Mau had no weapons. The British threw several battalions of troops at them, and there was acute brutality -- on both sides.

What does "Mau Mau" actually mean?

It's a shorthand for the Land and Freedom Army. It was supported predominantly by an ethnic group known as the Kikuyu, the people who occupy central Kenya. They are among the African groups in that region who were economically the most powerful and politically the most sophisticated at that time. The rising was primarily among one group, but it claimed a nationalist credential.

So this was basically an eight-year military conflict?

There was a state of emergency that lasted for eight years. The fighting was basically over within four years -- by 1956 most of it was over. But in the process, the British imprisoned more than 80,000 Kikuyu in concentration camps. There was a really heavy clampdown on the areas where the rebellion had begun. The counterinsurgency campaign was brutally oppressive.

Can you give some examples?

The internment of 80,000 people was without trial. In the camps, various techniques were used to extract information from them that amounted to systematic torture and brutality. Prisoners were routinely beaten, deprived of food, deprived of sleep. The word "torture" wasn't used but that is what we would call it now. Much of this was sanctioned by the British state, which essentially approved the use of violence in these camps.

You said there was brutality on the other side as well?

The brutality on the side of the rebels, the Mau Mau forces, was to be seen in the kind of killing -- because, for the most part, they were armed with machetes and knives. So victims were chopped, and in the Western imagination that's a pretty brutal way to die. The portrayal of the killings as being brutal was not because of their number and scale but because of the technology -- these guys just had machetes and knives so they chopped people up. At the time that was portrayed as savagery, but in fact the number of killings was very small. A great deal was made of it in terms of publicity.

Are we talking British victims?

Stepping back, how long had Kenya been a British colony, and what where they doing there?

It became a colony in 1895 when the British took over East Africa as part of the scramble for Africa among the European powers. There was a very slow process of settlement by whites -- there were only 40,000 settlers when the Mau Mau rebellion broke out in 1952. The central highlands are extremely fertile. The British were growing tea, coffee and other crops.

Going back to the Mau Mau uprising, what was the result in the end -- independence?

Well the British won the war but lost the peace. They defeated Mau Mau but in the process their reputation in Kenya was so tarnished that they left in four years. Independence came in 1963.

I get the sense from Huckabee's comments that this has been a contested history.

In the first place, the uprising was led by one Kenyan ethnic group, the Kikuyu. Many other ethnic groups did not support the rising. Even within the Kikuyu group, there was deep division. So one of the ways the British combated the uprising was to raise a militia among the Kikuyu to fight the rebels. In a way, this rebellion, by the end, had become a civil war with the British supporting one side. So much of the fighting was going on intra-Kikuyu. The British made it a civil war very successfully, to the extent that those divisions are still apparent today. In Kenya today, it's still politically very contested whether you should recall and glorify the rebellion, or whether you should just try and forget about it.

How was Obama's family involved in all of this?

To portray the Obama family as being part of Mau Mau is stir-fry crazy. Let me explain why: The Obama family come from western Kenya, which is about as different from Nairobi and the Kikuyu area as Utah is from New York City. And it's almost as far way. They come from an area where there was no rebellion, there was no Mau Mau. So while his father and his grandmother may well have been nationalists -- I'm sure they were -- they weren't directly involved in the Mau Mau rebellion.

The other thing is, if you've read anything about Churchill, you'd know that, although he was the head of the government at the time of the Mau Mau rebellion, he was trying as best he could to get the British in Kenya to negotiate and to end the fighting. Churchill was not supporting or condoning the violence. He is actually one of the few British politicians who comes out of this smelling of roses.